Can Bo Triplex Make His Mark?

One of Milwaukee's best bassists talks about his new band and life after Kane Place Record Club.

There’s something about seeing Bo Triplex (Eris Campbell) onstage, whether he’s fronting His Beautiful Band or supporting New Age Narcissism. His big smile, the way he plays the bass, his dance moves, and his overall energy are all captivating.

“That’s one of the things I’m most recognized for, my energy,” Campbell told me over drinks and tacos the other day.

The Milwaukee native has gotten used to getting props since his stint with the beloved but defunct local band Kane Place Record Club and with his recent work alongside New Age Narcissism. Now Campbell is looking to make a name for himself as a bandleader.

Campbell first picked up the bass at age seven and was shown the ropes by his father, a bassist himself. The elder Campbell was in a band called Purple Ties, who played Summerfest a few times but “were never that serious about it,” his son says. In middle school Campbell moved to alto sax. When he got to High School of the Arts he noticed there weren’t any bass players, so he returned to his original instrument. He played in some bands that did “typical high school band stuff,” like battle of the bands and trying to get an opening slot at Bay View Bash.

“A lot of those people are back on the scene again in their own way in different bands. I figured it was going to happen for them one way or another,” says Campbell.

After high school Campbell attended UW-Milwaukee for upright bass, but he found the program of little use. “You get a degree for music and you either don’t use it, or you use it and don’t make enough money to live comfortably as a musician. I did three semesters and by the third one I was totally checked out. You couldn’t get me to go to school that last semester,” he says, chuckling about the experience.

While at UWM a friend told Campbell about a band looking for a bassist. He auditioned for Kane Place Record Club and within two weeks they were playing a gig. Before Kane Place took off Campbell decided to head south and give Chicago a shot. He lived with another Milwaukee transplant named Lili K., who remains in the Chicago scene, but he spent most of his time with a musician named Peter Cottontale, who plays keys for Lili K., as well as in Chance the Rapper’s touring band.

“Peter produced the beat for “Brain Cells” off Chance’s first big mixtape 10 Day. I basically lived with him during the year leading up to that. I didn’t know how to produce at that point, I was just playing bass. I was always at Peter’s crib in the studio learning how to make beats. I was between Chicago with Lily and Peter, and Milwaukee with Kane Place. I moved back home because of finances, but I wasn’t ready to be living out there yet.”

When Campbell returned to Milwaukee his band Kane Place started to gain traction. It’s hard to describe their sound, which blends a number of influences, but their high-energy shows attracted a sizable fanbase. They performed at a host of street festivals and Summerfest (twice) and opened for Juicy J. But they failed to do some of the “basic professional band things” that take a buzzed-about act to the next level, he notes.

“There was no genre, no goal, no rules. We just made some shit, played some shows, stayed excited about it. When our album was finally finished we sold out Linneman’s for a dual release party with The Fatty Acids. They told us that was the first time in ten years that there was a line out the door and down the block for the whole show. But it took a long time for us to actually put that record out. We had no material for most of our career, and we never got a manager, never did merchandise or even planned ahead that much.”

Despite not being able to translate their hype into something more tangible, Kane Place managed to snag a 2014 88.9 Radio Milwaukee Award for their “Sunshine” video, after they stopped playing together. Yet there is talk of a farewell show and Campbell envisions it as a two-night event.

“We have too many friend bands in Milwaukee to not play with them before we’re done. It would be sad if we didn’t get to play with all our homies one more time.”

With the beat-making skills Campbell learned during his time in Chicago and a few tracks from Kane Place guitarist Nick Tovarek, he put out a mixtape around Christmas 2011. He used to rap as Boxxx back then, which is where Bo Triplex comes from. At the time he had a creative team and a clothing line that he plans to continue working on.

“After Kane Place happened I had another mixtape, but I didn’t build up enough street cred to drop that as a serious project. Also, I always wanted to branch out from just rapping, I wanted to have the live musical elements involved in the show.”

Campbell has now put together a backing band that he says is “very boss mode” for him. Unlike his experience with Kane Place, Campbell has full control of the new project, which has been described as urban funk, and has a grand vision he’s pursuing.

“This project is all about visuals. I’m in the process of transitioning from being a band to being a production.”

Last year Campbell wrote and produced four songs for the new project, playing all the instruments himself (his father taught him guitar and keys too), and recording them on his computer. His plan is to put those out for free and record live versions with his new band that will be available to purchase. Until that point he is building interest with a series of bass covers that began with Eric B. & Rakim’s “Paid in Full.”

“For my videos I pick songs that I think people will search and that I can break down into a simple form for basslines. “Paid in Full” is old school hip-hop, it’s just drum and bass. Rakim is like hands down the biggest baller, the original greatest lyricist of all-time, so of course I’m going to do one of his songs. I’ll do the bass covers at open mics and play them enough times where I don’t want to play them again, but I want them to still exist, so I record them, and made some videos with FunTV.”

His latest bass cover is a banger off Kanye West’s most recent album.

“Kanye is controversial and people are always interested in what he’s doing. I’ve loved him since day one, including Yeezus. The words in the song are powerful and deliver a message, it’s not necessarily my message, but when you strip it down like that it comes across way harder.”

These videos are just the beginning for Campbell, who has conceptualized a series to accompany the new material he’s playing with Bo Triplex and His Beautiful Band. He’s in the process of buying props and costumes and hopes to find a video production team to collaborate with him. As our conversation came to a close I told him a bit about myself and all the traveling I’d done before moving back to Milwaukee.

“No offense, but I’m not a traveler. Seeing the world doesn’t appeal to me yet. I want to have something for people to come see before I go see some cool shit. I feel like I need to make a mark and then I’ll go see these other marks around the globe.”

Bo Triplex and His Beautiful Band play Mad Planet on Thursday April 16 in support of Airo Kwil’s album release. Show starts at 9pm. Tickets are $5 or $8 with Airo Kwil’s CD. 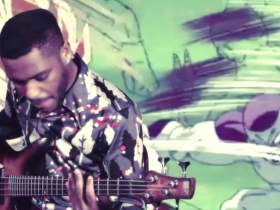 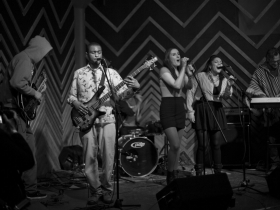 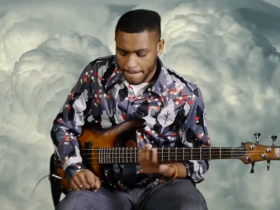