Petition by black moms and grandmothers points to problems caused by "gun culture."

By Teran Powell, Milwaukee Neighborhood News Service - Apr 14th, 2015 11:11 am
Get a daily rundown of the top stories on Urban Milwaukee 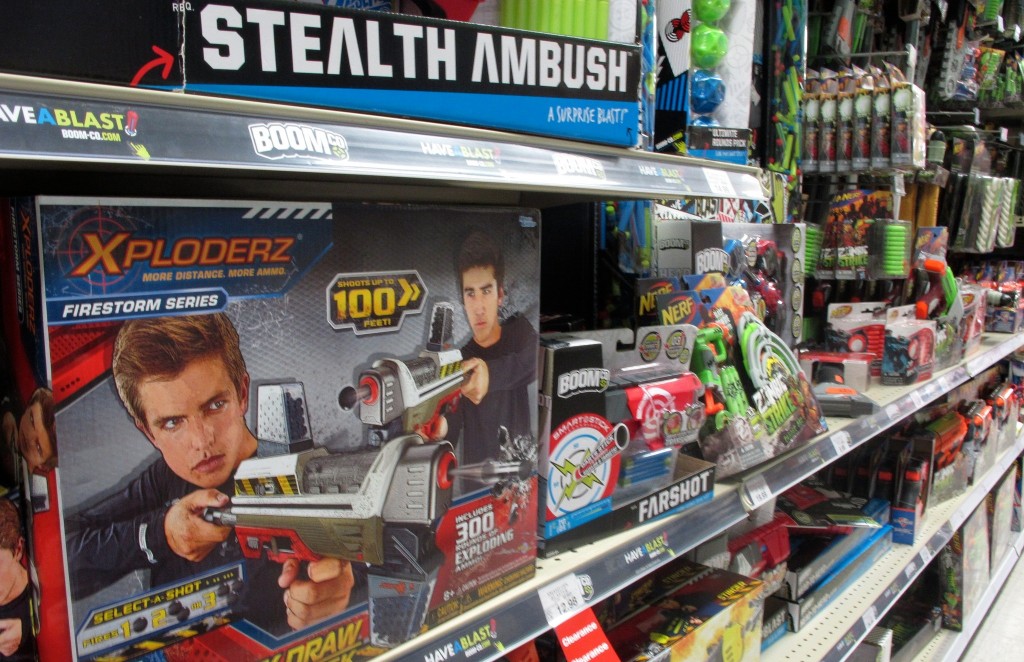 An aisle at a local toy store is devoted to guns and other weapons for young boys. (Photo by Teran Powell)

Kimberly Carr, a 45-year-old mother of two teenage boys, worries that when children play with toy guns, it could lead to gun violence.

“My fear of toy guns for young children stems from the fact that young babies are introduced to the gun culture at such a young age and grow up to think that having guns is okay,” Carr said.

Carr lost her godson about a year ago to gun violence.

“Kids try to reenact what they see on TV thinking that it’s okay, not knowing the consequences that come with guns,” Carr said.

She mentioned being disturbed by a photo she saw on Facebook that displayed dollar bills and a toy gun strewn on a bed, with a caption referring to them as a child’s toys. She knows the Facebook user’s child is only 4 years old.

Concerns like these prompted the Black Health Coalition of Wisconsin to start a petition entitled “Black Moms & Grandmothers Against Toy Guns!” Dr. Patricia McManus, president and CEO of BHCW, said she included “grandmothers” in the name of the petition because of the “influence grandmothers have over their sons and grandsons.”

The goal of the petition is to find ways to save black children, especially black boys, and address the violent culture that Americans live in, according to McManus.

“The impact of kids playing with guns is clearly more pronounced in black communities than in others,” McManus said. For example, a study by the Pew Research Center based on injury data compiled by the U.S. Centers for Disease Control showed that the gun-related death rate among black Americans exceeded the national average by 80 percent or more each year between 1990 and 2010. The study also showed that the rate of nonfatal gun crimes among black Americans exceeded the national average each year from 1993 to 2011; in 15 of those years, it was more than double.

A friend of McManus’s suggested the petition idea to her after seeing several incidents of children harmed by playing with toy guns. In one incident in Cleveland, 12-year-old Tamir Rice was shot and killed by police when officers mistook Rice’s toy gun for a real one.

McManus described her own experience seeing a child with a toy gun that cemented her decision to get behind the petition. “This past summer, I looked out my door and there was a kid standing there … he couldn’t have been more than 8 or 9 years old,” McManus said. “He had this gun, which turned out to be a toy gun, but he had it down to his side the way that you would see an adult on TV in the streets carrying a gun.” 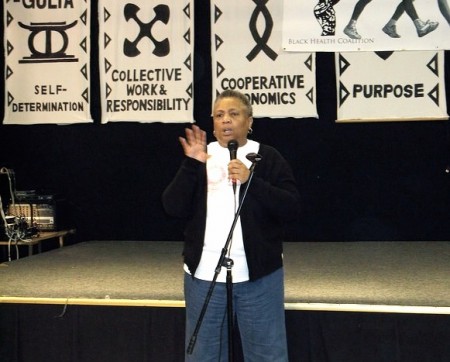 She was alarmed that someone would think the child had a real gun. “Having our children playing with toy guns only reinforces the problem,” McManus said.

Déwayne Patrick, a father of two sons, said he doubts the petition could make much of a difference, and recommends a different approach.

“I don’t think it holds much value because toy guns bring in money,” Patrick said. “Guns are popular. You can’t play cops and robbers without a gun or play cowboys and Indians without a gun. There are always gonna be gangsters, cowboy movies.”

“There are subliminal messages put into our head by Hollywood and TV that fuels this gun culture… these are the biggest influences,” said Patrick, who has lost friends and family to gun violence.

He believes that to help solve the problem the black community should boycott stores that sell toy guns. “We can’t just talk about what we could or should do,” Patrick said. “We have to boycott first of all and stop spending money in their stores.

“If it doesn’t hurt someone economically, no one is going to listen to what you say.”