In just a few months, Gov. Walker has become the leading alternative to Jeb Bush. 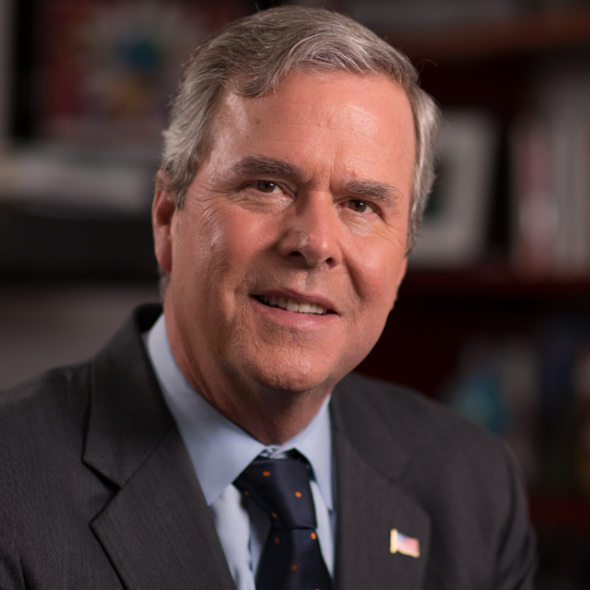 Wisconsin is famous for its uber-thrifty, coupon-clipping folk, and Scott Walker has learned that culture well, if we can believe his by-now standard stump speech running for president:

“I go to that Kohl’s rack that says it was $29.99 and now it’s $19.99. And then I get the Sunday insert out with that little scratch-off, and I take it up to the cash register with my Kohl’s credit card. And then I take the mailer that we get because we shop there a lot. And sometimes it’s 15 percent or 20 percent off. And, if we’re really lucky it’s 30 percent off… And then we pull out the Kohl’s Cash and we lay that out on the counter. And the next thing you know they’re paying me to buy that shirt.”

The conservative Republican crowds Walker is courting apparently love it, and the little homily hammers home that he’s the everyman candidate, unlike a certain plutocrat widely seen as front runner for the GOP presidential nomination. “We didn’t inherit a lot from our family. We certainly didn’t inherit fame and fortune,” Walker told Republicans in South Carolina.

Yes, Walker lets the crowds know his father was a small-town preacher and his mother’s family did not have indoor plumbing until she went to junior high. Next we’ll be hearing about the primitive state of his great grand-parents privy.

The message behind all the folksiness could hardly be clearer: Walker is the anti-Jeb, the un-Bush, as different as different can be. Jeb Bush is country club, Walker is Sam’s Club. Jeb was born to wealth, Walker to small town humility. Jeb is the grandson of a U.S. Senator and son and brother of presidents, Walker built a political career all on his own. Jeb is a fancy intellectual, a voracious reader and self-described nerd, while Walker is more down-to-earth, a college dropout who never mentions books and seems uninterested (if not downright scornful) of the intellectual world.

Then there’s the age difference. Baby boomer Jeb is 62, Gen Xer Walker is 47; as he puts it, “If we’re running against Hillary Clinton, we’ll need a name from the future – not a name from the past –  to win.”

Walker also offers a clear contrast on the issues. He flip-flopped early on as governor and decided he opposes the Common Core education standards, which Bush supports; and polls show 52 percent of potential GOP primary voters unfavorably view a candidate who supports them. In addition, 62 percent of them are opposed to a candidate who supports a pathway to citizenship for undocumented immigrants, and here, too, Bush seems less tough on immigration than Walker (though both have gone back and forth on the issue).

Bush gave an early speech in Detroit to dramatize the need to give more opportunity to those left behind by the changing economy. Walker, by contrast, crows about slashing benefits for public employees and drug testing of food stamp recipients. It’s a battle for the soul of the Republican Party. Bush wants to expand the ever-tighter Republican tent to embrace an ever-more multicultural nation, a quest dramatized by his Mexican-born wife and his ability to speak Spanish. Walker’s strategy, by contrast, is to hammer harder on the tent stakes.

Walker is the red meat Republican, throwing every bone he can to hard-core conservatives. He is running to win the primary (and then watch him scurry toward the middle, as he did in the 2014 governor’s race). Bush, by contrast, is running more with the general election in mind, trying to avoid boxing himself into a right-wing corner, as Mitt Romney did to win the 2012 nomination. But that only works if Bush wins the nomination.

And that’s far from assured. “If Jeb could just run against, say, Carson, Huckabee and Cruz, it wouldn’t matter that voters don’t want to be represented by another scion of the Bush dynasty,” writes New York Times conservative columnist Ross Douthat. “But right now, in Walker and Marco Rubio, Bush faces two opponents whose backgrounds and identities — the working-class slayer of unions, the self-made immigrant’s son — match the way Republican voters want to think about their party in a way that a silver-spoon politician, whatever his record, never will.”

And right now, it’s Walker, not Rubio, who is by far the tougher opponent. Walker has come from nowhere: a year ago he was behind five or six GOP candidates and rarely mentioned, but by late February he had risen ahead of everyone but Bush. Real Clear Politics shows the change over the last year in the polls and now has Bush and Walker as a virtual tie.

The Bush approach has been to corral all the top GOP advisors on foreign policy (Walker could certainly use some of them) and grab all the campaign donations, thus making his nomination an inevitability. But the latter is much more difficult in the post-Citizens United era, when there are few restraints on donations from the wealthy and far more money is available.

Indeed, Walker, always an aggressive campaigner, is having a good deal of success in this sphere. As CNN reported, “several GOP operatives in Bush’s orbit conceded… a substantial chunk of GOP financiers have taken a liking to (Walker). And Republican fundraisers have told CNN donors are lining up to meet with him as he’s rocketing up in the polls. In California, Florida and New York — all states with large pools of potential donors attractive to candidates — Walker has come away with commitments from millionaires and billionaires who will help him compete financially against Bush.”

Meanwhile, Bush’s early poll numbers “are strikingly weak when you factor in his famous name and the enormous expectations surrounding his candidacy,” MSNBC notes. “His support in national polls is running in the mid-teens. To put that perspective, just look at how recent GOP nominees were faring in polls at roughly this same point in their campaigns:

As the story notes, John McCain and Mitt Romney both polled in the teens (like Jeb) at this point of the primary, but both McCain and Romney “were forced to endure much trickier paths to the nomination.”

In short, Jeb Bush’s front runner status is a tad shaky, Walker has emerged as the clear alternative and it remains to be seen if Rubio (who must fight Bush from the same state base of Florida) will run. Ted Cruz immediately shot up in the polls after announcing his run for president, but Walker remains the candidate with the highest favorability rating from Republican voters, as a new Monmouth University poll found.

“Scott Walker may be that rare candidate who has true cross-over appeal in all wings of the GOP, ” as Patrick Murray, director of the Monmouth University Polling Institute, noted to the Washington Times. “The more Republican voters get to know him, the more they like him; and that goes for conservatives, moderates, and Tea Party supporters alike.”

The ever-wily Walker did a wonderful job of damning Jeb Bush with faint praise. “Jeb’s a good man. You’re not going to hear me speak ill will of Jeb. He’s a friend of mine,” Walker told the Washington Post.

Then he went on to suggest that Bush was “a name from the past” who is simply cashing in on past favors owed to his family: “There’s a lot of people who are loyal to that family because of an ambassadorship or an appointment or something like that, so those people are going to show up big on his first report. What we’re hoping going forward are not donors of obligation but donors of passion, people who are passionate about the reforms we bring to the table.”

With friends like that, Bush may be thinking, who needs enemies?