Not Riding a Bicycle is Hazardous to Your Health

Even factoring in occasional traffic deaths for bicyclists, they live longer, healthier lives than automobile drivers.

By Dave Schlabowske, Bike Federation of Wisconsin - Apr 3rd, 2015 11:15 am
Get a daily rundown of the top stories on Urban Milwaukee

One of the Facebook comments we got about our post describing Colton King’s death asked the following question:

Biking is great, but why do bicyclists ride on highways? One, you breathe deeply all the exhaust fumes, and two you are constantly in danger of being killed or maimed. I agree that transportation should be different, but riding so close to all the exhaust pipes and even one sleepy or inattentive driver is just not smart. Same for runners/joggers on highways and country roads….My sympathies to his family.

I thought the question was asked in a respectful manner, but it reflects what I find to be an illogical culture of driving we have in the United States. I try to answer questions like this in a way that helps people consider a new paradigm in which transportation mode is chosen by what makes sense instead of the way most people get around. Below is my response:

Remember Colton was riding his bicycle to work on a two-lane county road, not a highway, because it is the only road that goes to his workplace. But why not ask that same question of people in cars?

Why do people all group together in cars and drive on the same highway, at the same time, create congestion and breathe each other’s exhaust, even if it is unhealthy, expensive and most deaths occur on interstates and highways? They do it because those are the shortest, most convenient routes to get where they are going by car. In the most of United States, most people never even consider using transit, walking or bicycling.

Sadly, that is true even though about half of all vehicle trips in the United States are ten miles or less, an easy bike ride. What if we removed half the people driving on our roads and convinced them to do what Colton did, ride their bicycle for short trips? If we could do that, everyone could breathe cleaner air, our healthcare costs would be lower, we could cut our transportation budget almost in half, reduce the gas tax, reduce carbon emissions and everyone would benefit. But the biggest benefit would be to the people who stopped driving short trips and began bicycling.

We have a culture of driving in the United States, even for very short trips. Incredibly, about 40 percent of all trips are two miles or less, yet 80 percent of those trips are made by car. The Wisconsin Bike Fed is working to encourage people who like to ride bicycles to take those short trips by bike instead of in a car. One of the reasons people tell us they don’t ride bicycles more is because they are afraid of riding on roads like County A, roads that have no shoulders, or roads with higher speeds, and roads that have heavy traffic. The Bike Fed is working to make those roads more comfortable places to walk and bicycle by adding paved shoulders, bike lanes, side paths and sidewalks.

It is important to remember though, even in the light of this tragic death, that in general, bicycling remains an incredibly safe thing to do, and it keeps getting safer every year. Even breathing other people’s exhaust, bicycling is healthier than driving a car. If you factor in the reduced risk factor for obesogenic illnesses, riding a bicycle is probably safer than driving a car.

I hope my response helps reframe your question. Changing the way people think about how we get around takes time, but we are making progress.

Recently there have been some studies done to quantify the relative risk of cycling and weigh that against the health benefits. 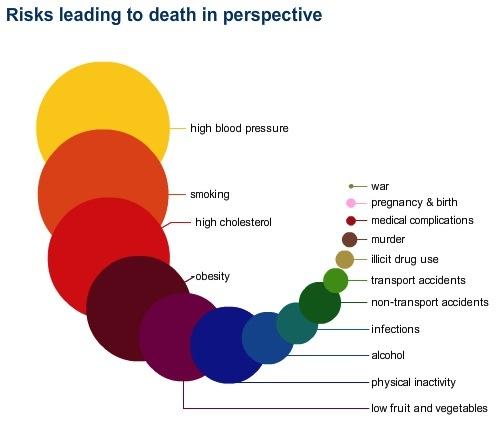 Many of he biggest risks we face in life can be reduced with one simple tool: the bicycle.

For individuals who shift from car to bicycle, we estimated that beneficial effects of increased physical activity are substantially larger (3–14 months gained) than the potential mortality effect of increased inhaled air pollution doses (0.8–40 days lost) and the increase in traffic accidents (5–9 days lost). Societal benefits are even larger because of a modest reduction in air pollution and greenhouse gas emissions and traffic accidents.

Conclusions: On average, the estimated health benefits of cycling were substantially larger than the risks relative to car driving for individuals shifting their mode of transport.” Source: Do the Health Benefits of Cycling Outweigh the Risks? Jeroen Johan de Hartog1, Hanna Boogaard1, Hans Nijland2, Gerard Hoek1

I have shared the following graphic many times, but I will continue to share it whenever people worry that riding a bicycle is dangerous, complain that traffic is just getting worse and worse, or admonish people for taking their life in their own hands by riding a bicycle in traffic.  The fact is that bicycling is safe and keeps getting safer all the time.

All the risk assessments like the one above tend to show the risk of death for bicycling is lower than the risk of death in a motor vehicle. Some still argue we don’t have the best data for bicycling to fairly compare it to other activities that have been studied more. But even if you question all the studies, the statistics and the science, I find it hard to argue with the idea that it is unhealthy and wasteful to drive trips two miles or less when there are other healthier, safer, less costly options available.

6 thoughts on “Bike Czar: Not Riding a Bicycle is Hazardous to Your Health”