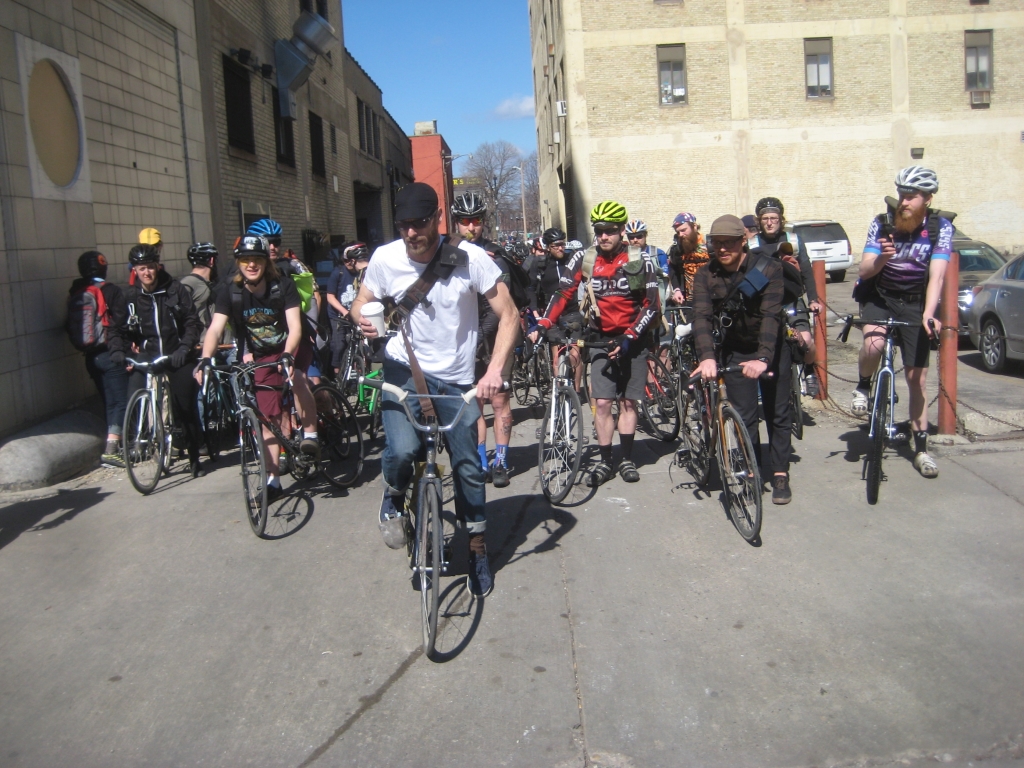 They’re off — just at the St. Patrick’s Day Parade is over. Photo by Michael Horne.

For the 14th year, the Milwaukee Messenger Invitational Alley Cat Bicycle Race enlivened the streets of Downtown as scores of racers replicated the day-to-day “routine” of the courier class. The event kicked off Saturday, March 14th, and is we were there to record the festivities.

At 10 a.m., the doors are opened at the alley entrance to Breakaway Bicycle Couriers, 224A W. Wells St., at 10 a.m. for coffee, bananas, pastries and beer. The coffee is poured by Cohl Wiesbrook-Peterik, who hauled his Rusty Chain bicycle java cart to the event, as he has in years past. Breakaway, established in 1998 by Wayne Wallner, is the closest thing to a 19th century bicycle clubhouse as you are likely to get these days. It shows the accumulated detritus of 17 or so years of the comings and goings of delivery people. Hundreds of post-it notes decorate a wall, along with such other vintage items as laminated maps and old yellowing newspaper articles from back in the print era.

Today maps and articles are on-line, and in every messenger’s mobile device. Of course, the headquarters of the race is filled with bicycles, occasional places to sit, nooks and crannies and amusement devices including a foosball and a pool table. On race day, the pool table is covered with a Wisconsin state flag, and the surface is used as a registration area. Cartons of Pabst Blue Ribbon Beer with thirty cans each begin appearing at the door and are dumped into a bucket of ice next to last night’s empty keg of Lakefront Fixed Gear beer. There’s more of that in the fridge.

Outside the couriers gathered to eat, drink and chat. Quite a number of them are not familiar faces. These are the folks from out of town, notably the Twin Cities and Chicago, with the occasional sprinkling of Indianapolis and points beyond. 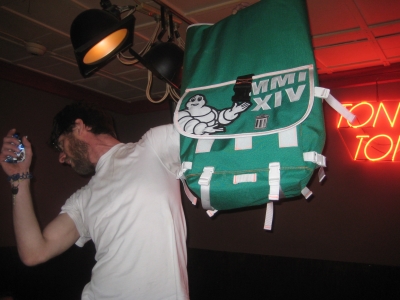 The MMI is a well-recognized event. Perhaps a half or more of the racers are visitors, but many of these know Milwaukee well thanks to this event and summer’s Riverwest 24 Hour bike race.

Local folks included Eric Von Munz, who designed the highly coveted race T-Shirts. Some of his silkscreen posters provide the brightest points of the Breakaway Club House interior. Steven Feih of Milwaukee Courier Company and Peter DiAntoni of Flavor Cycle are also among those in attendance, with DiAntoni being on a Bullit cargo bike, as is Kevin Ward and Steve “Curry” Bilek, who rides his into town from the west side every day to his job at Journal Communications. Ward, formerly a messenger at Milwaukee Courier Co., now finds satisfaction working with kids at Dream Bikes.

By noon the registration desk opens. Organizer Diane Raines hauls out a fresh box of Crayola crayons, each one a different color. Another box held the green spoke cards that will be a coveted keepsake for some, and provide an easy means to identify fellow riders as they are encountered over the months to come. They’ll stay in the wheels until the Riverwest 24 rolls around in July. Brennan Kreiman, a messenger with a master’s degree, is first in line. He will be Racer No. 1. But will he finish first?

Raines also opens a box with the top-secret manifest for the race. And here, things get interesting. Woe to the racer who fails to read the manifest’s fine print.

The MMI 14 Rules are numerous and exacting. Despite the fluidity of the messenger life [#messlife], the business routine of delivering parcels and envelopes has its constraints, not the least of which is the economic value of the products delivered, and their frequent essential nature for the companies that rely on bicycle messenger services. That little envelope from Whyte and Hisrchboeck might have a ten million dollar check inside. The box from the photo supply house might have a $75,000 lens. It all has to get where it is supposed to go, in proper shape and in good order.

With the manifests in hand, the racers have still only partial information about the race ahead of them. Still unknown, and to be revealed as the race goes on, are such things as the location of certain critical drops, not to mention the location of the eagerly anticipated finish party, where prizes will be awarded, and more beer will be consumed.

But, first to the rules, and the first rule is, “Safety First. None of the prizes will pay your medical bills.”

Each racer is issued a crayon. He or she must treasure this item, and return it at the end of the race, with his or her race number written on the crayon itself. This is one of the many race rules; failure to follow it could result in disqualification.

Riders are required to fill in a box on the manifest with his or her crayon “before leaving registration.” The pool table provides a handy surface for that task. Riders and crayons will be eventually dispatched to unknown locations, where they are to create rubbings “created from raised characters at designated locations by placing empty box over characters described in boxes 16-18 and rubbing with BROAD SIDE OF CRAYON TIP until said characters appear.”

Racers will also have to pick up a fifty-cent Pick 3 lottery ticket somewhere on the route, and it is to be “paper-clipped with the paper clip provided,” which happens to be a nice shiny brass number.

About a dozen volunteers who will be manning the checkpoints get their marching orders at a closed-door meeting at 12:30. They are issued packages of their own, each with sheets of adhesive labels suited to their designated location. 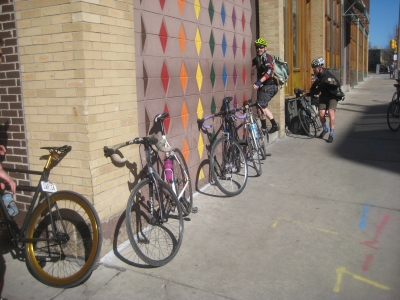 Bikes are lined up at the checkpoint at This is It, 418 E. Wells St. Photo by Michael Horne.

At 1:45, the 66 or so racers who paid their $10 roll out and on to W. Wells St., which is just clearing itself from the aftereffects of the annual St. Patrick’s Day Parade which drew thousands downtown. Racers will be on their way to such divergent locations as Potbelly subs (both E. Wisconsin and N. Prospect avenue locations), Anodyne Coffee (224 W. Bruce St.), Great Lakes Distillery (616 W. Virginia St.), the DiSuvero Sunburst Sculpture (take that, AM Talk Radio!), the Swingin’ Door Exchange (the birthplace of the 19th century bicycle messenger industry at 219 E. Michigan St.), Jamo’s at 1800 N. Arlington Place, and other locations, including This is It, 418 E. Wells St., where the few lucky customers at Milwaukee’s oldest gay bar got quite an eyeful as lithe young messengers hit the checkpoint. Each checkpoint, manned by volunteers, issues a sticker to place on the manifests.

Finally, the location of the end of the race is revealed to those who have completed the race’s requirements, and who have “placed their labels securely in corresponding numbered boxes” and have all 38 boxes filled in. Things will wrap up at the Y-NOT II. Failure to find its hidden door at 1506 N. Lyon St. may result in disqualification.

As Shaggy and Diane await the first racer, the bar is quiet. The first racer comes in and learns within seconds that he is disqualified. But he wasn’t a dick about it to the organizers. He just took it out on his bike helmet outside. Then off to the party!

Jake Newborn, the Safe Rides to Schools coordinator for the Bicycle Federation of Wisconsin is there with Nicole LaBrie, herself a former Breakaway messenger (code name: “Token.”). Their daughter, July, is at home with grandma. Tom Guenther, a former Milwaukee messenger, is up from Chicago, where he stays busy on the bike and with a thriving career in art. He brought a young messenger friend with him to teach the cub the ropes about how we party in Cream City.

The racers come in, the manifests are scrutinized, and the prizes are handed out. Kreiman, who has organized and won a number of alleycats, takes home the prize MMI messenger bag. He was the only racer to thank the organizers, he was told. Giving thanks always qualifies. 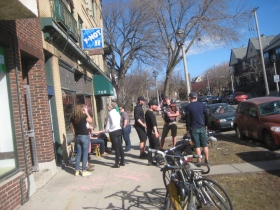 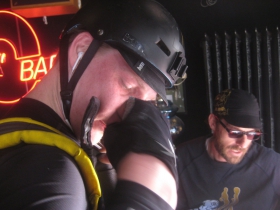 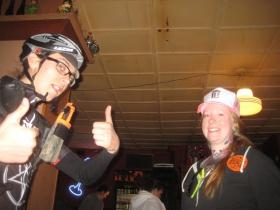 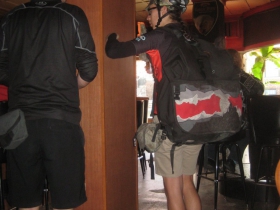 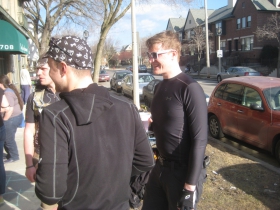 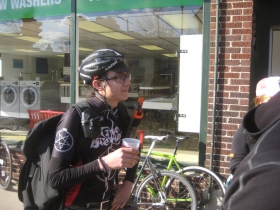