Dive-bar exterior obscures remarkable selection of micro-beers and countless liquors you may never have tried. 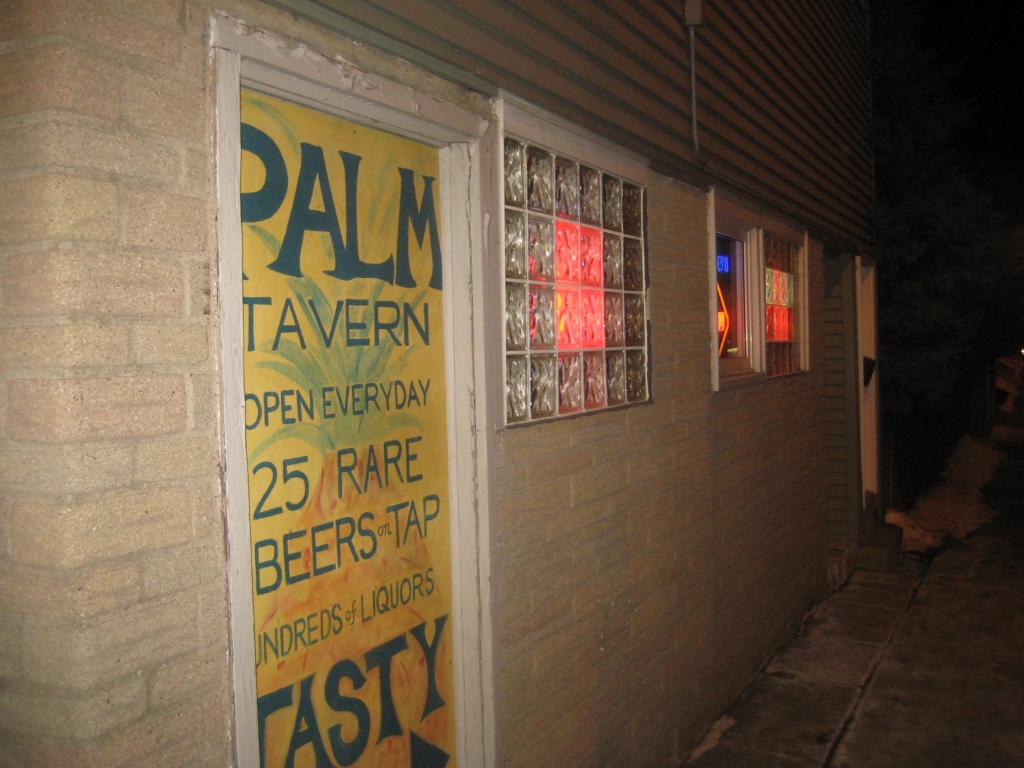 Milwaukee has a long history of upscale businesses in commonplace surroundings. Places like Bryant’s and At Random — both cocktail lounges — are located in unassuming buildings in working class neighborhoods, yet offer a very sophisticated experience.

You can add Palm Tavern to this list. Established in 2003 by husband and wife partners Bruno Johnson and Adrienne Pierluissi in an 1890’s building, Palm has a dive-bar exterior. Yet a painted sign that looks like something you’d find on a convenience store announces that the place has “25 rare beers on tap. Hundreds of Liquors. Tasty,” elevating it beyond dive-bar status and that of the immediate neighborhood, which is the south end of Bay View.

Once inside, the tavern reveals itself as a very cozy and conversational place. Paintings by Adrienne Pierluissi line the tavern’s walls. Five round tables with wire chairs face bench seating made of wood. The red walls are of textured plaster, and an old tin ceiling is above. The bar has 15 padded, backed, swivel stools and there are more benches and a couple of tables with wood chairs in the barroom.  Those looking for the latest sporting event on television are advised instead to try their telephone screen. No TV here. Nor is there any Miller beer here. In fact, there is hardly any beer you’ve ever heard of, and the same goes for the booze, too.

There are four tap towers on the bar, offering everything from Alaskan Big Mountain Pale Ale [$6 for 16 oz.] to Tyranena Devil Made Me Do It Porter [$6.50 for 12 oz.]. The only Milwaukee beer among the 25 on tap is Brenner Brewing Company’s City Fox Pale Ale, which, at $5.50 for a pint, is what passes for a bargain — for despite the neighborhood, this place is not cheap.

But, you have to pay for quality, and the inventory of liquors is likely the largest on display at any tavern in the city. In fact, the bar has a separate bar behind it to display even more of the hundreds of bottles of high-end spirits. This well-lit bar is the most visible feature of the place, which is otherwise quite dark. A pair of ceiling fans keeps the atmosphere fresh. The Palm has been non-smoking since 2008, before the state’s smoking ban went into effect in July, 2010. A signed poster of The Damned’s St. Valentine’s Day Massacre Chicago concert of 1982 is one of the few non-original artworks in the place, which is also blessedly free of tacky beer and whiskey ads and posters.

Nor will you find dart boards, pool tables or other diversions like amusement devices here. For one reason, they would detract from the pleasure of drinking the good stuff. For another, there’s just no room in the 1,186-square-foot tavern. Not for the Palm these silly games, but rather informed educational classes like the one bartender Matt Tunnell offered on Highland and Speyside Scotches earlier this month.  “$25 gets you six samples and more knowledge then you will be able to keep in your boozed up brain,” the tavern announced on its Facebook page. 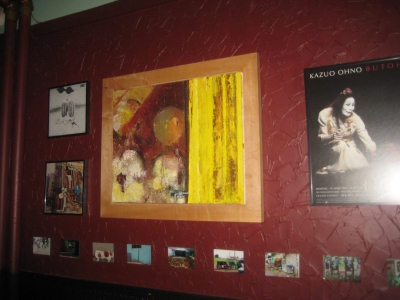 The bar also had a pre-St. Patrick’s day Irish Whiskey tasting. “We won’t be offering shots of Jamo or Powers, but we will explore the fresh diversity that in the category of Irish whiskey,” the Facebook page announced.

Your fellow customers are from the neighborhood and regions beyond. Most study the binder-thick drink menus quite seriously, and the air is filled with earnest debate as to whether tonight is a 7-year or 12-year Scotch night. And what spirit best pairs with a Duchesse de Bourgogne Flemish Sour Ale? My goodness, the staff here can actually answer that question.

The tavern occupies what had been two storefronts in the old building, which is located on a 3,600-square-foot lot developed as part of Bay View Brick and Real Estate Subdivision #1. The land is valued at $11,700, or $3.25 per square foot, while the building, which includes the tavern and an 830 square foot apartment above (apparently owner-occupied), is valued at $250,300, for a total assessed valuation of $262,000. Taxes are $8,065, and are paid on the installment plan by Pierson Properties, LLC., which was founded in 2003 by Bruno Johnson about the time he opened this place with his wife. [The couple also operate Sugar Maple with 60 tap beers at 441 E. Lincoln Ave. on the north end of Bay View.]

The tavern is also part of the Kinnickinnic Avenue Business Improvement District #44, but the south side of the district, where the Palm is located, has a greater proportion of non-contributing properties (homes) than does the north side, where all the attention is directed these days. But as the city grows toward the south, and approaches the great St. Francis – Cudahy – South Milwaukee tetraplex, expect this area to become a focus of redevelopment, or, at the very least, Business Improvement. It’s nice to have a place like the Palm leading the pack in this effort.

In 1910 an old barn on the site was razed, and in 1922, property owner Steve Panczak put on a 9 foot wide, 40 foot long, one-story addition to the south of the property as a store. In 1928 Panczak altered the front of the building, removing the old storefront and replacing it with another. In 1931, Mrs. Kate Panczak operated the place as a “Grocery and Fruit Market,” she said. But by April 28th, 1933, the grocery’s days were numbered as the place applied to become a newly legal tavern.

By July of that year, Victor Fischer was listed as the owner of the real estate when Thomas Fellows took out a permit to operate a “Tavern — no dance floor” in what he called a former “soft drink parlor.” This makes us wonder exactly what kinds of groceries and fruits Kate Panczak had been selling during prohibition, since the drinks often served in such parlors were anything but “soft.” 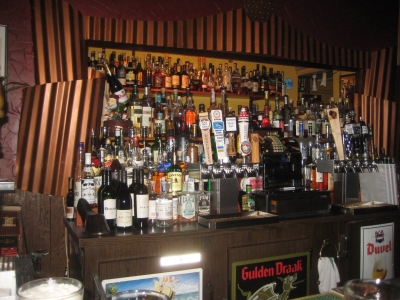 Some of the options at the Palm Tavern. Photo by Michael Horne.

The inspector had some problems with Fischer’s plan of operation. Access to the “ladies toilet room on 2nd floor thru kitchen of owner of the building,” he noted. “Can not be accepted. Ladies toilet room to be installed.”

The ladies room, installed, still exists. Due to the smallness of the tavern, it and the men’s room share a sink, located in the tavern proper. We have seen this arrangement in many bars in Milwaukee.

In 1946, the tavern building was owned by Grace Henkel, with Perfect Cleaners occupying the space to the south. That spot, part of the 1922 addition, had previously been used as a newspaper station, where the daily papers were assembled for distribution. There were dozens of such facilities in the city at that time, often occupying marginal commercial real estate spaces.

On June 20th, 1947, Milwaukee Police responded to a report of an unauthorized rooming house above the tavern. “6 women and 2 children living in 4 rooms. No rooming house license,” the complaint read.

Five days later, the police had completed their investigation. The census showed:

2 girls — which pay for board.

Not a rooming house.”

On February 1st, 1948, it was noted that the occupants would vacate the place, whatever they were doing up there.

By March, Henkel decided to open a restaurant, incorporating the space leased to the drycleaner. An arch was cut between the two buildings to join them. The police were back on April 23rd, noting there was no permit for the remodeling, but that it had been “OK’d by former Ald. Klug.”

Apparently an OK from a former council member was enough, and on September 7th, 1948, Red Bird Cafe opened in the old drycleaning space.

On what must have been a cold June 13th, 1952, a fire happened in the place. The cause: “Carelessness in operation of heating unit caused same to overheat and same to ignite contents and bldg.”

Damage: $700, which could buy you a fair amount of building, even at postwar inflationary prices.

In May, 1956, the building was owned by Clarence H. Krieser, who applied for a permit to “apply siding and precast stone to ext.”

That is the same ext. we see today. Krieser, in 1957, told the building inspector “he wants to bld. addition in rear of tavern. Tear down garage for a tavern dance hall.”

Nothing came of that, and the South Siders had to look elsewhere for their terpsichore. In 1994 Sandra Goetsch operated it as a tavern with a capacity of 80, turning it over to Mark Dorn in 2002, who named the place the “South Side Ride Pub.” It operated as such for another year before the current owners bought the building and turned it into the Palm. 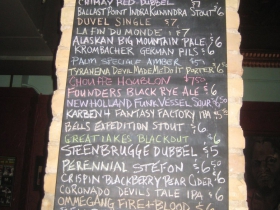 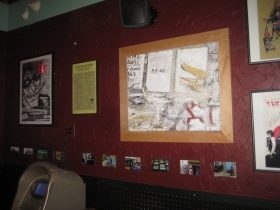 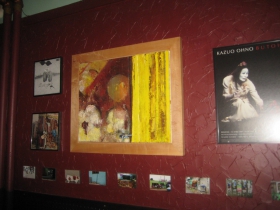 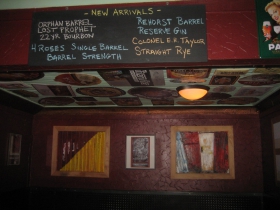 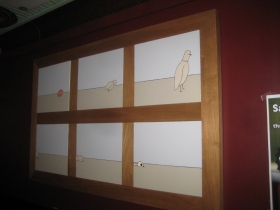 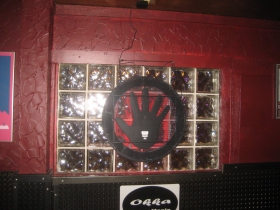