Some think the aura of “favorite son” helps in politics. It certainly helps at Oscar time and in Wisconsin media publicity for authors and designers. But there are more reasons than local boy makes good to pay attention to Neil Haven. He is one of several UW-Whitewater acting students getting attention, but the one that isn’t relying on acting. In between playing mean bar piano for a living Haven has been dashing off plays and sketches and learning his craft with determination. His playwriting shows a distinct off-center flair for comic dialogue toying with contemporary manners, mores and obsessions.

All of which encouraged In Tandem, the daring Tenth Street Theatre company operating on a shoestring at the back of Downtown’s Calvary Church, to offer the world premiere through March 22 of Haven’s Come Back. It’s advertised as a comedy but intends to build deeper resonance into its zany premise – a Route 66 style tour of crematoriums detailed in Erin’s final will. It is left to Erin’s devoted and grieving younger friend Sky to carry out Erin’s wish and decide the resting place for her ashes.

That allows manic glimpses of the nuttiest ideas in the burial industry.  But Come Back has to rise past America’s fetish for making money out of death into why, even in death, the bird-loving, free spirited, crippled Erin carries such meaning for Sky and for us.

Now that the plot explanation is out of the way, let’s come down to earth. The main reason for attending Come Back is to be able to say, sometime in the future when Haven truly masters the art of playwriting, that “we were there” during the early fumbles.

Or if you need another excuse to attend, the second act is closer to a good play — except it takes a highly uneven and staggeringly shaky hour to get there.

Why would a cast that knows better be tempted into behavior so far removed from character development, and so wrapped up in forgettable skits and posturing sitcom behavior? It turns out there is little else for the first hour – until suddenly in the crescendos there is. There are two plays here that don’t fit into one.

As the central character Sky, stuck with Erin’s urn, roadmap  and aged parrot (constantly squawking under birdcage cover), Sara Zientek only finds genuine acting chops in the second act. To ingratiate herself she leans on a bubbly personality of the kind more normally displayed  in  industrial films to sell products. That’s a curious choice because we sense a more intelligent actress underneath. But she doesn’t seem to emotionally envision the wild and crazy Erin she is always talking about — even when an affable inviting vision of Erin rolls in on wheelchair in the form of actress Tiffany Vance.

Thank heavens there is a second act for Zientek to redeem herself with the force of her defiant affirmation of Erin’s love of live and the basic right the play is really about – to choose how to live and die, and who with.

Director Jane Flieller (co-creator of In Tandem with her husband) sure tries hard, even speeding along the play’s overabundance of set changes and providing a workmanlike environment (including Rick Rasmussen’s pop-door set). The audience should be laughing and feeling long before the second act, but if Haven can’t solve the balance and the story development can’t land better witticisms, perhaps the director can distract us with well-casted vignettes.

Knowing how much of the first act relies on a ComedySportz free-for-all, she keeps Karen Estrada and Tim Higgins capably busy in sketches. Meanwhile, Vance offers a nice directness and T. Stacy Hicks tries to give a hippie edge to Mel, the comforting if overly familiar voice of friendly wisdom.

But the casting coup was finding an actress so comfortable in comedy and drama that she could turn a wicked witch-styled foil into a real protagonist.  Carrie Hitchcock plays Val, the uptight estranged mother of the departed who beneath her pinched expression and pinched heart is genuinely offended that Erin preferred friend to family blood in disposing of her ashes.

Hitchcock maintains the underlying ferocity of self-assured motherly superiority and suspicion in nasty hints that there must have been something more to Erin and Sky’s relationship. Her acting instincts allow a casual memory of Erin at a supermarket to bring her daughter alive for the audience far better than Sky does in Haven’s longer speeches – another way of adding genuine conflict to the tale.

Credit the actress and playwright for knowing there was a real play lurking in this confrontation of family tradition and defiant spirit. Theater thrives on character work over the repetitive codas of heart-tugging Haven sticks on at the end. It is those after-intermission touches of observational humanity that make theatergoers hope Haven will Come Back with something far better. 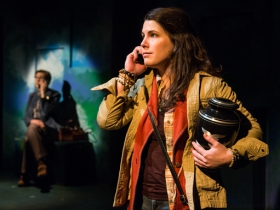 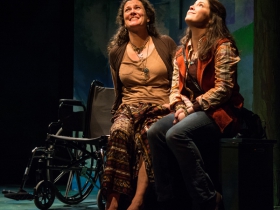 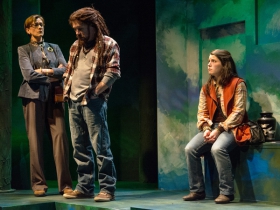