By Andrea Waxman, Milwaukee Neighborhood News Service - Jan 28th, 2015 11:58 am
Get a daily rundown of the top stories on Urban Milwaukee 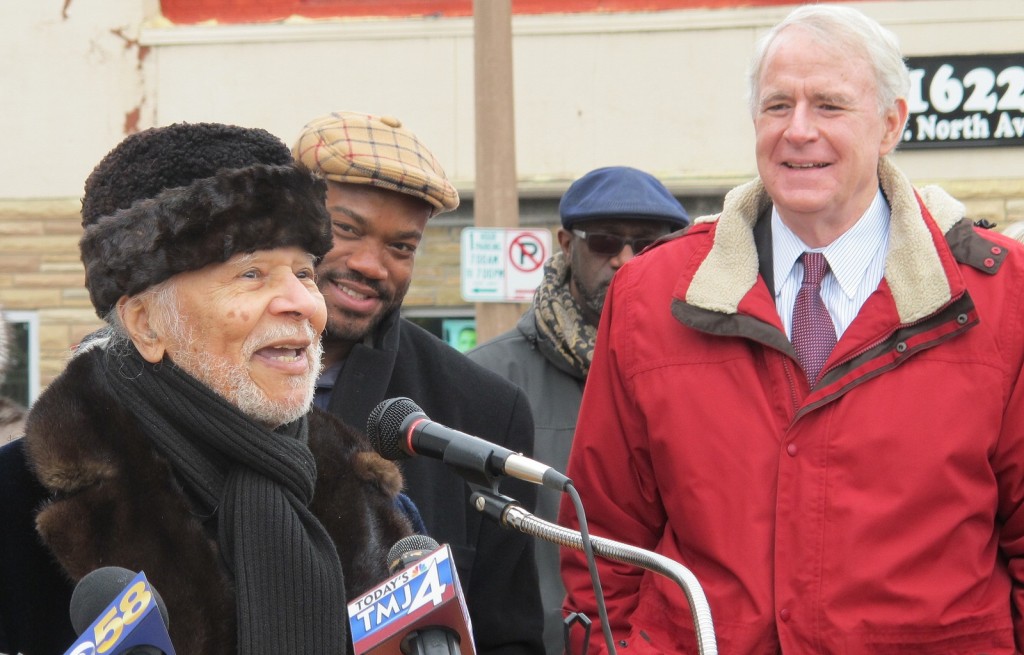 Leonard Brady, an octogenarian who was born and raised in the Lindsay Heights community, addresses the crowd as Alderman Russell Stamper and Mayor Tom Barrett look on. (Photo by Andrea Waxman)

Christal West remembers North Avenue when it was a busy commercial street where shoppers bustled in and out of Woolworth’s, Sears, Powell’s jewelry store, Galst Food Market and Jake’s Delicatessen. The architecture on the street was beautiful, she said, and she felt safe and comfortable growing up nearby.

West, 49, and her husband, Jarvis West, who now live at 21st and Meinecke, joined the crowd celebrating the recent groundbreaking for the Innovation and Wellness Commons at North Avenue and 16th Street.

They came, she said, because they volunteer at Walnut Way Conservation Corp. the lead agency for the project and they wanted to show their support.

“I think it’s going to bring back a sense of pride,” West said when asked what the Commons will mean to the community. Personally, she is looking forward to better access to healthy food. 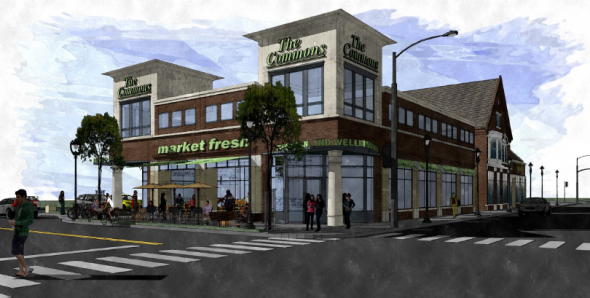 Rendering phase 1 and 2 of the Innovation and Wellness Commons.

The groundbreaking marks an important milestone for the Lindsay Heights community. When complete, a major catalytic project identified in the 2008 Lindsay Heights Quality of Life Plan will be realized.

Katherine Baker, who lives next door to Walnut Way, wasn’t sure what the commotion was about the day of the groundbreaking, but when told about the Commons she seemed pleased.

“I like Walnut Way,” she said. “They do a lot for the neighbors, especially the kids,” she added. And she hopes the Commons will uplift the neighborhood.

Sharon Adams, Walnut Way founder and director of programs, also reminisced about a better time in the neighborhood. She grew up on 17th Street, she said, “when every child who lived in this community who desired to go to college could.”

But after years of decline, Adams said, “the odds are changing again.” She told the assembled residents, supporters and dignitaries about the $6 million investment in the Commons and asserted that if she were a betting woman, she would bet on it.

“The Innovation and Wellness Commons has its roots in the commitment to health and healthy living that permeates the work of Walnut Way in particular, but also the other community groups in Lindsay Heights,” said Susan Lloyd, executive director of the Zilber Family Foundation, a major funder of revitalization projects in the neighborhood.

Lloyd noted that the community has expanded the definition of health and wellness to include not only physical, mental, psychological and spiritual health, but also economic health. 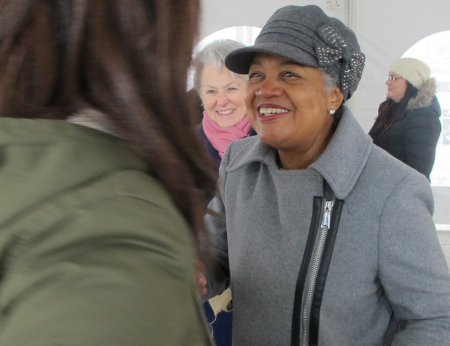 Led by Walnut Way, the community initially envisioned a Center for Neighborhood Innovation two blocks to the east, and a restaurant and culinary kitchen in the 1600 block of North Avenue. The Commons will contain both and more.

In Phase 1, Walnut Way envisions “a healthy food oasis” for Lindsay Heights and its surrounding neighborhoods. It would include food retail, production and wholesale tenants.

The 100-year-old-plus building between 16th and 17th streets on the south side of North Avenue will be renovated to house a commercial kitchen operated by Milwaukee Center for Independence, a nonprofit for people with disabilities; a juice bar, and an Outpost Natural Foods “pop-up store.” Fondy Food Center will also locate its administrative offices there. The building already has a full complement of tenants who have signed leases. The $2.2 million first phase is expected to be completed in summer 2015.

Phase 2 will consist of 9,000 square feet of new construction on a parking lot at the corner of 16th Street and North Avenue. The two-story building will be connected to the renovated building and will contain a grocery store, fitness area, employment services center, wellness services, programming for families and children and the administrative offices of Walnut Way. Phase 2 tenants are still being confirmed, according to JoAnne Sabir, associate director of Walnut Way. The organization plans to offer reiki, yoga, nia and massage therapy, Sabir said.

Unlike the other Phase 1 tenants that have five-year leases, Outpost’s lease is much shorter because the purpose of the store is to experiment and learn how a co-op can benefit the neighborhood, explained Outpost General Manager Pam Mehnert.

“We look for partners in the community who have similar missions to ours. As a co-op we’re here for our member owners, of course, but our mission is to create healthy, diverse and sustainable communities,” Mehnert said. She added that Outpost has had a relationship with Walnut Way since 2010 and gave a $30,000 grant toward a feasibility study for the Commons. 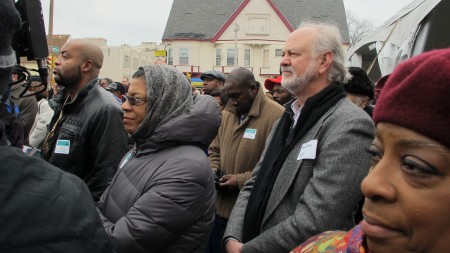 A large crowd gathers to celebrate. (Photo by Andrea Waxman)

Outpost will work with the community to understand how it can best meet food needs that are missing, Mehnert explained. “We want to fill a food niche that is not being filled there right now,” she said.

Mehnert noted that the higher cost of natural and organic foods may deter people living in poverty. But she is interested in figuring out “what can we do to make something work.” Outpost plans to conduct community meetings prior to any final decisions on the product mix.

If the pop-up works well Outpost will open a larger store in the Phase 2 building, she said.

The $6 million Commons project is being funded by grants from the federal Office of Community Services ($650,000); Zilber Family Foundation ($500,000); Wisconsin Economic Development Corp. ($400,000); and many other contributors.

Co-developer Fix Development is providing guidance on funding, financing, design, tenant recruitment, construction and property start-up for the Commons, according to the company’s Web site.

Lt. Gov. Rebecca Kleefisch, who announced the WEDC grant, said there was a lot of competition for the grant, which was awarded to the City of Milwaukee and will pass through to Walnut Way. The grant committee was impressed by the enthusiasm of the tenants that have committed to five years at the center, she added.

Much of the work to put together a project of this magnitude is invisible, noted Lloyd. “You see the planning part. You see the celebratory moments, but sometimes you miss all of what has to happen in between,” she said.

Lloyd said “(the groundbreaking is) a major milestone in a catalytic project that … will transform that entire corner of North Avenue in Lindsay Heights.”

“Large catalytic projects take a long time to get off the ground, but once they do, they have such a phenomenal impact on the community that you forget all the sweat and tears that went into making such a success,” Lloyd added. 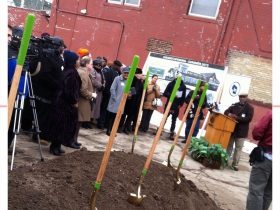 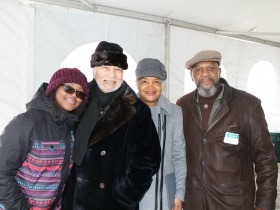 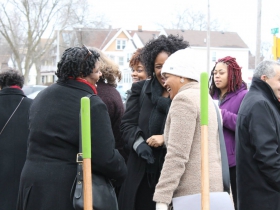 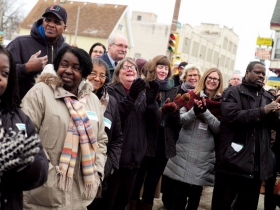 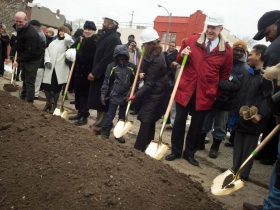 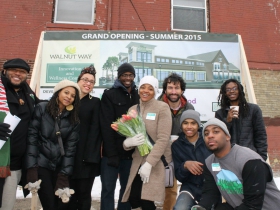