There is deliberate if gentle irony in the title Good People, David Lindsay-Abaire’s working-class, comic-drama that deserves a rush for tickets through February 15 at the Milwaukee Rep’s Quadracci Powerhouse.

Even in this workmanlike more than brilliant production, the cast conveys with solid value the play’s central theme: that “good” doesn’t mean the opposite of ethnic stereotyped thinking about blacks, Mexicans or shanty Irish. Not does being “good” rule out a willingness to dissemble, insults both given and received and desperation when the wolf is at the door.

The ending contains formidable dramatic explosions built around “good people” confronted with their own deceptions, but the journey is laced with riotous character-inspired laughter among hard-working people commonly dismissed as social lowlifes. Even the insights emerge in scathing insults and class defiance.

Margie, a veteran survivor of hard times who is raising a grown handicapped daughter, has lost her cashier’s job and turns to a former boyfriend who has escaped into rich comfort. Her truth-or-dare confrontations and her pressing for his admission of a shared past of responsibility create deep consequences.

Veteran and thoughtful director Kate Buckley orchestrates the climaxes and always knows where the cast should be – and she will time them to get there as they grow into the roles. (Most already have.) She is helped mightily by dialect coach Jill Walmsley Zager who has resisted the usual homogenization of making everyone from South Boston have the same inflections  and encourages the actors to individual tonalities that fit the “hard A” dialog and squabbling personalities. The approach frees the audience to understand the power of upbringing and delight in Lindsay-Abaire’s ear for language and humor. Kevin Depinet’s scenic locations from Bingo hall to posh suburban living room – when they don’t take too long to set up — are utilitarian and evocative.

The centerpiece is Laura Gordon as Margie, an actress of considerable technique and human observation. Her movement adeptly captures the unconscious swagger of a middle aged woman with vestiges left from her flirtatious youthful appeal, a Southie proud of her self-worth yet extremely desperate to pay the rent and survive.

Gordon at first relies more on studied understanding than full embodiment —- not quite slumming but disguising her more sophisticated tendencies. But when she finds her footing Margie becomes a mesmerizing force of fury, comedy, social embarrassment turning into social assurance and almost unintentional vindictiveness and intentional regret. It is show stopping.

Her main sparring partner, Michael Elich as Mike, starts off relying on his comfortable gifts with repartee more than full characterization, but it’s understandable since Mike is an evasive figure, concerned with glorifying and also rejecting his upbringing. But the actor relaxes into fully believable sarcasm, intellectual superiority and rage as the doctor is forced to respond to Margie’s undercutting of his pretensions.

Both are helped mightily by Jennifer Latimore as Mike’s young African American wife who brings her own airs, compromises and pain to the table with telling looks and perfectly placed interruptions.

Bernard Balbot plays young and guilt-ridden quite capably as the put-upon Steve forced to fire friend Margie. Laura T. Fisher, sounding like an angry Jean Stapleton, relishes the annoyingly mercenary landlady Dottie,  And particularly good in a role meant to steal scenes is Tami Workentin as brassy, vulgar Jean who speaks her mind (and ours) at every turn with ballsy directness.

At times this seems a world that’s half “I Love Lucy” and half A Place in the Sun, but it is all believable South Boston where scratching to survive doesn’t eliminate scratching at each other.

The author makes sure we see this is also Anywhere USA, and he is landing social points to carry throughout America. Unlike the mantra of political speeches, hard work hardly guarantees economic success. Roots remain inescapable. And while there may be distinct social classes and upward mobility, manner of speaking shouldn’t be confused with genuine manners and heart. Good People will take note. 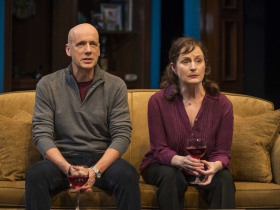 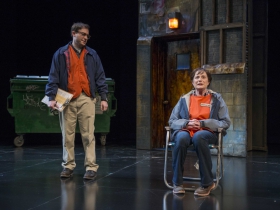 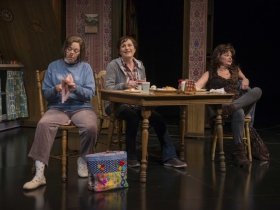 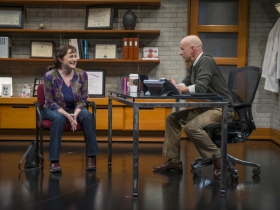 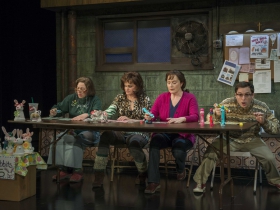 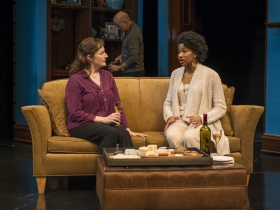