Comedian’s Riverside show was a hoot, even if he’s making all that money for the IRS.

There was a moment near the beginning of Chris Tucker’s headlining set at the Riverside Theater on Friday night where he hinted at the main reason he’s on tour. During a killer Tony Montana impression, one of about 15 Tucker did throughout the night, the Cuban drug dealer was trying to negotiate with the IRS. Adding to the humor was the personal connection to Tucker: the beloved comedian, once the highest paid actor in Hollywood, owes a lot of taxes, somewhere in the millions. Sources say Tucker settled his bill with the IRS back in September and it’s likely his current tour is helping to pay for it.

There’s nothing like the government on your ass to motivate you to make people laugh. And that’s exactly what Tucker did on Friday, the day that shares the title of his breakout 1995 film. I was skeptical of the big screen with Tucker’s face on it hanging above the stage while Terry Hodges delivered a so-so opening set. But its usefulness was revealed once Hodges exited the stage. A high-energy highlight reel of Tucker’s short but successful Hollywood career played while Edwin Starr’s “War” (Tucker and Jackie Chan’s signature song from the Rush Hour series) echoed through the theater. Afterwards the man of the hour emerged amid smoke to raucous applause, dancing for a minute before settling the crowd.

Tucker’s celebrity has waned over the years, but the Atlanta-native still gets asked for pictures pretty much anywhere he goes, which made for a solid opening bit about celebrity and cell phones. During his opener he worked in an impression of legendary actor Sidney Poitier, using it as a transition into his Hollywood material. The funniest story was about an actor he never shared screen time with, Wesley Snipes, but who has had similar, tax-related money problems. Tucker polled the audience about their interest in more Friday and Rush Hour films, but I’m not sure their opinions matter; the IRS bill will probably determine the fate of those projects.

With the Hollywood braggadocio and living in the limelight anecdotes behind him, Tucker’s set really picked up when he explored more personal, relatable aspects of his life. The biggest laugh of the night came while acting out a bedroom scenario in which your partner wants more, but you’re “doing your best.” A story about going to church as a child and defying his mother also won over the nearly sold-out crowd. He circled back to tales of fame and his friendship with Michael Jackson to close out the 80-minute set.

Unfamiliar with Tucker’s stand-up career, which dates back to early 1990s Def Comedy Jam appearances, I wasn’t sure what to expect. Back then he was known as a clean comic and when his Hollywood career petered out I heard he became ultra-religious. But the 43-year-old hasn’t lost any of his physicality and is as hilariously vulgar as his on-screen persona. Tucker also has a strong set of pipes and showed them off throughout his set, especially near the end. The final bit incorporated renditions of Anita Baker, Barry Gibb and Michael Jackson, Journey, and Frank Sinatra. It was the kind of feel good, sing-along, heartfelt performance that his mother should be proud of, kind of like going to church. Now Tucker just needs to make sure the IRS gets his collection plate. 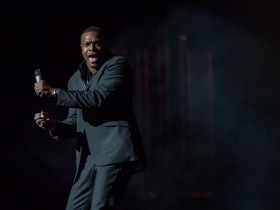 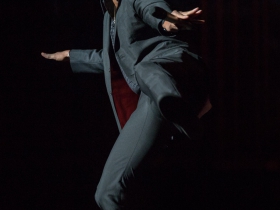 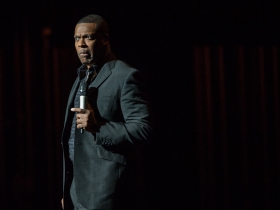 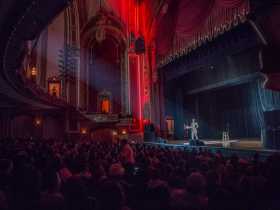 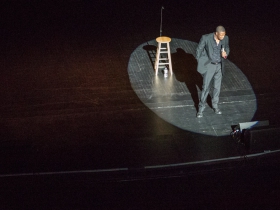 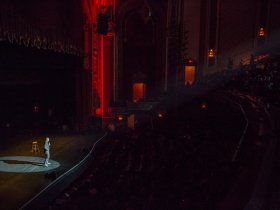