A new chocolate company is among the small businesses attracted to Lisbon Avenue.

By Molly Rippinger, Milwaukee Neighborhood News Service - Jan 24th, 2015 11:45 am
Get a daily rundown of the top stories on Urban Milwaukee 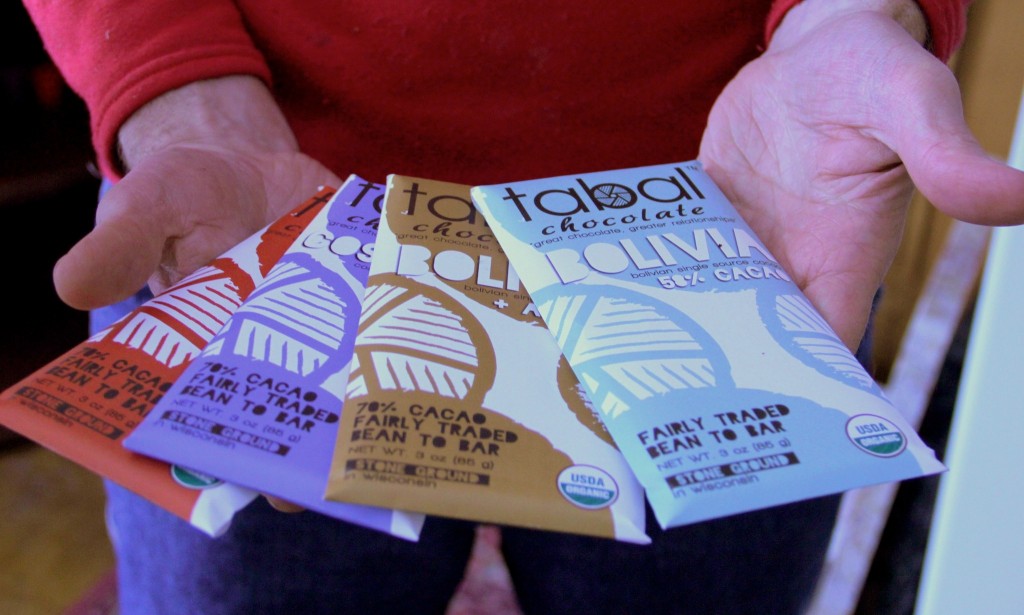 Tabal Chocolate, the only certified organic chocolate made in Wisconsin, is produced at 3329 W. Lisbon Ave. (Photo by Molly Rippinger)

Dan Bieser, founder and owner of Tabal Chocolate, is busy transforming cacao beans into beautiful bars of specialty chocolate in his workshop above Amaranth Bakery and Cafe. Humming machines churn up to 60 pounds of chocolate at a time as the intoxicating smell of chocolate wafts throughout the room.

Bieser, a high school principal turned artisan chocolate maker, is one of the more recent additions to the band of creative entrepreneurs who showcase their talents in the corridor of Lisbon Avenue between 35th and 33rd Streets. Over the past decade, artisans including bread bakers, potters, painters, poets and craftsmen have carved out their own community within Washington Park and the surrounding neighborhoods.

“It feels like we’re starting to build up this little pocket on Lisbon,” said Daisy Bouman, co-director of Express Yourself Milwaukee, a nonprofit located at 3331 W. Lisbon Ave. that focuses on providing art therapy for at-risk youth. Express Yourself, which was founded in 2003, moved into its current studio space in 2011. 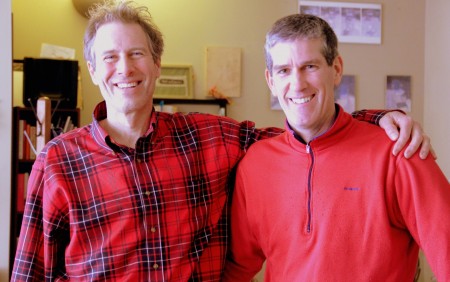 Dave Boucher (left), co-owner of Amaranth Bakery and Cafe, and Dan Bieser (right), founder and owner of Tabal Chocolate, are both located in the Washington Park area. (Photo by Molly Rippinger)

“I needed a change,” explained Bieser, who launched Tabal in 2012. “A friend of mine was going up to Toronto to learn how to make chocolate during spring break and I decided to tag along. I came back inspired and started making chocolate for my friends and family.”

In order to professionally produce chocolate, Bieser needed to work in a certified kitchen. A few friends recommended that he meet Dave Boucher, co-owner of Amaranth Bakery and Cafe, with his wife, Stephanie Shipley. “I walked in the door and have been here ever since,” said Bieser. He uses the Amaranth ovens for roasting the cacao beans, but conducts the rest of the process upstairs in rooms that have been converted into his chocolate workshop.

Boucher and Shipley opened the doors to Amaranth, at 3329 W. Lisbon Ave., in 2006. Amaranth specializes in organic artisan breads, pastries, sandwiches, soups and salads that are made with locally sourced ingredients whenever possible. The bakery and cafe is open Tuesday through Saturday from 7 a.m. to 2 p.m.

“We started as a community project to bring people together at a common meeting place,” said Boucher. “We’ve continued building collaborations, building relationships and Dan, of Tabal, is one of those.”

Tabal is the only organic chocolate produced in Wisconsin that is certified by Nature’s International Certification Services (NICS). Bieser is committed to sourcing the best ingredients from sustainable sources in countries such as Bolivia, Peru and Costa Rica. “I’ll actually Skype with the farmers,” explained Bieser. “We’re also hoping to go to Peru this summer to learn more about where the cacao is grown.”

Bieser purchases the cacao beans directly from the farmers. Once they arrive in Milwaukee he begins the multi-day process that transforms the beans into bars of chocolate.

Tabal distributes to approximately 40 stores across the Milwaukee area. “We’re trying to slowly branch into Madison,” explained Bieser. “I’m excited about the growth.”

Bieser estimated that he has produced approximately 10,000 chocolate bars in the past year and he hopes to double production in the year to come. The 3-ounce bars are available in nearly a dozen different varieties, such as Costa Rican 70% cacao with sea salt or Bolivian 70% cacao with almonds. Tabal also sells Bolivian cacao nibs, 1-ounce chocolate bars, chocolate-dipped organic Oreo cookies and cacao nib clusters.

Bieser’s products have been available at Outpost Natural Food, a locally owned cooperative grocery store with four locations throughout greater Milwaukee, since May 2013. “Our customers appreciate Dan’s process and the high quality product it yields,” explained Zack Hepner, local purchasing specialist for Outpost. “It means a lot to our customers that he is based here in Milwaukee and has invested so much in a neighborhood.”

In Mayan, the word tabal means “relationship,” and it represents the connection Bieser has established not only between himself and the farmers who grow the cacao, but also with the local community.

“We’ve found this wealth of resources within the neighborhood,” said Bouman, who is also the graphic artist for Tabal and designed the company’s new packaging. “The dedication Dave and Dan have to the community is incredible.”

“There’s so much to say about Amaranth and what they have done for the community,” said Bess Earl, sustainable communities coordinator at Washington Park Partners, a collaboration of neighborhood organizations, businesses and residents. “Hopefully people in Milwaukee will soon identify Lisbon Ave. as a place where artists gather.”

One thought on “Avenue of Entrepreneurs”