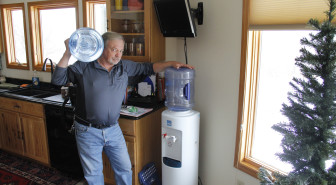 Frank Michna buys bottled water for drinking and cooking in his Caledonia home because of high levels of molybdenum and boron in his well. Photo by Cole Monka / Wisconsin Center for Investigative Journalism.

Before coal ash was regulated in Wisconsin, utilities legally dumped tons of the material in empty lots, waterways, landfills and other places.

Most of Madison’s Isthmus, between Lake Mendota and Lake Monona, is built upon coal ash from the Madison Gas & Electric Blount Street plant and other sources, such as Oscar Mayer. Ash lies under many parks and athletic fields and even beneath a St. Mary’s Hospital parking lot that was once a dump.

Though no molybdenum has been found in city wells, the metal chromium-6, also found in coal ash, has been discovered at low levels. Utility officials believe the metal is naturally occurring and not from ash.

Most of what was reused went into concrete and asphalt, which does not leach as easily into groundwater. The remaining 21,000 tons went toward mine reclamation, fill, soil stabilization and other uses.

About 17 percent of all the coal ash produced by the company in both Iowa and Wisconsin goes into landfills or coal ash ponds where the ash is stored as a sludge or slurry, Reigstad said.

The EPA has documented failures in coal ash storage, including the 140,000-ton February coal ash spill into North Carolina’s Dan River from an impoundment owned by Duke Energies.

Steve Jackson, Alliant’s manager for environmental services and planning, said the pond was cleaned up and capped, and no pollution problems have been reported since.

Alliant’s two active Wisconsin landfills, one at the Edgewater plant near Sheboygan and the other at the Columbia plant near Portage, have liners and leachate collection systems. He added, however, that an older section of the Sheboygan pond remains unlined. He said groundwater monitoring near the landfills has not detected molybdenum at levels exceeding health standards.

Michna, whose contaminated well is not far from the We Energies Oak Creek plant, is wary of coal ash storage areas. He remembers the day in 2011 when 25,000 tons of ash collapsed from the company’s massive storage site on the shore of Lake Michigan. The company had filled a ravine with coal ash in the 1950s, before state regulations were passed. 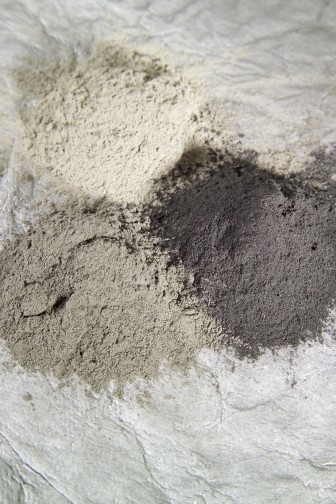 Despite the DNR’s critiques of the Clean Wisconsin report, Coakley said the agency would be especially interested in learning more about the connection of coal ash to molybdenum contamination.  The issue, she said, is not likely to go away.

She added, however, that it is unlikely the agency will conduct those studies on its own because of its tight budget. The DNR is instead interested in collaborating with a research institution that can take the lead on such studies, Coakley added.

But Michna said it is beyond the time for studies.

Michna thought he was safe from contaminants after he sank a new 300-foot well in 2007 at his Racine County home. But several years later, he and his family started suffering from mysterious illnesses.

“My health went down and I got gout,” Michna said. “I had gout and I could hardly walk. I got special insoles.”

Michna also said he experienced gastrointestinal problems, which he believes may be connected to the boron in his water.

Boron showed up at 1,850 parts per billion, above the state enforcement standard of 1,000.

Molybdenum appeared at 27 ppb, below the state standard of 40.

Now, the Michnas buy five bottles of water a month for their drinking water. They installed a $3,000 filtered water softener.

Ron Seely and Kate Golden are reporters for the Wisconsin Center for Investigative Journalism. Rachael Lallensack, Cole Monka and Daniel McKay are enrolled in one of eight journalism classes participating in The Confluence, a collaborative project involving the Center and UW-Madison School of Journalism and Mass Communication. The nonprofit Center (www.WisconsinWatch.org) collaborates with Wisconsin Public Radio, Wisconsin Public Television, other news media and the journalism school. All works created, published, posted or disseminated by the Center do not necessarily reflect the views or opinions of UW-Madison or any of its affiliates.