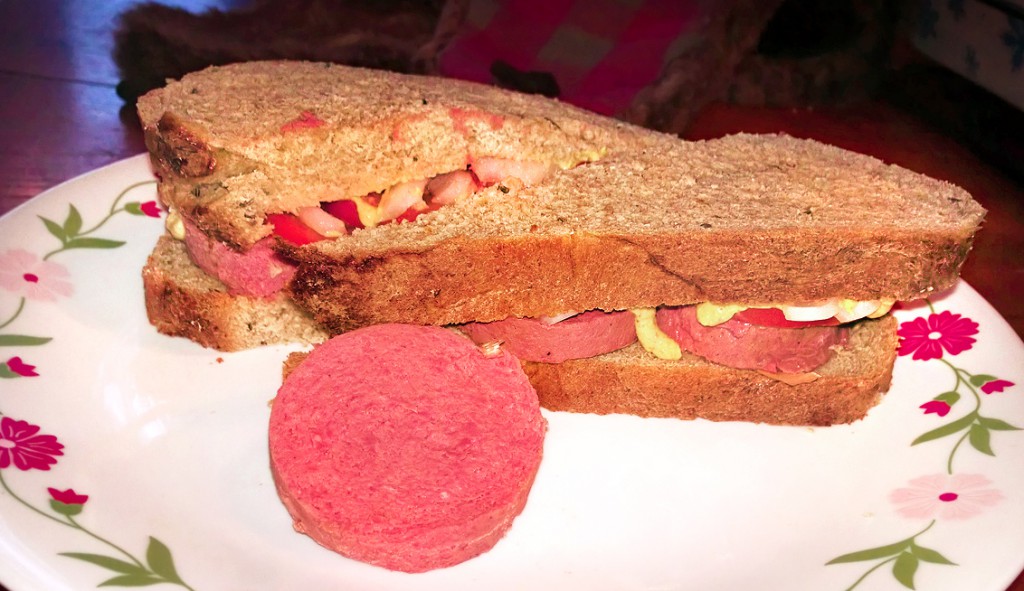 Your first question  — if you have no German heritage and the deeply Milwaukee comfort food has not seeped into your marrow — might be this:  “what is Braunschweiger?” Simply put, it is a finely minced pork meat and pork liver concoction seasoned with onion and spices and then squeezed into a tube before poaching it until cooked. Braunschweiger should be pinkish and sliceable, but can have shades of tan or gray. Most people eat it cold like lunchmeat.

Your second question is the one asked most often: “what is the difference between Braunschweiger and Liverwurst?” The easiest answer is that our version, Braunschweiger, is smoked and contains more pork than pork liver. Liverwurst is foremost pork liver and is made more spreadable by using non-fat dry milk or potato starch. This gets confusing as often both products have nearly the same ingredients, both can be made spreadable and both get labeled interchangeably. The most confusing title may be Usinger’s brand which calls it “Braunschweiger (Liver Sausage)”. By definition, it is part of the liverwurst or pate family.

Your third question—the one asked after being offered a slice—is “why would I eat that?” This one quickly puts people on two sides of a gustatory fence. Either you love it or the idea of it is somehow unpalatable. Usually on the pro-side are those who were introduced to it as a child, or have a ravenous appetite at football parties, or enjoy the taste of diving into something savory and mysterious to the palate and realize the vitamin-rich value. It is also gluten free.

I have the right DNA palate for such a food as Braunschweiger as I come from German, Norwegian, French and Irish ancestors. I enjoy it infrequently (usually on holidays) and I’m always looking to heighten traditional Wisconsin foods or recipes. 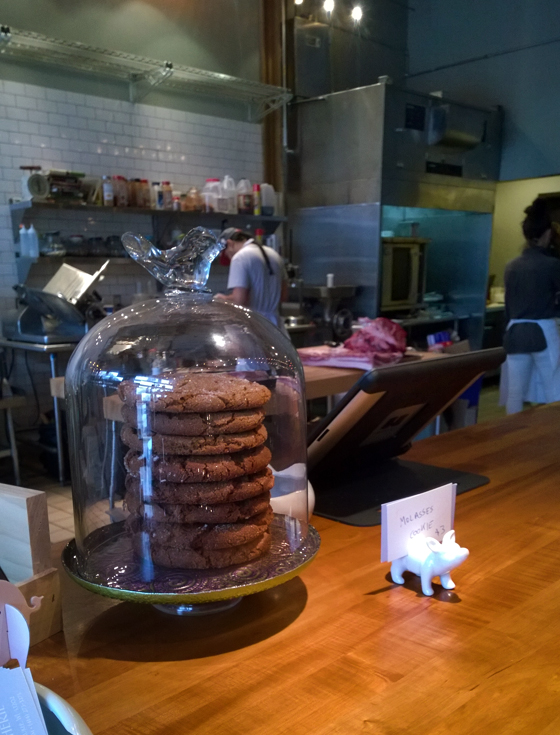 I consulted with butcher/owner of Bavette La Boucherie Karen Bell for this story. On the counter this particular morning in her Third Ward shop were giant slabs of meat awaiting finer cuts while little silver and porcelain pigs dotted the countertops. Clearly I was in the right place.  Her memories of Braunschweiger were mostly from visiting her Grandmother in Michigan, who had a German lineage and ate it all the time.

That being said, the item is not on the prolific menu here. There are many fine Italian, Spanish and French influences listed with many of the sausages , salami and fresh cuts of beef, pork and lamb coming from Wisconsin makers like Madison’s Underground, Black Earth Meats, and Salas Farm in Burnett. The closest comparable and occasional offering at Bavette is a Pâté Grand Mere (“Grandma’s Terrine”) which is made with pork shoulder, thyme, cognac and employs a panade (a thick mixture acting as a binder, which is sometimes chicken liver).

The French also have a version called Pâté de Campagne (“Country Terrine”), which sounds romantic and you would probably eat that. The Italian sausage version is called Mazzafegati (“Pork’s Liver Sausage”). None of these names, however, are as fun to say as “BRAUNSCHWEIGER!” (in a thick German accent.)

The sausage, by the way, did not actually originate in Braunschweig, Germany. True, it is named after the charcutier’s (in the more known French that means “pork butcher,” in German the equally skilled delikatessen artist is a “metzger”) product from the Lower Saxony region.  The city’s name loosely translates to “Bruno’s Village” and was also known as Brunswick.

The origin of the Braunschweiger meat is America is by way of German immigrants who borrowed the base idea from the home country’s renowned “Mettwurst” sausage recipe. In the Midwest, the soft luncheon meat finds niche love in various locales but the closest sister city to Milwaukee that shares such rabid affection and history with it would be Pittsburgh.  That city still offers it on a few lunch menus, whereas it is not featured on any of the local (German or otherwise) restaurant menus I could find. Madison’s Tipsy Cow has a special ‘Wisconsin Bánh Mì’ sandwich featuring Usinger’s braunschweiger, however, which I simply must try.

In most Milwaukee metro chain grocery stores, Braunschweiger is available in one or two brand choice hidden on the bottom shelves near the bacon, bratwurst and bologna. People find it by accident or buy it for their senior relative. Most offerings come in a bright yellow fibrous tube and contain a fair amount of sodium-type preservatives that lets it keep for awhile. Fresh or homemade versions last less than a week.

I was recommended to seek out Kemen Braunschweiger and found retailers listed on the home website of its parent company Silver Creek Specialty Meats out of Oshkosh, Wisconsin. There were no locations in Milwaukee but there were several southeastern Wisconsin vendors including two in Burlington. 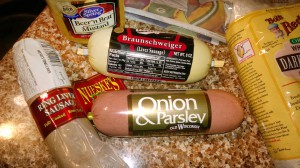 Gooseberries was closed by the time I got there so I traveled across town to Richter’s Marketplace. This was formerly a Sentry store, and since the recent changeover they stopped carrying that brand in favor of Lake Geneva Country Meats. That brand only had a large, straight up package of liver sausage available, but right next to it were TEN more choices for Braunschweiger.

This is how I came to stand around in a very lonely grocery store on a Monday night (the Packers were on), examining the tiny print of ingredients on tubes of Braunschweiger while listening to soft Christmas carols and considering my life choices.

I picked up Usinger’s (Milwaukee) product which I am familiar with as well as Old Wisconsin (Sheboygan) Onion and Parsley spreadable version and Neuske’s (Wittenberg) Smoked Liver Sausage. This last option loses points for not calling it Braunschweiger even though it has the right ingredient order, but gains points for including pork hearts and pork stock with spices aplenty. Other artisanal versions came from Kentucky and Ohio and faithfully included bacon ends in the mix.

I could have also picked up Cher-Make’s (Manitowoc) version, but I was saving the rest of my budget for some sweet Vidalia onions, perky on-the-vine tomatoes and Silver Spring’s (Eau Claire) horseradish mustard. Again, picking a Wisconsin-made mustard is a long, drawn out choice as I had five to choose from but theirs won some kind of award which is good enough for me.

As you have guessed, I am making a sandwich and this means rye bread.  I found marble rye in the grocery store and could have picked one up from Miller Bakery on another day, but when I Googled “Milwaukee Rye Bread” on my smartphone thinking I would find a ubiquitous German bakeries in Milwaukee that features it. I sadly found little in that direction, but immediately marveled at where the journey would take me next. 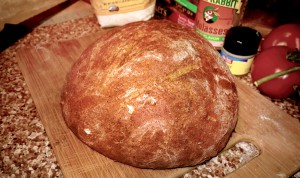 There is an old and storied recipe called “Old Milwaukee Rye Bread”.  A whole separate article on this recipe’s once popular country-wide fame could be written on its history.  Often, this particular bread is called out for extraordinary flavor and texture. Even the revered bread chef Bernard Clayton, Jr. was often quoted that this recipe was his favorite bread.

The key process to Old Milwaukee Rye Bread is to make a “sour sponge” that takes up to three days to ferment. This mixture of rye flour (which is very different from wheat flour), yeast and caraway seeds combines eventually with a normal breadmaking process to give it a different flavor from the rye bread you may be used to having with a Friday night fish fry.

I know all this because I went home and created two loaves following a 1969 Milwaukee Journal clipping found on the MPL website. Many other recipe sites pretty much crib directly from this original and then add touches on to it. If they suggest coffee and chocolate in addition to molasses, you are just making pumpernickel at that point and not rye bread.

Making it was a lot of trouble and the bread was not as dark and sour as I hoped, but what a welcome reward that overall sandwich would be. The smells coming from my lunch sack on Wednesday could not be denied.

Karen Bell suggests pairing such a sandwich with a cider or apple wine, maybe an off-white or Riesling.  If choosing beer, try a fruity affair such as New Glarus Serendipity. I also added “bread and butter” pickles and some kettle-cooked potato chips to my plate.  Full of Vitamin A and protein, I was ready to tackle the second half of the day.