By Andrea Waxman, Milwaukee Neighborhood News Service - Dec 8th, 2014 06:41 am
Get a daily rundown of the top stories on Urban Milwaukee 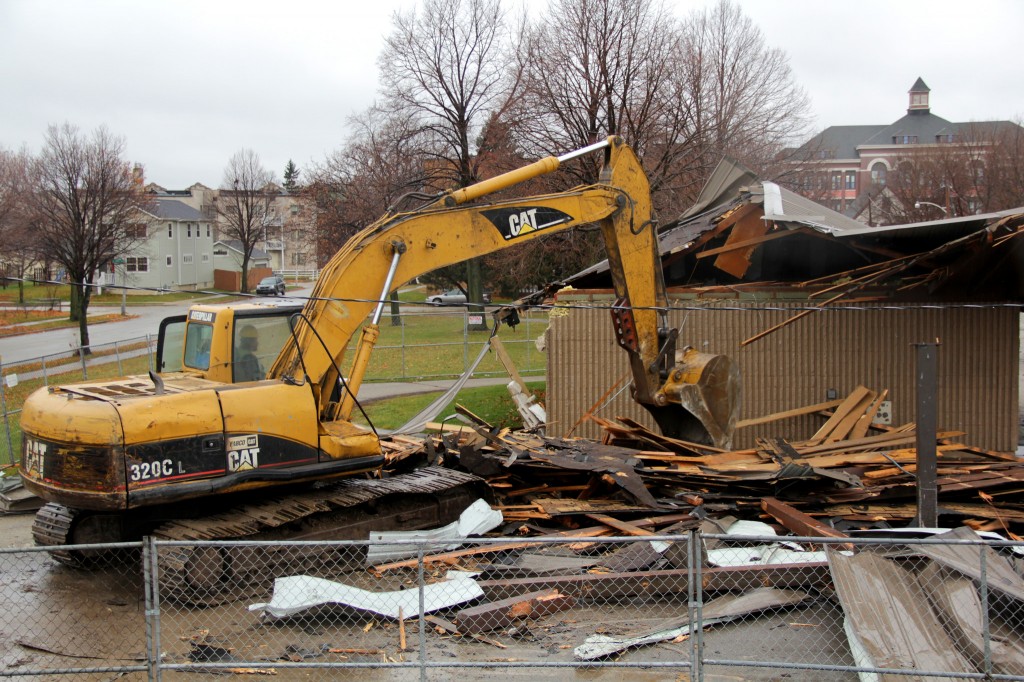 A backhoe driver demolishes the Johnsons Park pavilion to make way for a new restroom building and other improvements next spring and summer. (Photo by Molly Rippinger)

By the end of next summer, visitors to Johnsons Park in Lindsay Heights will see a number of improvements. Last week, Milwaukee County Parks initiated the final phase of the Johnsons Park Initiative when it demolished an enclosed pavilion near Brown and 18th streets in the southeast part of the park.

“There’s a lot of good stuff coming in the spring when the groundbreaking happens, but to get this pavilion demolished and cleared out of the way now … means the county gets a jump on (constructing) the new facilities,” said Marcia Caton Campbell, executive director of the Center for Resilient Cities.

During the summer, the county will build a new open-air picnic shelter east of the playground and a new restroom block on the site of the old park pavilion. The Center for Resilient Cities will add a new performance stage, energy-efficient lighting, pathways, a bioswale for storm-water management and about 50 trees. It will also renovate a T-ball field and a larger sports practice field for youth teams, Campbell said.

The Center for Resilient Cities, Milwaukee County Parks and Rotary Club of Milwaukee are partners in the initiative. 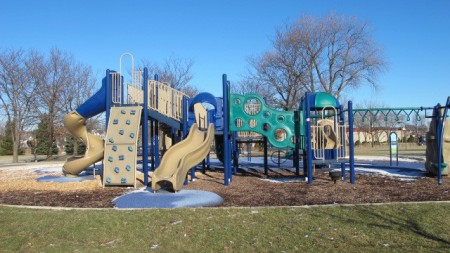 Several new playground structures were added in Johnsons Park in an earlier phase of the reconstruction initiative. (Photo by Andrea Waxman)

Horace Tucker II, who has lived in the area for seven years, said the park is important for the neighborhood kids “to give them something to do and hopefully keep them safe.” Though he doesn’t use the park himself, Tucker said he welcomes all investments in the central city.

Miller Brown, who doesn’t live in the Johnsons Park neighborhood but uses the park, belongs to a men’s group that mentors boys and young men. In summer, “to keep them busy and out of trouble” his group sponsors games and speakers at Johnsons Park. Brown said he would like to see a new baseball diamond at the park some day.

Lindsay Heights residents Janet Williams, Schynitha Mills and Elnora Buckner said their children and grandchildren play in the park. Though they said they would like to see more outdoor grills, they were pleased to hear about the expanded picnic shelter that is planned.

Nora Golden, who lives near 14th and Brown streets, said she will appreciate the open-air shelter after having been robbed in the former enclosed pavilion.

Gradual improvements have been made to the park over the last five years. The idea for rehabilitating and reconstructing Johnsons Park was born around 2005, according to Jeff Rainwater, Milwaukee project director for the Center for Resilient Cities, who designed the plan. The center sought community input and the county developed and approved a concept plan.

“Then nothing really happened until 2009 when Milwaukee County and the City of Milwaukee partnered to remove some large earthen berms” that surrounded the park and obscured visibility within it and from the outside, Rainwater said.

Since then, the city and county have made other improvements including reconstructing the playground and adding swings. In 2010, as part of the Johnsons Park Initiative, the Center for Resilient Cities constructed a Nature Explore Outdoor Classroom at Brown Street Academy and redesigned Alice’s Garden, a two-acre urban farm that is part of Johnsons Park.

In addition, the center remediated the soil, enhanced drainage and added a pavilion, tool sheds, benches, picnic tables and grills. In partnership with Lake Park Lutheran Church, it also designed and installed a labyrinth that nurtures spiritual health and promotes cultural healing, according to the center’s Web site.

In 2011 and 2012, the Center for Resilient Cities renovated the Brown Street Academy schoolyard.

Rainwater said the construction budget for the initiative’s final phase, including some maintenance funds, is $1.23 million. In addition, the county has invested about $800,000. The overall cost of the initiative is $3.2 million, according to Mary McCormick, Rotary Club of Milwaukee executive director.

Based on the age and condition of the pavilion and restroom, Johnsons Park is “next in line” for capital improvements, said John Dargle, Milwaukee County Parks director.

While many community organizations have contributed to the project, the Rotary Club of Milwaukee played a critical role as the major fundraiser, Campbell said.

Rotary helped raise funds for the improvements to Brown Street Academy, and when the group decided to play a similar role in completing the Johnsons Park improvements, “we really achieved liftoff,” she added.