The Rep’s Christmas Carol is one of three new holiday shows.

A scene from Milwaukee Repertory Theater’s 2013/14 production of A Christmas Carol. Photo by Michael Brosilow.

Despite the numerous adaptations and retellings of A Christmas Carol, the story at its core never seems to lose its relevance or intrigue. References to the Charles Dickens novella seep into pop culture just as surely as the ghosts of Christmases past, present and future creep into Scrooge’s bedroom.

For Brian Mani, A Christmas Carol never grows old because it’s not really a story about Christmas. It’s a story about love, a reminder of how important it is to love others.

“I think it’s something we can forget about (because we) get obsessed with our own lives,” he says. “Obviously, there are people out there like Scrooge … but it’s good to hear this story and understand what it’s all about is the people we’re with.”

Mani plays Mr. Fezziwig in The Milwaukee Rep’s production, opening Dec. 2. Though he has been acting professionally for over 25 years, this is only his second time in A Christmas Carol. The previous performance was with the Rep in 2007, when he played Mr. Fezziwig and the Ghost of Christmas Present. The content of the show hasn’t changed much since then, but audiences may take away something different this year.

Director Aaron Posner takes pride in keeping the production as relevant to today as possible. He identifies specific scenes that can be emphasized in ways different even from last year’s performance, just so the audience can see the true lessons behind the text.

Mani recalls a scene from Scrooge’s youth where a young Jacob Marley offers to buy Fezziwig’s company for a large sum. Fezziwig turns down the offer, reasoning that he built up his business not just for the money but “to preserve a way of life that one knows and loves.” Mani approached the scene as Fezziwig trying to teach Marley an important lesson. Posner had other ideas.

“When Aaron was listening to (the dialogue), he looked at me and said, ‘I don’t think Fezziwig has a bone in his body that would try to convince Jacob Marley to change his mind,’” Mani says.

Once Posner explained Fezziwig’s main concern was preserving a way of life for his family, Mani took on his character’s personality in a different light. He started focusing on his simplicity and good heart rather than forcing a life lesson out of him.

Capturing the essence of each character doesn’t just help the individual actors; it creates a more genuine cohesion within the show.Theatergoers tend to focus mainly on the familiar, principal characters—like Jonathan Smoots, making his debut as Scrooge after numerous other roles in the production—but the show is only as good as the cooperation and collaboration between the cast.

“Scrooge learns his lesson because of the company that tells that story with him.”

Those lessons can be applied to more than just the characters. Tiny Tim’s illness and the Cratchits’ poverty may just be plot devices onstage, but they represent very real suffering happening on a global scale. The actors are reminded of it every day in rehearsal and hope they can make their audience aware of the same thing through their performances.

“You know that that’s going on in Milwaukee and all across this country and this world. There are people who have to make sacrifices that they don’t necessarily choose to, but have to. It’s hard to not be touched by it.” 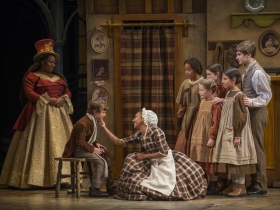 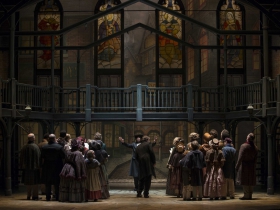 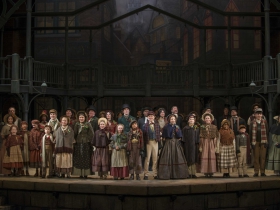 Thomas Mazza as Hermey the Elf and Darius Gaskin as Rudolph, 2012. Photo by Mark Frohna.

Christmas is slowly but surely making its way into Milwaukee. Chestnuts are roasting on an open fire, residents are slowly turning into Eskimos, and Rudolph the Red-Nosed Reindeer is back onstage to guide Santa’s sleigh.

Director Matt Daniels was part of this show’s debut two years ago and feels a nostalgic connection to the Christmas classic.

“I love how something can make me laugh with how ingenious it is and then the next minute just break your heart a little bit,” he says.

First Stage’s 2012 show was the first stage adaptation of the beloved TV special, with arrangements and orchestrations by music director Timothy Splain. And it really is a close adaptation. All of the original characters—with age appropriate casting for young characters like Rudolph, Clarice, Hermey the Elf and others—are featured. Most of the dialogue is intact. Production designer Brandon Kirkham looked to the claymation scenery for inspiration, though the actors are more lively than “stop-motion little fuzz balls.”

This season’s rendition includes a few changes in dialogue and staging (subtle, but “enough to make you a little crazy” according to Daniels) but the key difference is its new song, “Merry, Merry Christmas To You” by Johnny Marks. It was played on TV as underscoring, but First Stage obtained the lyrics to add it to the show.

Christmastown is brought to life by the use of kokens, onstage stage hands found in Japanese theater. They’re traditionally dressed in black and help manipulate puppets, change scenery and in this case, help reindeer fly.

“We have a lot of young performers who are also kokens,” Daniels says, “but because our play takes place in the North Pole and our set is all white, we have them dressed in white so we’re calling them ‘snowkens’ instead.”

Character Arts, which holds the rights to Rudolph, monitors the show to make sure anything done with its property is true to spirit of the original material. For Daniels the trick is honor the original while finding the company’s own take on it.

“We have an obligation to figure out where those two things meet and find how to inject the sort of whimsy and quirkiness of that incredibly beloved special into what we’re doing,” he says.

Can’t get enough entertainment from Skylight Music Theatre? Join Mike “Ding” Lorenz, Ray Jivoff, and Jack Forbes Wilson after every Friday and Saturday evening performance of The Wizard of Oz for a percussion cabaret. All shows are held in the bar immediately following the main stage show.

Opens Nov. 28 and runs through Jan. 3 at Skylight Music Theatre. Admission is free.