The intersection of Water and Mason streets was once Market Square, the civic and commercial heart of the city. 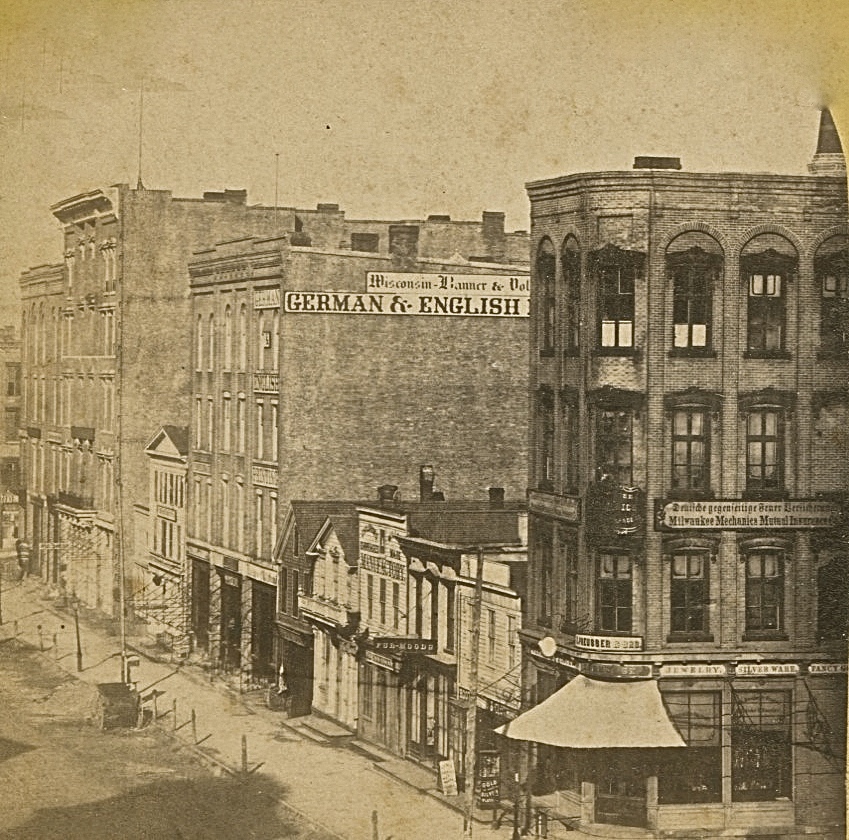 The earliest buildings in Milwaukee tended to be simple wood-frame structures designed in the federal style. But as the city grew, buildings in the downtown area would be replaced by taller brick ones. This city view dating from the latter half of the 1860s shows this transition in progress. This view is of the northeast corner of the intersection of Mason St. and E. Water St. (now simple Water St.). This also was considered the east side of Market Square. Note the smaller two- and three-story buildings wedged in between their newer brick counterparts.

Market Square was located just south of City Hall which was a much smaller building in those days. That City Hall was originally built as a market building hence the name of the adjoining square. Two signs are prominent in this photograph:  “Milwaukee Mechanics Mutual Insurance Co.” and the “Milwaukee Banner and Volksfreund.” The latter is by far the more interesting. The Banner was Milwaukee’s first German-language newspaper founded by immigrant Moritz Schoeffler in 1844, at a time when the city’s German-born population was quite small. The paper would be published until 1880 when it was consolidated with the competing Freie Press.

In 1990, a report by the Historic Preservation Commission noted that Market Square was “once the civic and commercial heart of the city.”  But that hasn’t been been true for more than a century. Today this entire block is occupied by the BMO/Harris Bank, formerly the Marshall & Ilsley Bank. Market Square today is largely a memory, a casualty of the widening of Water and Wells streets.