Milwaukee education and job training center serves 240 young people; 87% get a job or enroll in college or military. 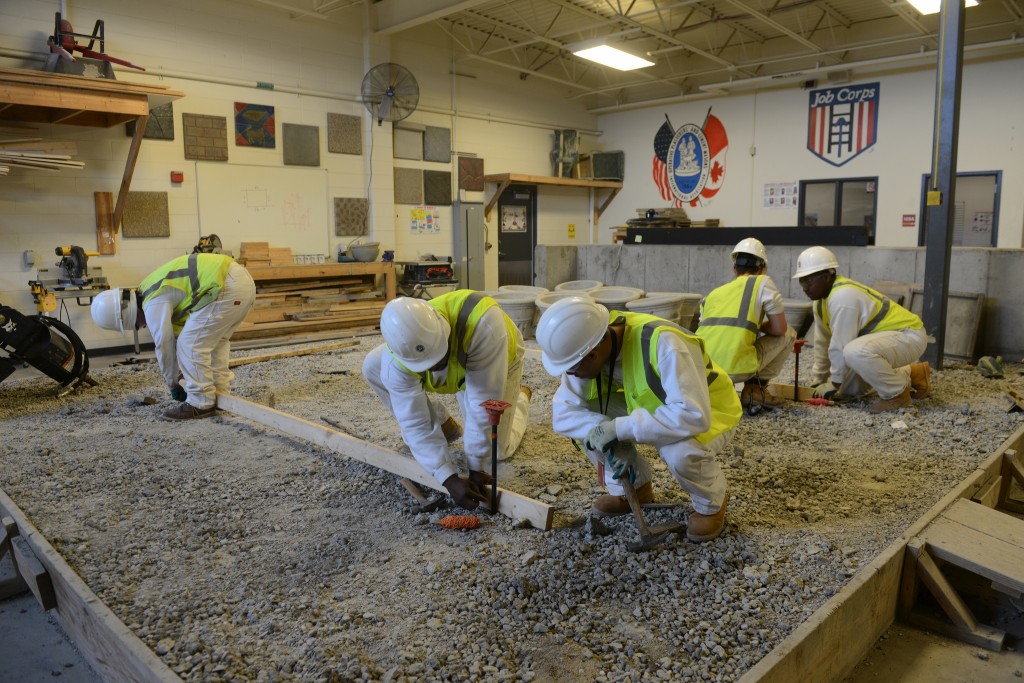 Milwaukee Job Corps students work together during an exercise in a construction trade class. (Photo by Sue Vliet)

Maikou Xiong begins and ends each day the same way, caring for the homebound sick and elderly.

Between the hour-long visits with her patients at the break of dawn and late into the evening, the personal care worker goes to school full time, manages a student store and serves as the vice president of her student government association.

“It’s a lot of work and that’s just reality,” she said.

The 24-year-old daughter of Hmong immigrants from Thailand is a student at Job Corps, a U.S. Department of Labor career-training program that was created as part of Lyndon B. Johnson’s War on Poverty 50 years ago.

Xiong is in her last year of the program, which is geared toward economically disadvantaged youth and young adults between the ages of 16 to 24. She has been studying to become a certified nursing assistant for a year and a half.

Part of her motivation to endure the grueling days and to become a nurse is to be able to financially help her impoverished family, including her disabled mother and her father, who supports Xiong and her six siblings with his job as a maintenance worker.

“My parents didn’t go to school, so it’s a big deal that I have the opportunity to go to school,” she said. “That motivates me to better myself.” 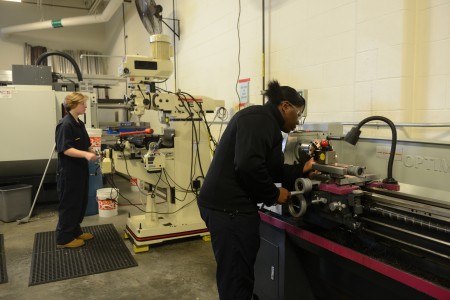 Students get hands-on training in a Job Corps class. (Photo by Sue Vliet)

Each weekday, Xiong heads to the Milwaukee Job Corps campus, located at 6665 N. 60th St., past fences securing the perimeter and through a gated entryway. Once inside, she joins about 240 students who participate in academic classes, hands-on technical training and personal development courses. Many students also live in dorms and enjoy sports and social activities on the bustling campus.

“Our overall goal is to assist young adults to be more marketable, more employable and to have a sustainable income,” said James Roberts, director of the program in Milwaukee.

Some Job Corps students earn their high school diplomas while in the program. Many take advantage of vocational training in the manufacturing, construction and health care trades. The training that is offered is focused on industries where jobs are in high supply, Roberts said.

“Our goal is to make sure that the training we provide is relevant,” Roberts said. “It’s hands-on. We are trying to give our students exposure [to] the real-world environment.”

After completing the program, 87 percent of the students enroll in college, find a job or enter the military, said Roberts. In addition, Job Corps increases attainment in higher education, reduces criminal activity and increases short-term earnings, according to a 2008 study published in the American Economic Review.

Although the study found “the program has promise,” it also determined only the oldest participants sustained earnings gains over the long term. However, Job Corps is the only federal training program that has been shown to increase earnings for this population, the study abstract said.

“You can’t say the program doesn’t work, because it has worked for some,” said Carolyn Heinrich, a former director of the La Follette School of Public Affairs at the University of Wisconsin-Madison, where she focused on social welfare policy and labor force development.

“But, there are a lot of things right now, especially in our current labor market, which have been hindering the employment of teenagers. There’s a lack of demand.”

Since about 2000, the labor market for economically disadvantaged teenagers and young adults has been extremely soft, according to Heinrich. “More and more they are not in an educational program and not in the labor force,” she said. “We don’t know what they are doing, but they are not entering the job market.”

One of the problems young people in Milwaukee face is that so many jobs — not just those in the fast-food industry — are low paying. A fair number of manufacturing jobs in the city also begin at low wages, Heinrich said.

“No one has been treating this in a policy context like the crisis that it really is,” Heinrich said. “The crisis is that we know from many years of research that if young people don’t get a toehold in the labor market by their early to mid 20s, they probably never will.”

A range of ideas have promise in better preparing disadvantaged youth so they can meet the demands of the job market, according to Heinrich. One is to provide training earlier, such as in high school, in skills that are in demand. Another idea is to focus more on employer-led training such as apprenticeships, so that employers have a direct hand in building tomorrow’s workforce, according to a policy brief Heinrich authored.

Building human capital has been a priority for Milwaukee Mayor Tom Barrett since he was a U.S. congressman in the 1990s, when he was instrumental in bringing the program to Milwaukee. The city was granted a Job Corps site in 2003, seven years before the 25-acre campus opened in 2010.

“We need to put a lot of emphasis on people having skills for specific jobs and not generic jobs,” said Barrett, who called bringing the program to Milwaukee his “17-year overnight success.”

Barrett said he sees a lot of value in programs that offer transitional, summer and apprenticeship job opportunities to teenagers and young adults in the city, where a third of people 16- to 24- years old live under the federal poverty line.

“There are enough people sadly that need jobs that can be plugged into” these type of opportunities, he said.