Building which once housed Northwestern Coffee Mills will be renovated to include 15 urban apartments and two retail spaces. 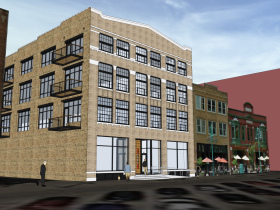 Fifteen apartments and two retail spaces are planned for a 1904-era building at 211 N. Broadway in the Historic Third Ward, it was announced Wednesday.

The historic district’s Architectural Review Board gave preliminary approval to plans by Engberg Anderson for the renovation of the now-vacant structure that most recently housed Hot*Pop and Showcase Awards on the first floor. Both have since moved to other Third Ward locations.

Eric Ponto, a designer with Engberg, said the firm’s plans include restoring the retail facade to its original glassy state, replacing existing wood sash windows with modern, operable counterparts, adding windows and projecting balconies to the south and west walls of the structure, creating 15 parking spaces in the basement and incorporating an accessibility ramp on the street side.

The biggest challenges, he said, were the wheelchair ramp and the need for an apartment building entrance to be incorporated alongside the two existing retail entrances.

The building was bought in 2009 by Hot*Pop owner Margaret Martin for $900,000. Martin is a native Milwaukeean, and daughter of Deborah Kern, who founded the Garden Room [Now Mod Gen] in Shorewood in 2001, where Martin got her initial exposure to the retail business.

Martin is also the granddaughter of  Dr. Robert Kern, a major benefactor of MSOE, and the head of the Kern Family Foundation, Wisconsin’s second-largest. [See: Urban Milwaukee: The Rise of the Kern Foundation.]

“I fell in love with the building, and I love Milwaukee. I will never leave,” Martin said after the meeting in a brief interview with Urban Milwaukee. “I plan to give it some TLC, and give something back to the community,” she said.

“I want to leave my stamp on it and let other people enjoy the building,” she added.

The building at 211 N. Broadway was designed by the prominent Milwaukee architect A. C. Eschweiler, and was first called the G. Patek Warehouse. The first tenant of the four-story Cream City Brick structure was the Columbia Knitting Company. A ghost sign for that firm can still be seen on the south side of the building.

There is a no-build easement on the vacant lot to the south, enabling the construction of the projecting balconies and the 21 windows that will largely match in size and scale the existing fenestration of the street facade. This should offer the one- and two-bedroom units more light than is customarily found in the deep structures of the Third Ward, where most buildings are built side-by-side.

The contractor for the project will be Kelly Construction & Design, said Mark Lathers, vice president of that firm. Kelly most recently was the contractor for the remodeling of the old Prime Leather Finishes building at 202 S. 2nd St., at the southwest corner of W. Freshwater Way. That building, developed by Kaufmann, is now home to Purple Door Ice Cream Co. and its retail store. 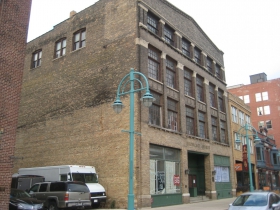 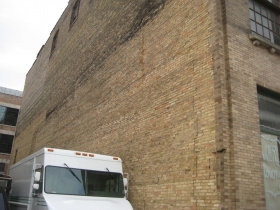 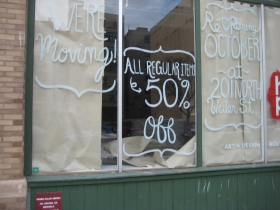 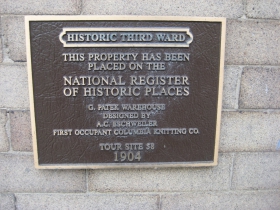 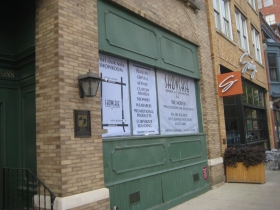 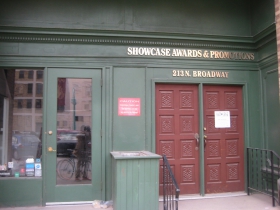 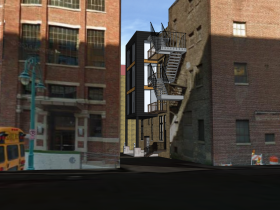 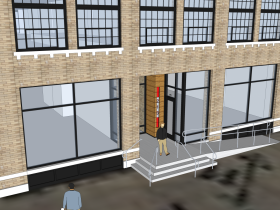 In 1970 the Northwestern Coffee Mills, Milwaukee’s first gourmet coffee purveyor, opened in the building at 211 N. Broadway. Fifteen years later, owner Harry Demorest said the neighborhood hadn’t changed a bit since he moved in. At the time, the Third Ward was still virtually desolate. Efforts to make the neighborhood chic would be doomed without a residential component, he told a reporter.

Nearly thirty years later, the Historic Third Ward is brimming with residential units and has no shortage of chic merchants. The building at 211 N. Broadway is one of the few remaining historic structures to remain undeveloped. Future development in the area will be on the neighborhood’s dwindling stock of vacant land, mostly on its east end.

The Historic Third Ward Architectural Review Board approved facade alteration plans for the Mitchell Leather Building, 226 N. Water St. at its Wednesday meeting. At the October meeting, AG Architects announced it planned to incorporate six recessed balconies on the street facade of the structure, which, like the 211 N. Broadway building, was one of the few remaining developable historic structures in the neighborhood.

But at the time, the board objected to the appearance of the balconies, which would have created a discontinuous facade on the structure. They asked for the architect to design operable doors for the balconies. The solution proposed at the November meeting will incorporate the suggested changes. The balconies will also have modest-sized railings and will retain a recessed entryway to the structure.

There will be considerable tuckpointing and resurfacing of a crumbling north wall of the structure. Board members still had some reservations about the exterior lighting of the property, and asked the architect to come back with lighting fixtures that are either era-specific or contemporary.

Ald. Bob Bauman, the chair of the board said he thought the balcony solution was a good one.

“The balconies are a nice idea,” he said. “I think they will work out very well.”