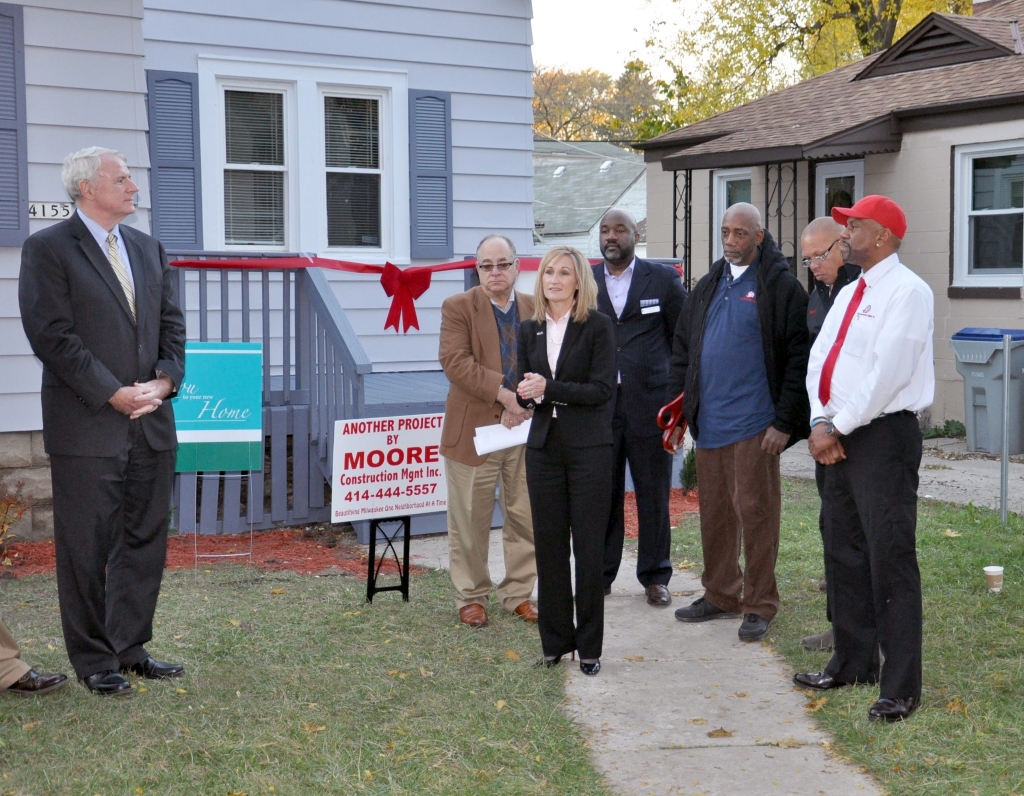 On Wednesday evening, a crowd of about 30 people, including bankers, contractors, community activists and reporters gathered outside a 2-story, four bedroom home on the 4100 block of N. 39th Street, awaiting the ribbon-cutting ceremony for NW Impact’s first lease-to-own home. The last of the day’s sunlight sparkled between the bright fall leaves as they waited for Demetrius Brooks and Chimere Liddell-Brooks and their 10-month old foster son, who were to move in that day.

At 5:30 p.m. Mayor Tom Barrett arrived, but the family still wasn’t there. Seeing the Mayor, Howard Snyder, Executive Director of the non-profit Northwest Side Community Development Corporation (NWSCDC), parent organization of NW Impact, called out “They’re still working!  We like that!”

The house smells of fresh paint from a porch touch-up that was completed just that morning and there are still a few details to take care of, noted Willie Smith, Director of Housing for NWSCDC, but the major work is completed, some of it by the former owner who was rehabbing the house when it fell into foreclosure. “We thought it was going to be a simple fix,” said Robert Moore, owner of Moore Construction, contractor for the job. But vandals hit the house repeatedly, damaging the interior, and stripping the copper. The house is one of eight that Moore Construction is working on for NW Impact, and though they’ve hired about ten people, Moore explained, those workers have low skill sets and are still being trained.

By then the Liddell-Brooks family arrived, and Snyder opened the ceremony. “Everyone is happy,” he declared. “The Mayor is happy.  My board is happy. The lawyers are happy,” he went on, as laughter erupted from the crowd. The phalanx of bankers gathered on the lawn erupted spontaneously. “The banks are happy!”

Jayne Hladio, Senior Vice President of U.S. Bank, which donated the house, followed Snyder and, like him, emphasized the collective effort that brought this house back to life, and the continued effort that will be needed if the housing program is going to repeat this initial success. “This is what we are all about as a community bank. This is evidence that public-private partnerships can work,” she told the crowd. “This is not the end. We’re not done. We’re going to need our partner banks to get involved.” The project, she concluded, demonstrates innovative ways to rehab foreclosures and reinvest in Milwaukee’s neighborhoods. 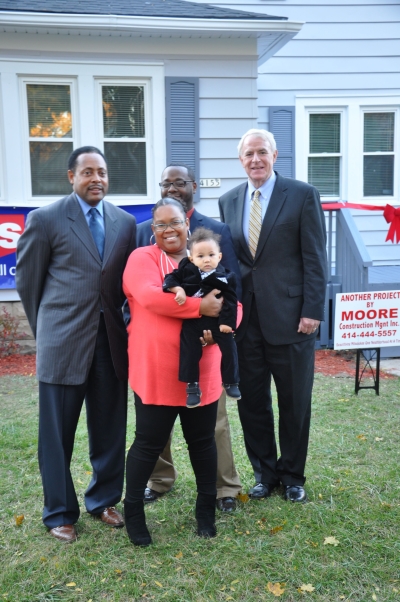 The Liddell-Brooks family is moving in to a new home. Photo by Susan Nusser.

Barrett began his speech noting that he grew up around the corner at 4073 N. 40th Street, where he remembers painting the family’s white picket fence with his father. “I love this housing stock,” he said. “And this housing stock should be here for families.” Getting houses off the list of foreclosures, he pointed out, not only stabilizes the neighborhoods, it also increases the city’s tax base. “I want to put dollars back into he city’s coffers. No shock there.” Like everyone else, he congratulated PNC and US Banks and the NWSCDC for coming together in a successful partnership.

“This is what I got into government for,” said Ald. Willie Wade, when it was his turn to speak, “to help families, to help the community, to help the city I love.” The family should be congratulated for moving into the “magnificent 7th District, just in time to pay their taxes,” he adds.

The NW Impact housing program purchases city foreclosures and rehabs them with the goal of selling them to homeowners in the community. About half of their $4 million in start-up financing comes from PNC Bank, whose representatives are on hand for the ribbon-cutting ceremony, and the other half comes through the city from the Wisconsin Housing and Economic Development Authority. According to Snyder, Wyman Winston of WHEDA first approached him with this idea 3 1/2 years ago. At that time, Snyder was reluctant. “I didn’t want to be a housing person,” he told me. “I certainly didn’t want to get into the foreclosure business.” It took about eight or nine months to put the financing together. “I give the city a lot of credit.  They were the only ones who were interested.” Now that the program is picking up steam, partners are coming forward. “People only get involved because there’s money. Let’s be honest,” he added.

Holding her 10-month old foster child, Chimere Liddell-Brooks, who is a teaching assistant at Highland Community School, explains that the family ended up here because the Milwaukee Metropolitan Sewerage District planned to tear down the houses on their old block at Roosevelt and 30th Street so it could restore a stream there that would mitigate flooding in the area. “We were at the beginning of the road to homelessness,” she said. Initially they were going to rent, but Demetrius Brooks explains, “my wife wanted to be a homeowner.” The city had a relocation program and, said Brooks, they “took care of everything.” After attending a meeting at NWSCDC, they were looking through the city’s list of foreclosures, thinking they might rehab one on their own. By then Brooks had taken a job in the same building as NWSCDC, where he ran into housing director Smith who told him he might have a house for him.

The housing program, explained Smith, is designed to work. “We have patient capital.” The loan terms are favorable for the long haul of bringing back the neighborhood of the 30th Street Corridor rather than focusing on the quick profits generated by the housing markets in the halcyon years before the 2008 recession brought so many of the city’s houses into foreclosure. For this first house, Smith explained, they started rehabbing the house and then found a buyer. In the future, they’ll turn the process around—finding the buyer first and rehabbing according to their financing terms.

The housing market is on NWSCDC’s side in this initiative. Low interest rates and low tax assessments put the cost of a mortgage at about the same amount as rent. “If the contractor is right, if we choose the right house, it’s designed to win,” says Smith.

The Brooks family is in the house to stay. They already lived in the neighborhood and they love it. As the last of the day’s light fades away, family and friends start to haul suitcases into the house. “We’re looking at being able to purchase in about two years,” says Brooks, and he’s dedicated to this community — and to its politics. “I want the state assembly seat in 2016. I’m not going anywhere.”