And still rising, with percentage of negative ads higher than in nearly any state, study shows.

By Bill Lueders, Wisconsin Center for Investigative Journalism - Oct 21st, 2014 12:42 pm
Get a daily rundown of the top stories on Urban Milwaukee

Like them or not — and most people don’t — television ads are a mainstay of modern political campaigns. They arguably matter more than debates, websites and media coverage.

But political ads do help define issues and provide useful information about candidates. In Wisconsin, they are central to the battle between Republican Gov. Scott Walker and Democratic challenger Mary Burke over the roughly 4 percent of the electorate that is still undecided. 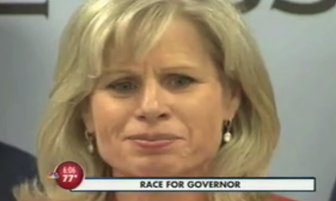 Mary Burke in a screenshot from a negative Walker campaign ad.

The Walker and Burke campaigns have each released about a dozen ads since the Aug. 12 primary, according to the archive AdWatch on WisPolitics.com. Outside groups have generated about half as many.

The national nonprofit Center for Public Integrity is tracking how many ads ran and at what cost. The group’s State Ad Wars Tracker, updated weekly, tallies broadcast and national cable TV political ad buys — even the otherwise unreported “issue ads” that don’t expressly call for a candidate’s election or defeat. It only counts ads that have already aired. 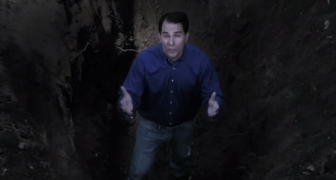 Scott Walker in a screenshot from a negative Burke campaign ad.

Through Oct. 13, the tracker estimated, more than 38,000 ads had aired in the Wisconsin governor’s race, at a cost of $12.7 million. The Walker campaign spent $4.9 million on ads compared to Burke’s $4.2 million. Overall, Burke and her backers had a slight spending edge.

The leading outside group spender, at $2.1 million, has been the pro-Burke Greater Wisconsin Committee. The group, funded largely by labor unions, engages in express advocacy as well as issue ads. In the governor’s race, it’s run mainly the latter, like the one that ends, “Tell Gov. Walker to stop selling out Wisconsin farmers.”

Walker’s backers include the Republican Governors Association, which has booked more than $2 million in state ad time through its offshoot, Right Direction Wisconsin.

Modern ad campaigns are remarkably nimble. On Oct. 6, the national political group Emily’s List, which plans to spend $1.2 million on Burke’s behalf, launched an ad ripping Walker’s record on abortion. That same day Walker came out with his own ad striking a moderate tone, saying he wanted “to increase safety and to provide more information for a woman considering her options.”

Within days, the Burke campaign was airing an ad showing Walker affirming in a 2010 interview that he opposes abortion even in cases of rape and incest.

Walker and his allies, meanwhile, pounced on news that Burke’s jobs plan included material her hired consultant recycled from other candidates. This drew charges of “plagiarism” in ads from Walker’s campaign and Right Direction Wisconsin, which Burke sought to defuse in an ad of her own.

Most of the candidate ads and nearly all those from outside groups have been at least partly negative, according to the tracker. One notable exception has been the National Rifle Association, which to date has run just positive ads urging voters to “Re-elect Scott Walker.” The group plans to spend $1 million in all.

A national ad tracking project at Wesleyan University found that Wisconsin’s gubernatorial race had the nation’s smallest share of purely positive ads during a two-week period in September and more recently ranked among the top states for purely negative ones.

But University of Wisconsin-Madison journalism and mass communication professor Michael Wagner, an expert on political messaging, finds the silver lining. For one thing, he says, the ads in Wisconsin have not been as personal or harsh as those in other states.

Moreover, Wagner cites research showing that negative ads contain more policy information than positive ones. There are “perverse benefits” to these ads, he says, in terms of educating voters.

Wisconsin voters will have many such educational opportunities before the Nov. 4 election.