Both Sides Wrong About Walker’s Impact on Jobs

Actually, the data shows Gov. Walker has had little impact, positive or negative, on how the state grows jobs.

Both Scott Walker and his challenger Mary Burke have released their jobs plans for Wisconsin. While they don’t agree on much, they do agree on one thing: that the Wisconsin jobs trajectory radically changed in January 2011 when Walker took office. 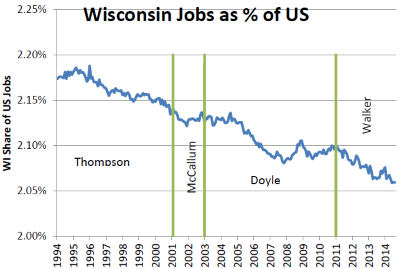 Walker’s plan is particularly obsessed with drawing a sharp contrast with his predecessor. It mentions Doyle by name 33 times, more even than his challenger (29 mentions of Burke). By contrast, the Burke plan mentions Walker three times.

When Doyle was inaugurated, Wisconsin had 2.13 percent of US jobs; today it has 2.06 percent. This may not seem like a big difference, but the steady, long-term decline in the proportion can have a major effect when job growth is measured.

To what extent can Wisconsin’s job performance during the Doyle and Walker years be explained by these two factors: the ups and downs of US employment and slower overall growth? Using the ratio of Wisconsin to US jobs during the Doyle administration, I first used regression to project how the Wisconsin fraction of US jobs would change over time.

This ratio was then multiplied by the US jobs numbers to predict Wisconsin jobs over the course of the Doyle and Walker administrations. The red solid line shows actual jobs, while the green dotted line shows those predicted by the model. As can be seen, this model does a remarkably accurate job of predicting most Wisconsin job numbers over the past 12 years. In any month the model is within 10,000 jobs (over or under) of predicting the total number of Wisconsin jobs (which have ranged between about 2.7 million and 2.9 million). 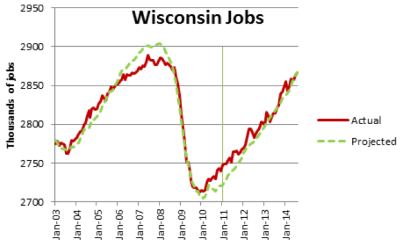 There are two periods in which the model’s predictions diverge from the actual job numbers: the period immediately before the economic crash of 2008 and immediately after it bottomed out. The first was also the period of the bubble in housing prices and “irrational exuberance” in the financial sector. Wisconsin’s housing bubble was smaller than nationally and its financial sector is relatively small, likely explaining much of the difference.

Likewise, the second divergence can also be laid at the feet of Wisconsin’s smaller bubble. If fewer houses were under water in Wisconsin than nationally, the recovery would be easier. 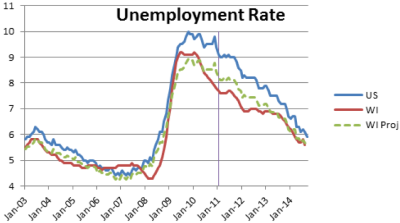 A second number relevant to the jobs number is the unemployment rate. The second graph here shows the US and Wisconsin unemployment rates over the same time period. First, regression was used to calculate the relationship between the Wisconsin and US unemployment rates using numbers from the Doyle years. The resulting relationship was then applied over the entire 12-year period. Again, the results support the hypothesis that the most important determinant of the Wisconsin economy is the national economy. On average, the actual and predicted rates differ by less than 0.3 points.

Although this model does a pretty good job overall of predicting the unemployment rate, it underestimates the rate before the crash and over-estimates it by the end of the Doyle years. Again, it seems likely that the lower housing bubble is largely responsible.

As the Walker jobs plan is happy to point out, the one period where Wisconsin’s rate exceeded the national rate roughly corresponded to Burke’s term as Commerce Secretary. The unspoken assumption is that there is something she did to cause this effect, but cause and effect has never been explained. Again, the more likely causes are the housing and financial bubbles which probably caused national unemployment to drop more than Wisconsin’s.

The reasons behind Wisconsin lower peak rate of unemployment after the crash are unclear. Perhaps they reflect differences in Wisconsin’s work force and industrial mix. If Wisconsin employers believed skills were hard to replace, they might be more reluctant to lay off workers.

Whatever the reason, Doyle bequeathed to Walker an unemployment rate well under the national average. While still below the national rate, the gap has since been narrowing.

The Walker jobs plan makes no mention of his promise to create 250,000 jobs, so we get no hint of whether he and his administration have given any thought as to why they missed their target so widely. The 250,000 jobs goal itself has been widely derided as hopelessly unrealistic. It is not. Between January 2007, just before the economy started its collapse, and today, the US population grew 6.2 percent while US jobs grew only 1.4 percent (and 0.5 percent in Wisconsin). If US jobs had grown at the same rate as the population, the model predicts that Walker’s goal would have been comfortably met.

To understand the failure of Walker’s promise, then, one must look to what was happening in Washington rather than Madison. If the US Congress had decided to follow a policy of economic stimulation, instead of austerity, it seems likely that Walker’s promise would have been fulfilled.

5 thoughts on “Data Wonk: Both Sides Wrong About Walker’s Impact on Jobs”