Formidable singing the likes of which Milwaukee theater seldom sees, plus frequent tugs on the heart-strings, wipe from our thinking that some darker hues might have more memorably painted The Color Purple.

Taking on the 2005 musical that wowed Broadway sounded like a major challenge for the Milwaukee Rep. Deeper values than the sort of commercial brand that had already filled touring houses for the musical should be driving the season opener for the Quadracci Powerhouse (through November 2). Alice Walker’s 1982 novel, the original inspiration, holds a special place in the evolution of American social change. The possibility of using musical insights to further that journey had to be double motivation for one of the nation’s most highly regarded regional companies.

The production instead features some amazingly strong New York casting imports (some familiar, many new), who earn constant audience ovations and even yells of delight. The show also offers fresh proof of the Rep’s technical prowess, with almost too many sliding sets, flowing projections and furniture assembled in the dark, along with platoons of attractive colorful costume changes to evoke Georgia backroads culture over four decades.

If there are hidden geniuses they are the tech people as well as musical leaders Dan Kazemi and John Tanner, who have also assembled a great jazz and show tune six-piece band. Hidden behind scrim, it sounds like a full symphony. The sound miking is first-class (even with an opening night glitch) and batters a willing audience into submission and acceptance through vocal and instrumental power – and then the company adds nonstop physicality and onstage streams of townspeople and subordinate characters.

A team of major pop-attuned songwriters created this gospel jazz motif to a book by Marsha Norman, together accelerating and compressing the novel’s details of brutality, straying affections, bigotry and casual abuse. The story should be seen as an extraordinary not natural journey toward love and redemption, but that’s not the emphasis chosen for this adaptation. It’s sometimes a good score but often too slick and foot-tapping with harmonics and extended big notes that make the offerings on “American Idol” seem restrained.

For the Rep, this means more effort and even ruthless creative rethinking was needed to better capture the harshness of American rural black life and the emotional conflicts within Southern culture in the 1920s and 1930s. The production should have fought harder to get under the broad and almost condescending strokes of male dominance and beyond the gyrating sexual come-ons.

The musical mainly signals feminist themes with musical placards. The “Hell No!” anthem for powerful women is strutted by big-voiced Bethany Thomas as Sofia, a crowd-pleasing performance. There is also an intrusive “In Celie’s Pants” about liberated modern women that destroys any illusion of natural character development but sure gets responding patrons on their feet.

These alternate with outbursts of communal energy served up as choreographed chorus numbers. The men get to be “Big Dog” while the company as a whole digs into the orchestral oomphs of “Shug Avery Comin’ to Town” and many other musical sideshows. The juke joint jubilee “Push Da Button” is one of the dynamic showcases for the magnetic Christina Acosta-Robinson as mistress and plot changer Shug, and she does add a veneer of human sympathy for the put-upon Celie.

The commenting chorus is a trio of gossipy matrons, cleverly harmonized more as biddies slanging for laughs than plot development.   More emotionally effective are “Too Beautiful for Words” and “What About Love,” among the quieter songs that advance the message.

In the central role of Celie, the victim of forced marriage in exchange for a cow — robbed of her children and despairing of God’s understanding — Zonya Love smartly holds back before unleashing a remarkable singing voice. Though a personable presence throughout, she is best handling the unsure, frightened, almost mentally challenged Celie. She relies on facial changes and physical behavior to convey the growingly assured and self-understanding Celie, though hers is the central internal conversion in the story.

Let’s pluck out Carl Clemons-Hopkins in several roles (preacher, various beaus) as a good example of the sturdy service from the mass ensemble — 33 speaking roles plus dancing choruses among 22 individuals. Among individual role standouts:

Gilbert L. Bailey II is particularly energetic and engaging as Harpo. Stephanie Umoh captures the patina of longing and nobility as sister Nettie. As Mister, Nathanial Stampley not only has a powerful vocal presence but such a swaggering manner that his personal appeal covers his failure to convince us of the character’s change of heart. Mostly, the changes within the show’s characters are treated as a matter of gesture more than conviction, as staging devices or big demonstrative actions soon abandoned.

This is the sort of production where audiences will find tears flowing freely as women are abused, a mother is torn from her children, and reconciliations hover, with large musical underpinnings. How can we not respond to such familial concerns? But it’s easy to confuse a flood of tears with a flood of dramatic excellence. Especially with such marvelous voices. So the audience will have a stunningly great time of kinetic reaction and even growls of satisfaction when Celie and Sofia get even with the men.

Director Mark Clements provides several visceral touches – Sofia’s beating at the hands of ruling whites is echoed in shadow dancing by colonial troops destroying an African village. But far more was needed to dig out the humanizing details so the musical doesn’t become paper-thin in its sweep through history. Clements seems to encourages the sense that the audience is speed-reading four decades involving complicated emotional relationships.

It may have been smart and was certainly easier to trust this strong experienced cast following an existing model of how this musical should be done. But Celie’s central role as the giver who embodies the essence of real love ultimately seems too pat. That may have been Alice Walker and the musical’s intended message, and every audience grabs for that, but the musical theater form in the hands of nonprofit professionals deserves more rounded characterizations and more lasting rewards.

Instead, the Rep is simply transplanting Broadway to Milwaukee and proving it can. So it fails as original theater but certainly triumphs as imitative theater. 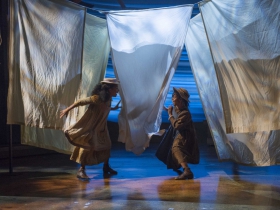 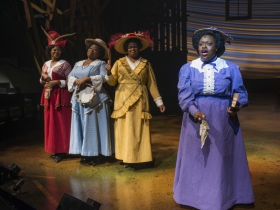 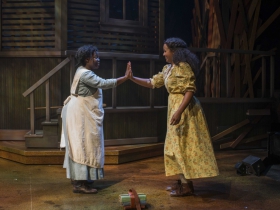 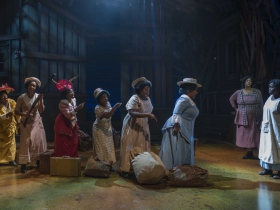 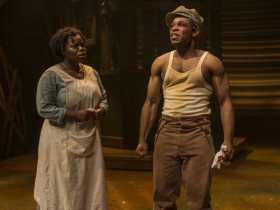 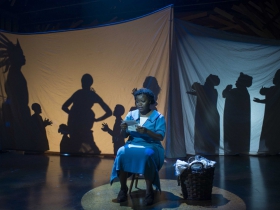