The Uptowner, Home of the Beautiful People

Riverwest building has been home to a bar for going on 130 years.

For 130 years, this frame building on the northwest corner of N. Humboldt Blvd. and E. Center St. has continuously served liquor to its customers. It endured the “noble experiment” by operating as a pharmacy dispensing medicinal alcohol. The Uptowner is a survivor, a former Schlitz Tied House that has been owned and operated by Steve Johnson and his wife Shawnette Smart since the place was only a century old.

Here we have the “Charm School,” and “The Home of the Beautiful People,” neon signs inform us. This self-mocking tone is a theme that runs throughout the place, which never takes itself too seriously. It comes straight from the soul of Johnson.

You’ll be able to experience three decades of anecdotes and reminiscences, with much of the original cast still present, this weekend, when the bar celebrates its milestones with a pig and corn roast, along with a standout lineup of local musical talent.

The Uptowner pays no distinction to race, class or background. In this sense, it set the mold for the Riverwest neighborhood. But in 1984, the area was divided and polarized in many respects as Milwaukee’s melting pot churned and the old immigrant housing gave way to a new generation.

The same goes for Johnson, who bought this building for $75,000 in 1997. He and Smart invested in other neighborhood real estate at the height of the market. They are still working their way out of that difficult situation, but that is a story for another day.

When you enter the bar from its original corner entrance, you are greeted with an expanse of old maple flooring, well-weathered by the feet of generations. There is a period-appropriate back bar, a lovely mahogany bar the likes of which you don’t encounter very often, and a church pew lining the Center St. wall. Three antique ceiling fans circulate the air. These items were all brought together by Johnson, who has an excellent eye.

There are a number of old odds and ends on the walls, carefully edited. But nothing is as plentiful as the realist paintings of Mike Fredrickson, who is represented by over a dozen works. Fredrickson is also one of the city’s finest musicians, but keeps his hand in the game by tending bar at the Uptowner. These are bonds that last decades here.

One portrait shows the face of a young red headed girl. Turn around, and there she is — your bartender, the daughter of your owners! These are bonds that last generations here.

Not many taverns have childhood paintings of their bartenders hanging on the wall, but here is Mary by Mike Fredrickson. Photo by Michael Horne.

Behind the bar is a large area filled with stuff of a kitchen nature, like coolers and racks. The bar takes a turn to the north towards its end, offering a little captain’s seat zone for the select or early arriving.

There are 15 metal, backed, fixed, padded stools of recent vintage at the bar. The place has got some big radiators. You notice such things with autumn coming on. There are four square tables with chairs along the pew, and it’s a long one. The bar also has a pool table that is sometimes hauled onto the street, and three pinball machines — all the rage, again. Wonder if there were pinball machines in the old pharmacy.

Part of the tavern — that without the tin ceiling above — was once a barber shop, and feels like it, curiously intimate, and set off from the main room. Way in back, on the west wall, is a double door leading to a lovely little garden, where the grills will certainly be fired up this weekend. Who the heck knows what will be fired up this weekend! A gate opens directly onto Center St. for special occasions.

Music is controlled by the owner. That includes an extensive selection of decades worth of tunes, and frequent live performances, including the city’s oldest Hip-Hop night, Johnson says.

[For a more detailed history, please read the Urban Milwaukee review of the Uptowner by Audrey Jean Posten from March 2013. ]

On Saturday, September 20 the Uptowner will “celebrate thirteen decades of dependable service to ‘the beautiful people.'” [Fore more information please read the press release for the event.] 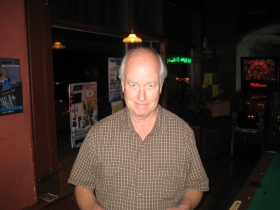 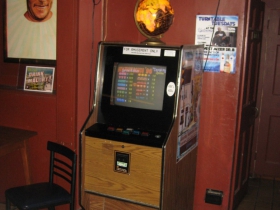 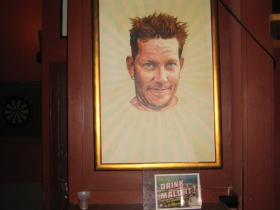 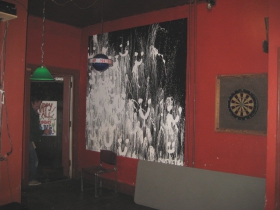 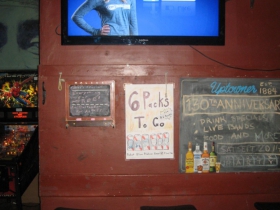 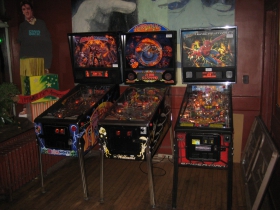 0 thoughts on “Taverns: The Uptowner, Home of the Beautiful People”