Local talent reprises her acclaimed role as a diva in the Milwaukee Chamber Theatre’s celebrated production.

Watching a diva instruct advanced operatic voice students at Julliard in the 1970s inspired playwright Terrence McNally to create his own Broadway-bound 1990s version of Maria Callas in “Master Class,” a fascinating mesh of opera and dramatic psychology.

Few performers can project their own individual creativity into such an imperious, funny, demanding and pitiable Callas as McNally imagined. But few performers are named Angela Iannone. She reprises her role as Callas and offers a “Master Class” in acting through August 24.

Iannone first created the role for the Milwaukee Chamber Theatre 15 years ago. If you never saw her then, well, that’s your loss. Even if you did, you’d be wise to return for fresh insights, nuance and impish energy – a forceful reminder that a good performance cannot be fully appreciated in one sitting, and that a good actress becomes greater with time and constant training. I doubt if there is a better example anywhere in the country at the moment.

She has created a ferociously scary diva that evolves into a poignantly lost soul. This version of Callas requires more than interpretive skill, coiled physicality and supple vocal pyrotechnics. It demands (and provides) empathetic artistry that explores the hidden motivations behind the public persona. It is a remarkable demonstration of what good acting can do in a year that is shaping up as a season fortissimo for Iannone, who will play Amanda in “The Glass Menagerie” and recently participated in a Ten Chimneys master class.

A mere hawkish look and wave of dismissal from Iannone is enough to fascinate any audience. Callas’ character demands silence, yet patrons disobey with laughter and applause…when they dare. Iannone must interact while staying pinprick alert for the fast paced past dialogue and technical cues, which includes the use of Callas’ recorded voice, a focal point for many versions of the production, but not this one.

Iannone has something of a diva reputation in Milwaukee herself, but “Master Class” is hardly a showcase of one diva matching another (except for advertising purposes). Her understanding of the role is much deeper than that. She is unassuming in her willingness to give into the moment, demand her own and create surprises along the way. She respects the play and subtly masks (and often conquers) its shortcomings, namely, no strong finish and a tendency to rely on the sensationalized allure of Callas’ personality.

McNally has a profound understanding of how opera and dramatic dialogue complement both camps. This is why there are two integrated directors: James Zager, head of Carroll University theater, and Jill Ann Ponasik, artistic director for the Milwaukee Opera Theatre. The piece requires genuine operatic singers to serve as partners while playing foil, victim and inspiration for Callas—delicious acting and singing opportunities that won Audra McDonald her first Tony.

Callas is ruthless as she embarrasses students, which tests their determination. In the process she revisits rivalries, her excess weight, her emergence as an icon of style, and her La Scala triumphs. Her personal history dictates what she teaches, solidifying a heightened selfishness even as she relays lessons on the sacrifices required of art.

McNally couldn’t help but delve into the tabloid journalism side of Callas’ career. He offers trancelike excursions into the past whenever the young sopranos sing or the play requires a dramatic resolution. Her interior monologues lead to coarse and brutally sexual memories of her affair with Aristotle Onassis. Iannone rises above such words to translate vulgar sexual bluntness into aria-like recitatives.

When Verdi’s “Macbeth” morphs into Callas’ operatic Medea memories the actress finds the most telling dramatic highlight—the child she was forced to lose. McNally may have left room for this, but few actresses make us care for something so far beneath the headlines.

The enthusiastic tenor of Edson Melendez may have some difficulty keeping up with Iannone, but the crowd accepts his efforts. More successful, even if directed a bit too broadly in the comedy, is the “first soprano” role of Melissa Cardamone, determined to bravely sing on despite the insults hurled by Callas.

As the “second soprano” and the most confrontational student, Alicia Berneche displays a magnificent singing voice for the Verdi. She tries to modulate her voice to match what the diva demands. But in moments of drama, and there are several, she leans on her vocal power to hammer home the emotional putdown of Callas, which the audience eventually desires.

As the stagehand, James Fletcher squeezes every drop of humor available out of the act of carrying water. At the piano and blending with the recorded Callas tapes, music director Brian Myers effortlessly captures the patient accompanist who must deal with the vagaries of a diva. It is both deadpan acting and probably what he does in real life. 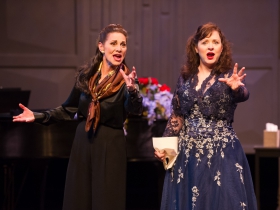 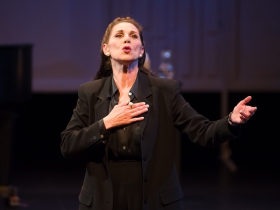 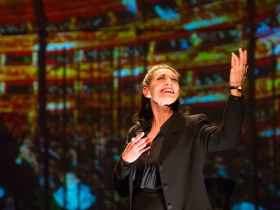