Bay View will be connected to Downtown and Oak Leaf trail will extend from Estabrook Park all the way to Ozaukee Interurban Trail!

By Dave Schlabowske, Bike Federation of Wisconsin - Jul 18th, 2014 12:02 pm
Get a daily rundown of the top stories on Urban Milwaukee

I attended the Milwaukee County Trails Council last Thursday and left with five pages of notes. I will try to boil down my scribbles into a few of the more salient updates on the higher profile trail projects.

Oak Leaf Trail Extension North: Top of the list is the final segment in the extension of the Oak Leaf Trail north to connect to the Ozaukee Interurban Trail. This is the section that will begin where the trail currently ends in Estabrook park and dumps you out onto Wilson, just south of Hampton Avenue. Referred to as Phase 4 in the map, the segment will connect the existing trail in Estabrook to the new segment of trail that begins at Sydney Place. 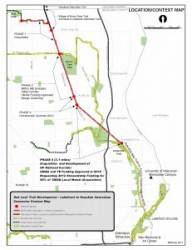 The staff from Milwaukee County Parks told us that WisDOT has approved an acquisition plat, which will allow the consultant hired to begin negotiations to purchase the right of way from the Union Pacific Railroad. At the same time, the county has begun negotiations to hire an engineering firm to do bridge design as there are a number of bridges in the project.

The bottom line is the County hopes to advertise the project for bid by October 27th of this year and begin construction in 2015. Because there are bridges involved, it is likely the project could take more than a year to finish. To anyone who has been riding the single track desire line trail for the last umpteen years, despite the trees growing up between the rails, that track was not officially abandoned until a few yeas ago, which explains why this has taken so long. The good news is there is finally light at the end of the tunnel!

Washed out Oak Leaf: Next on the agenda were the sections of  the Oak Leaf that were washed out in storms a couple of years ago. The County was awarded FEMA money to repair those sections and much of that work is either under way or planned for later this summer and fall.

The section of trail on the east side of Estabrook Drive is complete. The section on the west side is under construction now, and initial grading has been done in Hubbard Park, on the Beerline by Gordon Park and Kern Park, and on the hillside below Juneau Park where the Oak Leaf Trail runs along the west side of Lincoln Memorial Drive.

Stop getting lost on the Oak Leaf: Keith Holt from the Bike Fed staff recently finished a project evaluating wayfinding signs on the Oak Leaf Trail. As a result of that project, Milwaukee County purchased 200 new directional signs. They hope to have all those signs up later this fall.

The project will include a separated multi-use path, better on-street accommodations for bicycles as well as rain gardens and bioswales to collect stormwater runoff and cleanse it of silt and pollution. There also will be new LED lighting, improved pedestrian crossings and some minor traffic calming to keep motor vehicle speeds down and help reduce cut-through traffic. The overall goal of the project is to restore a parkway feel to the road — oh, and to fix the pot holes!

The second phase of the project will do the same for the Parkway from Burleigh to Church Street. The only caveat is bids for all construction projects have been coming in high, and county planners are concerned they might not have enough money budgeted to reconstruct the Parkway and build a separated trail from Church Street to Mayfair Drive (HWY 100). Because of that, the projects will be bid out with the trail as an alternate bid item and the county is applying for additional grants to supplement the money set aside now. If bids come in too high, the road will be reconstructed and the trail will be done later when more funds are available.

That could disappoint many people who live in the area, but at least all the design work will be integrated into this project.

Beerline Trail Extension: Kristin Bennett, the City of Milwaukee Bicycle and Pedestrian Coordinator, reported that the city has hired a consultant to begin acquisition of the abandoned railroad right of way needed to extend the Beerline Trail north from Keefe Avenue to Capitol Drive. City planners are similarly worried they will be short on funds to complete the project, but are moving forward with fingers crossed. The project will also include elements from The Artery.

Bay View to Downtown Connector: How old do you have to be to remember this project began as a bike path over the Hoan Bridge? OK, I won’t go there, but I am happy to inform readers the final segment of the WisDOT Preferred Alternative for the Bay View to Downtown Connector will be under construction this summer. This segment begins where the Kinnickinnic River Trail ends at East Washington Street and is planned to continue north along S. Water Street to Erie. The project will include a combination of better on-street accommodations and some additional off-street trail. A big part of the project involves removing abandoned railroad track and improving the active track crossings that have to remain.

The city has been working with the Wisconsin Dept. of Transportation to finalize plans for the reconstruction of 35th Street south of the valley. As part of that project, they are looking at improving bicycle facilities in the area. One key connection in the area is down to the Menomonee Valley Passage at 37th and Pierce Street. An ideal solution would be a bicycle boulevard on 37th Street, something suggested in the City of Milwaukee Bicycle Plan.

Kristin told the everyone at the Trails Council meeting that project is in preliminary design and they hope to have a project going next year. The sticking point right now is how to improve the crossing at National Avenue. Options include traffic signals, rapid flashing beacons, curb extensions, medians or a combination of any of the above. Given how close our office is to the Menomonee Valley Passage, I can testify that a connection to help more people get down to the trail is sorely needed.

West Allis News: Marty Weigle, a West Allis Alderman and local bicycle advocate extraordinaire, informed the group that West Allis met with the Wisconsin Deptartment of Transportation and they will not pull the funding from the remaining segment of the project creating a Crosstown Connector from HWY 100 to Lapham. Folks in communities across the state have been concerned about the sunset clause included in the last budget that allows the state to pull funding from projects not completed within four years. Because of the red tape involved in doing any construction project, particularly those involving negotiations to purchase right of way from railroad companies, it often takes much longer than four years to finish a project, or even start construction. Many road projects can take 6 years from the point planning begins.

Marty also briefed the group about the hundreds of sharrows that have been painted on the roads in West Allis. The new pavement markings are part of a general improvement in bicycle infrastructure in West Allis. Weigle acknowledged that many people are still a bit confused about sharrows, but that same confusion happened in Milwaukee when the city first began installing bike lanes. 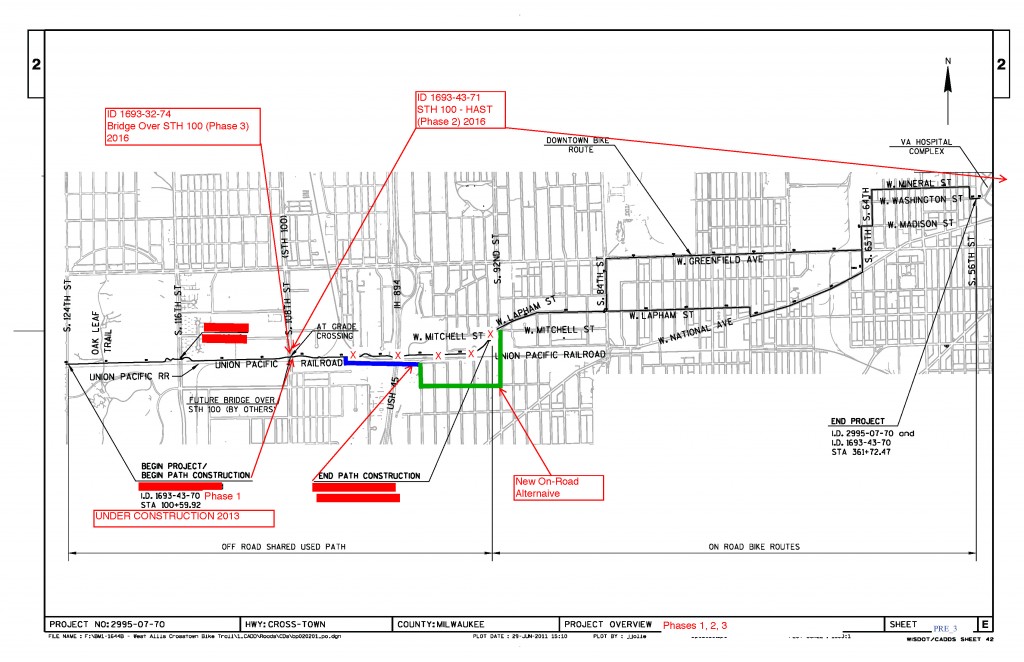 Click to open a PDF with a larger view of the map. 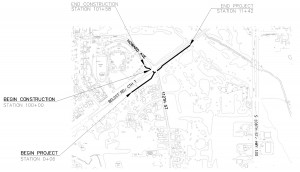 Click image to open a PDF of the Beloit Glide Trail 30% plans.

Beloit Glide Trail in Greenfield: The City of Greenfield has hired the engineering firm Bloom Companies to design the Beloit Glide Trail, a 1,350 ft. segment of trail along Beloit Road with connection to Milwaukee’s Oak Leaf Trail and the Southeast YMCA. While this is a short trail, it has the potential for many users because it provides a much more pleasant connection for people cycling and walking in the area.

Counting Bicycles: Milwaukee County and the city are both working to include trail counters on all future trail projects. They also have purchased three portable trail counters. Counting users is tremendously important, as every road project gets annual counts, but very few trails or bicycle facilities include counts. The Bike Fed is doing counts in the Riverwest Neighborhood as part of the benchmarking in our Smart Trips Project, and municipalities like Madison and Brown County have been doing regular counts on their trails for years.

Snow Plowing: While it may be hard to think about it in mid-summer (such as it is), both the county and city of Milwaukee are having internal meetings to develop plans to improve winter maintenance of bicycle trails.

Milwaukee Bike Maps: Neither the city nor county have funds set aside to update the map. The Bike Fed has offered a few times to print the maps and sell them, but so far that has not been OK’d. There is some concern about charging for maps rather than handing maps out for free so low income residents can get them. The GIS work still needs to be updated in addition to reprinting the maps, and that information would need to come from the city and the county, or the Bike Fed could do a physical inventory and create our own GIS, but that would increase the cost of the map.

Wow, I think that is everything!