The Impact of Obamacare

States that embraced it have greatly lowered the number of uninsured. What’s the impact on Wisconsin?

The two most wide-ranging and controversial parts of the Affordable Care Act (ACA or Obamacare) kicked in this January: the expansion of Medicaid to individuals earning 138 percent of the federal poverty line and the opening of federal and state exchanges for the sale of insurance policies. 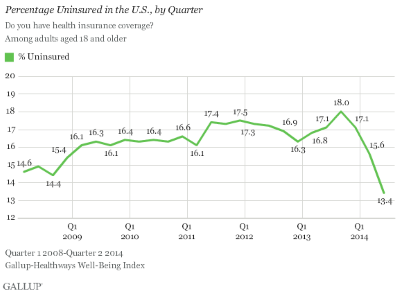 Evidence measuring the results is starting to trickle in. It seems increasingly clear the law has substantially reduced the number of people without health insurance. For example, Gallup reports a 25 percent drop between this year and last in the percent of people reporting they have no health insurance, as shown in the graph.

Not surprisingly, the drop in the uninsured rate was much greater in states expanding Medicaid than states that did not, as seen in the second graph. In an earlier report Gallup found the reduction in uninsured people was three times greater in states embracing the law—those setting up exchanges and expanding Medicaid—than in states rejecting it. It’s worth noting that even before the law kicked in the states that subsequently embraced Obamacare had lower rates of uninsured; so the gap between the two groups is steadily widening. 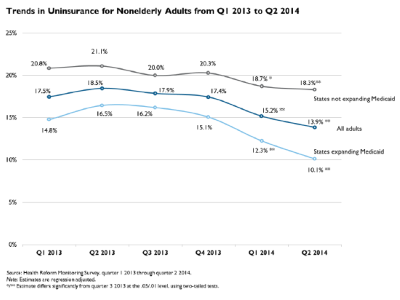 Other organizations report similar results. The Urban Institute finds a nationwide decline in the uninsured, but mostly in the states expanding Medicaid. The Commonwealth Fund found that 9.5 million fewer adults were uninsured and the rate fell most among young adults in states that expanded Medicaid.

Where does Wisconsin fit? The governor and legislature rejected the offer to expand Medicaid (called BadgerCare Plus in Wisconsin) to everyone whose income was under 138 percent of the poverty level and decided to let the federal government establish the exchanges. Thus, all the surveys lump Wisconsin with all the other states refusing to expand Medicaid.

Unlike other states rejecting the law, however, Wisconsin’s uninsured rate was fairly low in past years, placing the state 8th or 9th lowest in national rankings. One factor behind this low rate was that BadgerCare covered more families with children than did other states. This allowed Gov. Scott Walker to craft an alternative plan. The state removed parents above the poverty line from BadgerCare to make room for childless adults with income below the poverty line. Those dropped from BadgerCare were encouraged to buy insurance through the exchange, which kicks in at the poverty level.

Figures posted on the state website show BadgerCare enrollment increasing by a net of 43,000 since March, resulting mostly from a decrease of 45,000 parents and a jump of 98,000 in childless adults. Overall BadgerCare enrollment has increased every month since the changes took effect in April.

Of the 63,000 people who were taken off Medicaid, 30 percent obtained coverage through the exchange. Another 9 percent were able to re-enroll in Medicaid, leaving 61 percent with no coverage. In short, nearly two-thirds of the people who lost Medicaid have no documented insurance coverage (though a few may have obtained insurance from other sources).

Wisconsin’s response to the ACA puts the state in a position somewhere between those states that embraced the ACA and those rejecting it. Like in states embracing the ACA, Wisconsin residents at every income level are offered some form of health insurance: BadgerCare if their income is below the federal poverty line or, if income is above that level, an individual policy purchased through the federal exchange and receiving a subsidy if their income is below four times the poverty line. But like other states rejecting the ACA Wisconsin does not let those with incomes between 100 percent and 138 percent of poverty sign up for Medicaid.

Numbers based on actual experience are not available yet for this year’s Wisconsin enrollment. Actual enrollment counts for the first half of this year are likely to start appearing in the next few months. Gallup, for instance, plans to release its first state enrollment estimates in August. In the meantime it’s probably wise to avoid projecting national rates of enrollment to Wisconsin, given the uniqueness of its response to the ACA.

This caution would apply to a report issued recently by the Obama administration’s Council of Economic Advisers. Titled Missed Opportunities: the consequences of state decisions not to expand Medicaid, it estimated the health and economic effects of states not expanding Medicaid. The report made use of a simulation model developed by the Urban Institute to estimate that in Wisconsin about 120,000 additional people would be covered if the state had expanded Medicaid. This model takes account of each state’s differing demographics and its record of people enrolling in insurance but there is no mention of the study attempting to incorporate Wisconsin’s unique approach.

Thus while the CEA’s estimates are likely the best we currently have for most states, its estimates for Wisconsin should be treated with caution. The Walker administration criticized the CEA’s calculation but offered no alternative figures. In another month or so it may be possible to recalculate the CEA’s estimates of the impact on health and the state economy using actual enrollments.

Despite closing the income gap in coverage it is reasonable to expect enrollment in Wisconsin to lag that of states expanding Medicaid. According to the federal government’s healthcare.gov website a Milwaukee County resident whose income is just above the poverty line could purchase a “silver” policy for a net monthly premium of $8 (after the credit) and annual out-of-pocket costs capped at $500. While these costs seem small they could cause a person to think twice about enrolling, particularly if there were other bills to pay and the person feels healthy. Compared to Medicaid, where there are no premiums or co-pays, enrollment is likely to be lower as a result.

Those enrolling in the exchange could also be less healthy than the general population if people who feel healthy don’t enroll and run the risk of going without insurance. Economists call this “adverse selection” and it has been the downfall of attempts to establish high-risk pools.

A recently issued study from Citizen Action of Wisconsin offers evidence that those who set rates for companies offering insurance anticipated higher costs in states not offering expanded Medicaid. Using multiple regression models and rates quoted on healthcare exchanges, it found that premiums in states not expanding Medicaid averaged $370 higher per year than they would have otherwise. For Wisconsin the estimated extra cost was $250 more per year.

A remarkable lawsuit, if successful, could seriously damage Wisconsin and other states that opted not to set up their own exchanges. Called Halbig v. Sebelius, it challenges the ability of the federal exchanges to offer subsidies, based on ambiguous language in the law. It was brought by diehard opponents of Obamacare. A federal circuit court rejected the arguments against the subsidy but the decision has been appealed. Questions by two of the three judges on the appeals panel have led to speculation that they may vote against subsidies offered through the federal exchanges.

Although most legal experts give this case a low chance of success, it is applauded by some on the far right such as Steve Forbes and those at the libertarian Cato Institute. These days one should never be too confident that the courts won’t adopt a seemingly fringe position.

This suit is remarkable in part because of the portrait of a person so in thrall to an ideology that he acts contrary to his own financial interest. This is how the judge described one of the plaintiffs, David Klemencic:

He …. expects to earn approximately $20,000 in 2013. For ideological reasons, Klemencic does not wish to purchase minimum essential health coverage. Mr. Klemencic also has introduced evidence that the cost of minimum health insurance coverage, if unsubsidized, would exceed eight percent of his income. Thus, if tax credits were unavailable, he would be eligible for an “unaffordability exemption” under the ACA and could forego purchasing health insurance without incurring a tax penalty ….

The effect of the IRS Rule, however, is that the tax credit available to Mr. Klemencic lowers the cost of his insurance premiums so significantly that he no longer qualifies for the unaffordability exemption. …… The Rule thereby places Klemencic in a position where he has to purchase subsidized health insurance, estimated at approximately $20 per year, …. or he will have to pay some higher amount per year as a … tax penalty. Counterintuitively, by making health insurance more affordable, the IRS Rule imposes a financial cost on Klemencic.

This suit is also remarkable for its blithe lack of concern about the likely political fallout. If successful, this suit would directly affect only the 27 states opting to use the federal exchange, including Wisconsin. These states are predominantly Republican—even the three with Democratic governors. Thus this suit has the potential to create a situation where individual health insurance is unavailable in Republican states but is reasonably priced and near universal in states run by Democrats. As a strategy for Republican political success this seems problematic.

As a group red state residents were already disadvantaged before the ACA started: they were less healthy by most measures and were more likely to be uninsured. Preliminary enrollment estimates indicate that gap has grown. The Halbig case has the potential to turn this gap into a canyon. If some psychotically partisan Democrat had deliberately designed Obamacare to concentrate its benefits on states voting Democratic, he could hardly do more damage than that inflicted on them by terminally ideological conservatives.

Preliminary estimates show the ACA is succeeding in the goal of increasing healthcare insurance coverage, but Wisconsin’s story is still uncertain. And dangers lie ahead.

6 thoughts on “Data Wonk: The Impact of Obamacare”