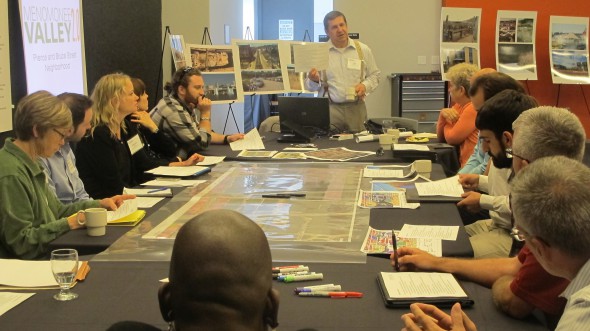 John Sabinash, vice president of Zimmerman Architectural Studios, and other urban planners led a series of discussions about economic growth, land use, recreation and sustainability in the Menomonee Valley. (Photo by Scottie Lee Meyers)

For those who attended, it was an opportunity to speak directly with urban planners about their concerns and have them immediately addressed.

David De Jesus, vice president of Vulcan Global Manufacturing Solutions, joined more than a dozen other participants at the Pierce and Bruce Streets group, where they discussed streetscaping, historic property preservation, neighborhood identity and land use.

De Jesus expressed concern about the possibility of adjacent parcels changing to residential zoning, threatening expansion opportunities for the company located at 1400 W. Pierce St. Among other products, Vulcan builds radiation shields, a booming industry in wake of 9/11 and new healthcare technology. The smelting required to build the shields is loud and would be a nuisance to residents. 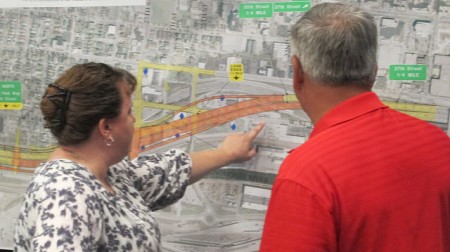 Participants at a forum on continuing development in the Menomonee Valley view a map of the area. (Photo by Scottie Lee Meyers)

De Jesus later said that having city planners there at the table hearing what he was saying ameliorated his concerns.

In the late 1990s city planners started working on a comprehensive plan for the valley’s future that would bring harmony among job growth, industry, recreation and environmental stewardship. The valley’s history and previous use promised it would be a difficult road ahead.

For centuries, the river was an artery sustaining life for the Potawatomi and neighboring Algonquin tribes with its abundance of fish, waterfowl and wild rice. The Industrial Revolution transformed the valley and sustained life in a new way, with low-entry jobs, wheat, rendering plants and tanneries. Even the valley’s clay gave the city an identity with its distinctive cream-colored bricks.

But it also brought low pay, deadly labor confrontations, ethnic divisions and a devastating amount of pollution — an 1874 Milwaukee Sentinel article called the Menomonee the “river of death… disgusting in the extreme to the sight and fearfully offensive to the olfactories.”

The Menomonee Valley is Milwaukee’s great divide; it quite literally splits the city in two, creating what Frank Zeidler described as a physical and psychological chasm dramatized over time by the eviction of natives, the fair housing struggle waged by Father James Groppi and African-American activists  and contaminated brownfields left in the wake of economic recessions.

City planners say that most of the goals and objectives recommended in the 1998 plan have been successfully completed. The stockyards and Milwaukee Road Shops are gone. Wetlands have been restored. Businesses such as Charter Wire, Badger Railing and Palermo’s Pizza have moved into the Industrial Center just east of Miller Park. Potawatomi Hotel and Casino, Marquette University’s athletic fields and the Harley-Davidson Museum have taken root, too. Connectivity has improved thanks to a new network of bridges and trails, linking the valley to residential areas.

In the fall of 2013, the city of Milwaukee, MVP and our other community partners kicked off Menomonee Valley 2.0 to build on the momentum created by the policies and projects of the original 1998 plan and to provide a new vision for the region’s future.

Since launching 2.0, planning staff and consultants have conducted a market analysis of the area to guide the next stages of the process. The current phase consists of a series of public workshops. The data and feedback will be synthesized and a redevelopment plan, scheduled for adoption by fall 2014, will be drafted.

To ensure public input, MVP launched planthevalley.org. The website allows stakeholders to weigh in and talk about their experiences in the valley. It also outlines the timetable for the new plan and will be home to the market analysis once it’s ready to be published.

Before splitting into separate discussion groups, participants listened to Nathan Guequierre, senior planner for URS Corporation, who provided an economic and land-use overview of the valley. He emphasized that the Menomonee Valley, which is similar in size to New York’s Central Park, is still ground zero for major redevelopment efforts.

Guequierre explained that most of the sectors driving Wisconsin’s economy are represented by businesses in the valley, and the grips of the recession are starting to loosen.

“Manufacturing is likely to start picking up,” Guequierre said.

He added that the valley’s businesses survived the recession through increased efficiency, but it appears that they’ve reached peak output growth and some companies will soon look to hire.

Hosting last week’s workshop at the Harley-Davidson Museum was very deliberate. The museum exemplifies what can rise from the ashes with good urban planning. In 2003, MVP purchased the former Morton Salt facility at South Sixth and West Canal streets. The site was packaged with adjacent city-owned properties and sold to the Harley-Davidson Motor Co. for its museum, restaurant and banquet facility.

Bill Davidson, vice president of the museum and great-grandson of the company co-founder, encouraged the crowd to seize this opportunity to contribute to the Menomonee Valley’s renewal.

“What’s most exciting about today is the opportunity we all have to influence a direction, a direction that’s really important for the city, its residents and the economy. That’s a real privilege,” Davidson said.