From Pakistan With Love

On his first-ever performance in Milwaukee, LA-based actor and comedian Kumail Nanjiani entertained Milwaukeeans at Turner Hall Ballroom with a host of jokes ranging from life in Pakistan to video games, marriage, the quest to become an American citizen, and heckling the crowd.

Born in Karachi, Pakistan, Nanjiani immigrated to the U.S. in 1996 at age 18, graduated from Grinnell College in Iowa with a degree in computer science and philosophy and somehow parlayed that background into a rising career as a comedian. Since 2008, Nanijiani has been featured on such comedy shows as Saturday Night Live, the Colbert Report, Ugly Americans, and Portlandia and has had starring roles in Franklin and Bash, Googy, Newsreaders, Burning Love, and Silicon Valley. He’s also done voice work for the animated series, Adventure Time, and Tell Tale Games’ The Walking Dead Season 2.

Quite a resume but Nanjani still mines his early roots for humor. One of his defining jokes involves himself at age 11 becoming obsessed with his boy-parts and scheduling his life around trips to the bathroom, culminating in an incident with his zipper and the birth of his love affair with underwear.

Showing no mercy for his conservative Muslim parents, Nanjiani did not shy away from Middle Eastern stereotypes. He noted that his parents never speak of his work and that his father consistently asks when he’s going to start med school. Being that he is in his mid-thirties, Nanjiani sarcastically replied, “I think that ship has sailed, dad.” He went on to reference that he is the first person in his family in 45 years to leave Pakistan. The previous person was an uncle who went on to marry a Christian woman and changed his name to Max leading him to be expelled from the family. Nanjiani was quick to note that he, too, married a white woman and has renounced not only his Muslim faith but all faiths, yet his family still talks to him, prompting this quip: “fool them twice, shame on them.”

Showing great improvisational skill, Nanjiani was quick witted in the face of heckler, putting down an audience member interrupting his story about touring Scotland. In that country, Nanjiani noted, while everyone could say his last name perfectly, no one could handle his first name, turning it into Kabul or Camel. “Kabul is in a place not a name!” Nanjani corrected, and “Camel? Oh yeah, I bet when that kid was born his parents looked at each other and said are you thinking what I’m thinking? Yeah, let’s f**k this kid’s life up forever!” with that name. As for why his surname was so easy for the Scots to pronounce: he had two distant relatives prominent in Glasgow media and the name had become a slang term for vagina.

Taking a stab at US immigration and racism, Nanjiani spoke of his 14 year quest to become an American citizen. Costing him over ten thousand dollars in lawyer and application fees, the entire process came down to the approval of one overzealous Christian lady with a Jesus of the month calendar on the wall, he joked. He explained that she was cold and gruff until he announced that he didn’t consider himself a Muslim. At that point, the woman happily asked what his parents thought about him raising his children as Christian. The quick-witted atheist replied with a forced smile and upbeat tone that they weren’t going to like it but his love for Jesus Christ meant more than them.

For the final 15 minutes of the show, Nanjiani opened up to crowd’s incessant heckling, turning the show into a Q&A session, which provoked plenty of laughs. A woman in the front row demanded Nanjiani show the scar on his penis he received from the zipper at age 11, and another humorous outburst came when a crowd member announced she was from India. Nanjiani replied by asking for Kashmir back and later referring to her as “our filthy Indian friend over there.”

Throughout the show, Nanjiani proved to be a hilarious and talented entertainer. Not one of his jokes went without roaring applause and at times a joke or two was missed because the audience was laughing so hard. And Nanjiani can bring the laughter without being overly profane. 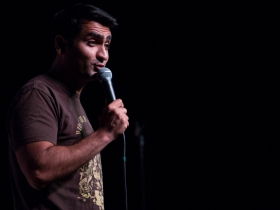 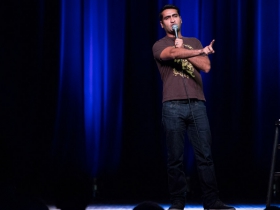 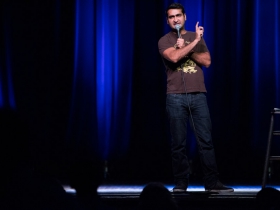 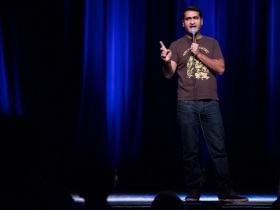 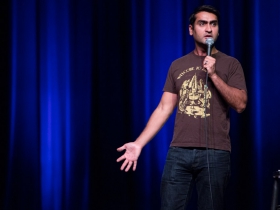 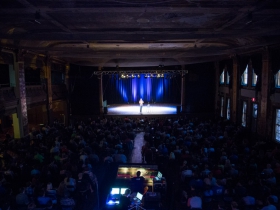