By Brendan O’Brien, Milwaukee Neighborhood News Service - May 29th, 2014 09:56 am
Get a daily rundown of the top stories on Urban Milwaukee 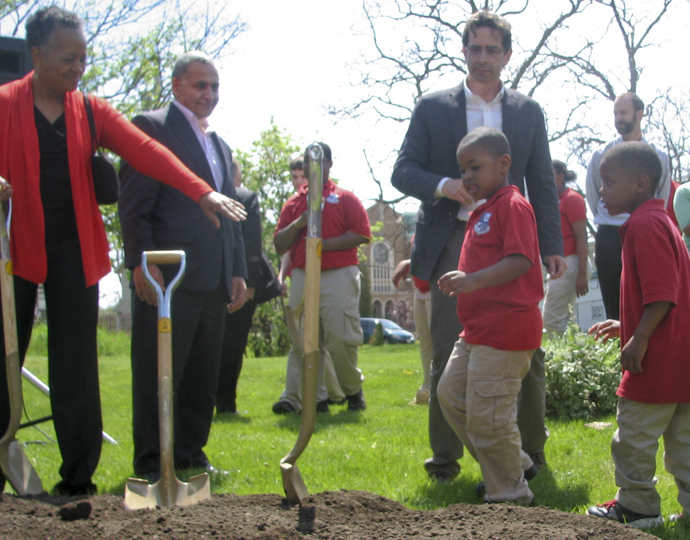 Leo Lemon strolled across the street from a grassy vacant lot where a pile of shiny shovels rested near a mound of fresh dirt.

The out-of-work 59-year-old said he hopes the park being planned across the street will one day make his neighborhood a bit safer by becoming a gathering place where men his age can socialize and play dominos.

“There will be a bunch of older guys over there and the (younger) guys will slow down doing what they are doing,” said Lemon, who has lived in the neighborhood for four decades. 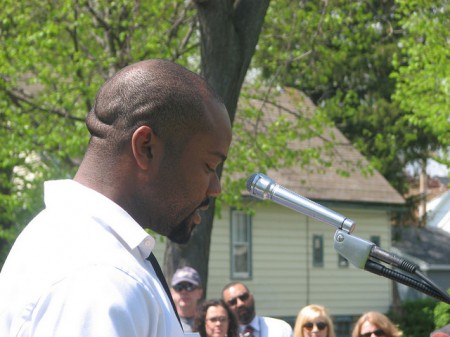 Moments later, Mayor Tom Barrett and city dignitaries used the shovels and dirt for a groundbreaking ceremony, after announcing the city’s plans to build a pocket park on the corner of 14th and Wright streets in the Lindsay Heights neighborhood.

The plan for the park is part of Barrett’s HOME GR/OWN Milwaukee initiative, intended to create economic development, healthy food access and neighborhood revitalization in the central city. The initiative was Milwaukee’s entry into Bloomberg Philanthropies Mayor’s Challenge, in which the city was a top 20 finalist.

“Our goal is to improve the quality of life in neighborhoods just like Lindsay Heights and those hardest hit by the recent recession,” Barrett remarked.

The park, expected to be open in early July, will consist of fruit trees and plants native to Milwaukee and paths made of porous pavers to capture rainwater for irrigation. A landscaping crew from Walnut Way Conservation Corp., a neighborhood civic organization, will be trained to install and maintain the system, the mayor said.

“Too many of our neighborhoods have been left with blight and safety challenges (which is) some of the fallout from the nationwide foreclosure crisis,” Barrett said. “Today we will begin to make these spaces active again to keep our neighborhoods strong and healthy for the future.”

The park will be named after Ezekiel Gillespie, a civil rights leader who won an important voting rights court case for blacks in 1866. City officials hope the space will improve the appearance of the block and provide a tranquil setting where neighbors can gather.

Barrett, whose voice competed with an incessantly yapping dog across the street, noted the park will be open to dogs.

“This is good. It will give the kids something to do and we need that,” said Roger Stewart, 49, who lives across the street from the park and looks forward to taking his five grandkids and his Labrador to the park.

One thought on “New Pocket Park for Lindsay Heights”