By Jabril Faraj, Milwaukee Neighborhood News Service - May 20th, 2014 09:34 am
Get a daily rundown of the top stories on Urban Milwaukee 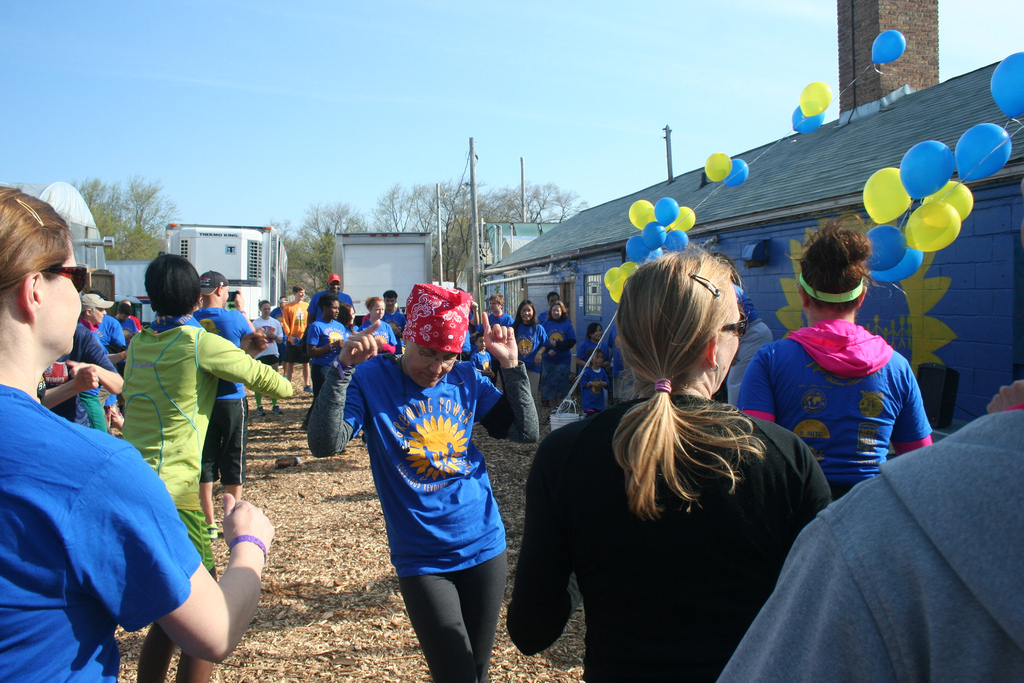 Participants gather at Growing Power before the run. (Photo by Jabril Faraj)

All of the funds raised at the first Good Food Revolution 5K walk and run will be used to increase the development of local gardens and farms, according to Will Allen, founder and CEO of Growing Power.

The 5K was held at Growing Power’s headquarters on West Silver Spring Drive.

Residents of the nearby Westlawn Gardens housing development, local farming advocates, exercise enthusiasts, Mayor Tom Barrett and Wisconsin State Senator Lena Taylor participated in the walk and run, which was sponsored by the City of Milwaukee Housing Authority to increase awareness about the importance of good food and exercise.

The 5K is an extension of the work Allen has been doing with First Lady Michelle Obama and her “Let’s Move” campaign since 2010 to combat child obesity in America, he said. “This is about awareness to get more people involved and thinking about the food they put in their systems,” added Allen, who noted that life expectancy in the U.S. is third in the western hemisphere, behind Canada and Cuba. 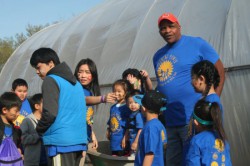 Will Allen, the founder of Growing Power, takes a breather with a group of participants. (Photo by Jabril Faraj)

And while one of the main focuses of “Let’s Move” is daily exercise, many of Saturday’s participants agreed that eating well is a piece of the puzzle that can’t be ignored. “Without good food, good exercise isn’t going to be enough,” said Derek Steinmetz, who was there with his wife and son.

That’s why “you need a combination of exercise and eating good food,” said Allen. “We really need to get back to eating good food and the only way to do that is to develop a local food system.”

But that is more difficult for some areas than others. Karen Parker, director of operations at Growing Power, said residents of Westlawn Gardens have to travel more than three miles to find stores that sell fresh food. “You have to catch a bus or have a vehicle to get to them,” said Parker. “There are no major grocery stores in walking distance for this community.”

Growing Power is dedicated to eradicating food deserts from Milwaukee but, in the meantime, the organization is doing what it can to heighten awareness among residents about what they can do, themselves. “We’re going to show [people] that walking is a healthy way of getting to the store to get what you need,” said Parker.

Cynthia Stoll, who supports Growing Power and Allen’s “good food revolution,” said she was excited to take part in the 5K because having access to and awareness of healthy food options is an intrinsic part of personal success.

“If people don’t have access to nutritious food and understand how to get it, whether they’re making it themselves or whether they’re buying it, they’re not going to have the fuel to do anything in their lives.”

Allen acknowledged that the group’s goals are lofty and there are still challenges to overcome but he said he’s encouraged by the progress he’s seen. “We’re not very healthy right now but…we seem to be going in the right direction.”