New study ranks Milwaukee as 16th hardest hit city, with 40% of homes underwater. But that may understate the problem. 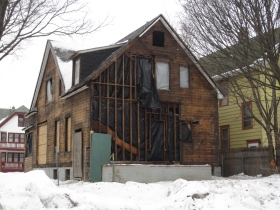 A home in Milwaukee’s Uptown neighborhood. The boarded up home is located at 2400 N 49th St. Property is city-owned. Photo by Jeramey Jannene.

A new national study by the Haas Institute has bad news for America’s cities, including Milwaukee. “Contrary to the claims of many observers that the recent rise in housing prices is solving the nation’s foreclosure and related economic crises, millions of families continue to face financial devastation from which many may never recover,” the authors note.

The study criticizes the media for overstating the impact of rising housing prices, noting that despite this trend, “the total value of owner-occupied housing still remains $3.2 trillion below 2006 levels… there are still some 9.8 million households underwater,” or nearly one in five of all mortgaged homes.

“In fact, the overall ‘post-recession’ narrative is misleading. Foreclosures and mortgage delinquencies may be down since the peak in 2009, but they have yet to return to pre-crisis levels,” the study notes.

While the economic meltdown began in 2008, home prices did not bottom out and mortgage delinquencies and foreclosures did not start to diminish until 2012, the study notes.  “Almost five million families have lost their homes to foreclosure since 2008, and foreclosures continue at rates higher than prior to the Great Recession.”

American households lost an estimated $7 trillion in household wealth between 2006 and 2011 due to the housing crisis, the study reports.  The hardest-hit population has been African Americans and Latinos, who experienced a decline in household wealth of 52 percent and 66 percent, respectively, compared to 16 percent for whites.

Prior to the meltdown, minorities with comparable incomes and credit-worthiness to whites were more likely to get turned down for conventional loans, as past studies have shown. Many African American and Latino homeowners rejected for conventional loans “were targets of abusive and reckless banking practices, including an epidemic of subprime loans with predatory features,” the study notes. “Banks, private mortgage companies, and mortgage brokers preyed on homeowners in low-income and minority areas” and “also targeted middle-class African American and Latino families who lived in neighborhoods with high proportions of minority families.”

But by then the damage had been done. The settlement, while helpful, is a drop in the bucket compared to $7 trillion loss in wealth for homeowners.

The new study looked at the 395 zipcodes in America with the highest percentage of homes that are underwater — those with negative equity, owing more on their mortgage than the market value of the home.  At first glance the problem seems to be concentrated on the boom and bust coasts. The study found that 18 cities in California and 16 in Florida are among the 100 hardest-hit cities.

But the Midwest emerges in the study’s ranking of the 11 states with the highest number of these 395 zipcodes: the worst was Georgia (61 zipcodes), followed by Illinois, Michigan, Ohio, New Jersey, Maryland, Missouri, California, and finally, Nevada and North Carolina, tied for tenth place with 10 of the worst zipcodes.

Wisconsin was not far below this, with eight of the 395 worst zipcodes in the nation, including seven in Milwaukee and one in Kenosha.  Milwaukee ranked as 15th hardest-hit metro area, with 23 percent of homes underwater. Number one were Las Vegas and Atlanta, both with 35 percent.

But the negative equity in metro Milwaukee was concentrated in the city, which ranked as 16th highest among 100 cities ranked, with 40 percent of homes having negative equity.  That was well below top-ranked Hartford CT, with 56 percent, but far above 100th place St. Paul, with 22 percent of its homes underwater.

And when you look only at bigger cities, Milwaukee ranked fourth worst, below only Hartford, Newark NJ and Detroit. All told, this city faces a problem of negative equity that is far worse than in most American cities.

What is being done to address the problem? The $25 billon legal settlement by the five banks was supposed to allocate $140 million to Wisconsin for remediation of the foreclosure problem, the overwhelming majority of which would have gone to Milwaukee. But Gov. Scott Walker grabbed nearly $26 million of it to close a budget shortfall, prompting bitter complaints from Mayor Tom Barrett and other city officials.

Barrett and the Common Council allocated $14 million in the city’s 2014 budget to address the problem of more than 1,000 tax-foreclosed homes in the city. And Wells Fargo has announced a $5.15 million program for Milwaukee to help prospective low and moderate income home buyers cover their down payments.

Milwaukee’s money will will come from the company’s NeighborhoodLIFT program, which according to Chris Hammond, senior vice president for Wells Fargo, will allocate some $104 million to cities in America, and is the company’s largest single philanthropic effort in history. The company also created a nearly $50 million CityLIFT program as part of the legal settlement to which it agreed, but none of that money has gone to Milwaukee.

Milwaukee still remains far short of the resources it needs to meet this challenge.

-One of the five authors of this new study is Gregory Squires, a sociology professor who taught for years at UW-Milwaukee and is now at George Washington University.

-Sheriff David Clarke has created some bizarre radio ads that combine a pitch for him with a plug for a company called Inet. Is this legal? I have no idea, but it hardly matters, the ads are so amateurish they are only going to make the increasingly silly sheriff look like a cheap huckster.