By Brendan O’Brien, Milwaukee Neighborhood News Service - May 13th, 2014 12:11 pm
Get a daily rundown of the top stories on Urban Milwaukee 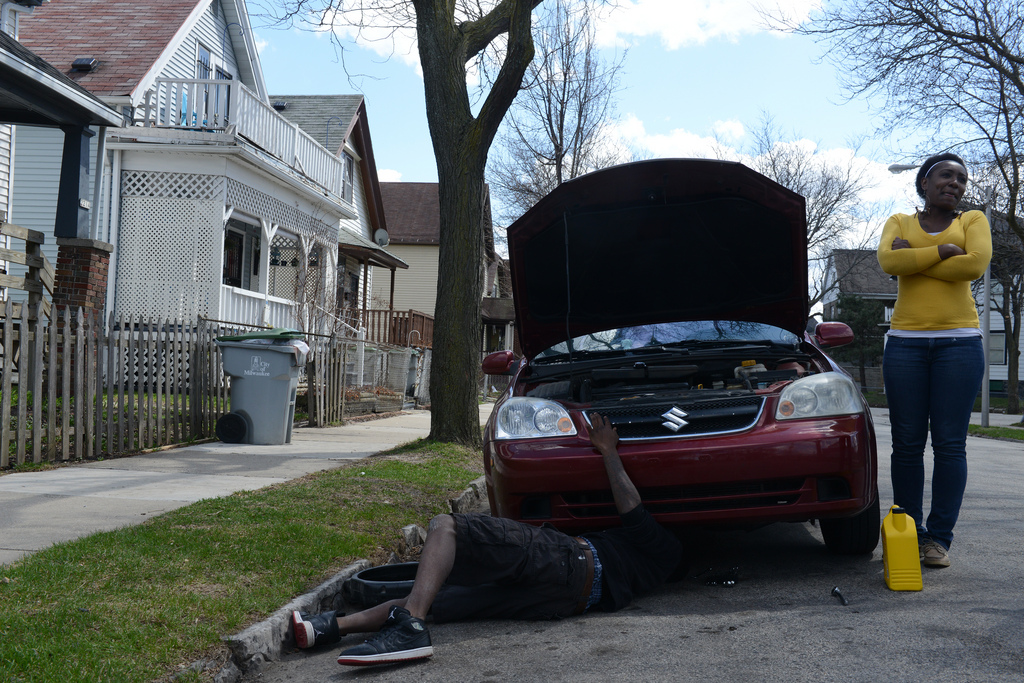 Smoke rose from underneath the hood as a faint stench of burnt oil came from the Buick Regal.

It was 1:30 p.m. on a sunny Saturday. Sequoia Raymond, sporting camouflage high heels, was headed out to celebrate her 22nd birthday over lunch with friends and family when she began to smell the ominous “tar burning” odor of car trouble.

“It’s a downfall. This ruins my life,” said Raymond, who dreaded the prospect of public transportation, especially after a trusted relative recently replaced the brakes and a water pump.

But rather than calling a tow truck or a service repair shop, which would have emptied her already light pocketbook, the health care worker dialed Erik Hill, a close friend and laid-off mechanic.

Within a few moments, Hill arrived near the corner of 34th Street and North Avenue and had his head under the teal sedan’s hood, casually pointing to engine parts with a lit cigarette between his right index and middle fingers.

“Your radiator is busted,” Hill said emphatically as the conversation with Raymond quickly turned to planning the necessary fix.

Ways to save, make money

Similar scenes depicting arrangements between poor central-city car owners and street mechanics trying to make ends meet played themselves out over the next hour within a 2-mile radius. For car owners, these arrangements mean much less expensive auto repairs and maintenance compared to what it would cost in a repair shop or auto dealership. For the street mechanic, they mean income.

“It saves you a lot of money when you can fix your own car versus taking it into the shop,” Hill said. “I charge, but I don’t charge an arm and a leg for doing the work.”

Savvy street mechanics, like Hill, keep a close eye on what Milwaukee repair shops are charging for labor — generally from $80 to $90 an hour — making sure their prices are much less. They also take advantage of free estimates and diagnostic work offered by repair shops. Once they learn what is wrong with the vehicle, they buy the parts and repair it on their own. 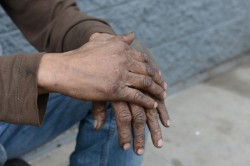 A street mechanic waits for a job at a local auto parts store. (Photo by Sue Vliet)

Five minutes later at the corner of 25th Street and North Avenue, a freckled out-of-work mechanic sat against a brick wall on a bag of tools and his coat. The 57-year-old, who had just landed a repair job through word of mouth, was waiting at the AutoZone, 2475 W. North Ave., for a customer to arrive with his vehicle.

“I got to eat. I have to work. I have no other choice, that’s my skill,” said Rick, 57, who asked that his last name not be published.

“No matter how bad I hurt, I still got to come out here and make money,” he said. Rick has been denied Social Security disability benefits.

Rick planned to inspect the car and then have the owner buy the parts inside the store. He would charge his going rate, about $50 or $60, for his labor. A warranty, guarantee or receipt does not come along with these types of street deals, just a handshake and the mechanic’s word, he said.

The work can be “dangerous and stressful,” Rick said. A fellow mechanic recently got “cut up so bad he almost died” and a few months ago Rick got into his own treacherous situation, he said.

“The kid pulled off with the hood still up on the car down the street so he could keep from frickin’ paying me,” Rick said. “Sometimes out here on the street, you can’t defuse the situation and it becomes a life-threatening matter.”

The young car owner turned thief stiffed Rick the $40 he charged in labor to fix a 1998 Saturn and another $45 for a small part, a job that would have cost hundreds of dollars at a repair shop.

Rick did not give chase.

“If I chased him and he had an accident, that’s on my conscious,” he said. “I still would like my money, but it wasn’t worth putting his life in danger. I did the right thing.”

Street mechanics also have to watch for the police as it is against the law to fix or maintain motor vehicles on Milwaukee streets. If caught, they risk a fine up to $100.

Reliable service from a friend

As Rick waited seven blocks to the west, two legs in shorts stuck out from underneath Michelle Taylor’s maroon Suzuki sedan as rhythmic rap music rang from a nearby house in the 2200 block of North 18th Street.

The oil and filter change would have cost from $30 to $100 down the street at an auto repair shop, but the man who attended to the vehicle, Mitchell Aaron, 20, charged only a few dollars for the supplies. The labor was free for his friend.

“The money means a lot. With where gas prices are in the city, it means a whole lot,” said Taylor, an unemployed 25-year-old, whose job prospects multiply by having a reliable automobile.

Taylor trusted Aaron to do routine maintenance better than an auto mechanic that she has never met, noting that when she goes into a shop, she is one of many competing for the mechanic’s time and attention.

“This is my baby. It’s nice to know someone who knows what they are doing,” Taylor said.

At 2:30 p.m., the rapping of a metal wrench onto a steel part echoed against a nearby brick wall at the corner of Center and 35th streets. Kendale Coats was on his knees, trying to remove a broken part from near the brake on the driver’s side front wheel of his silver 1994 Chrysler LHS.

The repair, if he took it to a shop, would have cost about $1,000, money that he could not imagine having, let alone spending on his automobile. Instead, the 50-year-old Coats, who has been repairing cars since he was 15, went to a local junkyard where he bought the part for $70.

Time was of the essence for Coats. He needed to complete the repair before Monday, when he was due back at work loading and unloading trucks at a Mequon company, where he makes $12 an hour.

“They don’t have a bus out there, so I have to have a vehicle to get to work,” said Coats, who keeps a pile of tools and an orange traffic cone in his trunk just in case his car breaks down while on the road.

One thought on “Central City Relies on Street Mechanics”