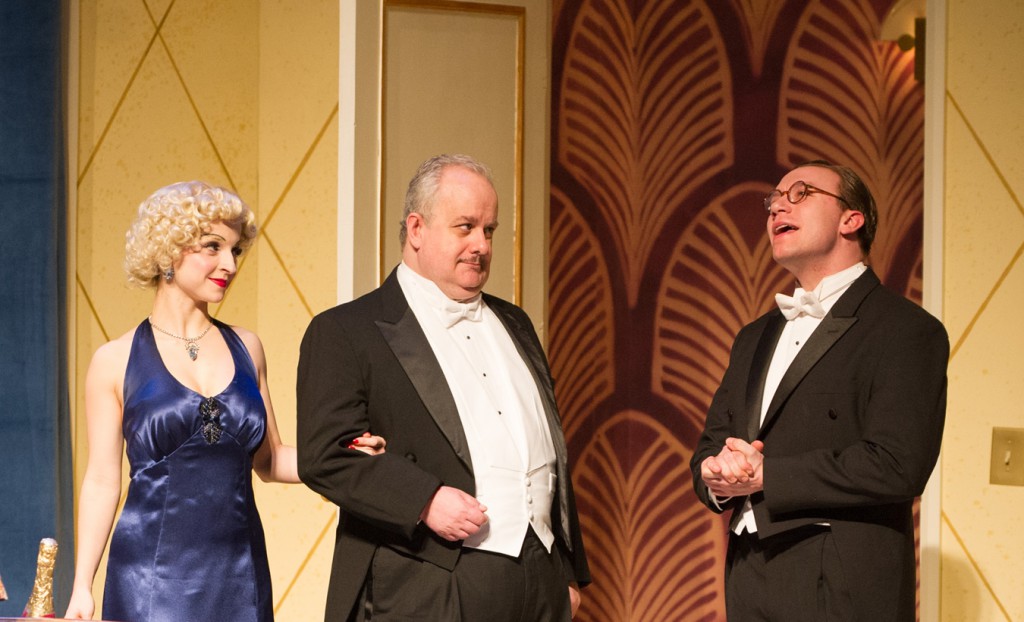 Ken Ludwig’s expertly constructed Lend Me a Tenor has dominated the commercial world of farce for a quarter of a century in multiple professional and amateur manifestations. Milwaukee now has a sturdy demonstration – not perfect by any means since this is a comedic form hard to sustain, demanding high-speed uniform skills and instant facial modulations.

But the Milwaukee Chamber Theater, as part of a collaboration using Marquette University students both on and off stage, does transport audiences to a land of mirth where laugher often erupts.

Through April 27 the production also has the ideal setting — the proscenium Cabot Stage at the Broadway Theatre Center, set up as an Art Deco Cleveland hotel suite in the 1930s. Within an exaggerated premise, eight characters slam six doors with remarkable clamor and exact timing, as they desperately scheme to disguise the belief that their guest performer, a world famous tenor in the part of Otello, has died.

Farce is built around ludicrous situations and desperate impersonations. Despite the emphasis on improbable buffoonery, there still must be human motors and egos inside the vamping and the stereotypes to keep us caring about the outcome.

The design crew and director C. Michael Wright have employed a reliable workmanlike efficiency for the production. If anything they orchestrate the postures too obviously, knowing that the strongest performers will look beyond the directorial instructions to elevate the manic highlights, the bellowing rage, the romantic confusion.

Ludwig is a good farce writer precisely because he understands how different roles require alternating reactions and moods to justify the punchlines and the double-takes. That means Peter Sisto as a bellboy enamored of opera stars can’t rely on impish faces alone as he interrupts the trysts. Another role might be built around one sustained note, such as the aggressive seductress acquitted well by Alexandra Bonesho. But yet another might require touches of self-delusion, missing in Linda Loving’s turn as an aging matron full of come-hither looks. Such variety is the sophistication of farce.

Likewise, the romantic Maggie is not just a large role about hiding in closets, played by Marquette student Hannah Klapperich-Mueller. It’s an ingénue roundelay of emotional extremes requiring varied attacks, not the head-on charge of a fullback hitting the line. But none of the letdowns in supporting parts are disabling because everyone at least has an enthusiastic capability and the top leads grab their opportunities with remarkable expertise.

The rounded professional underpinnings to the madcap misadventures are best embodied in Steven M. Koehler as the famous Tito the tenor, object of everyone’s desire who just wants a little peace and little bicarbonate. If Koehler teaches acting at Milwaukee High School for the Arts as well as he does it, our kids are in great hands. He finds that elusive bedrock of believability that makes so flamboyant a character likable as well as uproarious.

Similarly grounded in enough reality to uplift the ridiculous is Rana Roman turning the clichés of a spitfire Italian wife into a hilarious series of gestures and sneers.

In the central role of Max, the put-upon factotum and wannabe singer, Rick Pendzich starts too obvious in nerdlike mannerisms. But when he warms up, he bowls us over with extraordinary physical and vocal clowning, mixing Chico Marx desperation with subtle fluctuations of panic.

As the imperious father and master schemer driving much of the deception, Drew Brhel relishes this return to the 1930s era of bullhead bravado. When given room to maneuver his vocal power past the orchestrated physical antics, he demonstrates a mastery of the farce style, keeping the engine of confusion at full throttle.