"I’m a big fan of the Milverine. I think it’s great he’s become Milwaukee famous just by being around and being a badass." 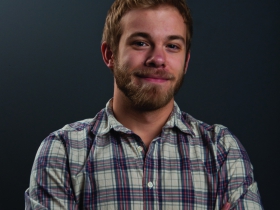 What is your job and its responsibilities?
Well, I’m a student at UW-Milwaukee, and I just finished up a graphic design internship with NEWaukee. It was a great experience, and I got to meet a lot of people. They also recommended me to my current job, which is another graphic design internship at the Milwaukee Art Museum. I just started there a few weeks ago, but so far, it’s been excellent.

How would you rate Milwaukee as a place to work and do business?
I can only speak as a student who has primarily worked design internships, but I’ve never felt there was a lack of demand for creatives in this city. I can’t say what it’s like for other fields, but if you’re doing good work and putting yourself out there, there’s a good chance you’ll find something right for you.

How would you rate Milwaukee as a place to socialize and play?
There’s a ton of stuff to do in Milwaukee. My girlfriend and I keep a list of restaurants we want to visit, and we try not to go to the same place twice. There’s a ton of local businesses, small shops, other stuff like that. If you can’t think of anything, you can just look online and find a dozen lists of things to do in Milwaukee. There’s always something new, even if you feel like you’ve done it all. It might just require getting out of your comfort zone a little bit.

What neighborhood do you live in and what do you like about it?
I live close to Brady Street, specifically on Kane Place. It’s a nice place to live while you’re still in school, because you’re near almost everything you’ll ever want or need. You’re surrounded by bars, restaurants, and the occasional festival, and still pretty close to campus. You can walk a couple of blocks and catch a bus to almost anywhere in the city.

Who is your favorite Milwaukee personality?
I’m a big fan of the Milverine. I think it’s great that he’s become Milwaukee famous just by being around and being a badass, and his cameo in the Milwaukee Film Fest trailer was hilarious. I’ve also heard he’s broken up fights and stopped people from getting mugged, which is pretty awesome.

What strikes you as the most unique thing about Milwaukee?
Milwaukee is great because people are excited to live here. We’re proud to say that this is our city. It’s filled with places that people have made their own. Even if you get bored with where you live in Milwaukee, well, there’s probably a great neighborhood that you’ve never noticed before that would love to have you. If you really give Milwaukee a chance, it’s hard to find a excuse to leave.

One thought on “NEWaukeean of the Week: Devan Brown”