Finally some progress. How my advocacy with state and city officials paid off.

By Dave Schlabowske, Bike Federation of Wisconsin - Feb 7th, 2014 10:04 am
Get a daily rundown of the top stories on Urban Milwaukee

I learned a long time ago to stay “zen” while riding my bike. Riding a bike is an inherently fun, healthy and safe way to get around, but if you don’t maintain your cool, you run the risk of letting others ruin your ride. Still, I think it is OK to get angry about the inequities in our auto-centric culture if you channel that anger into effective advocacy. 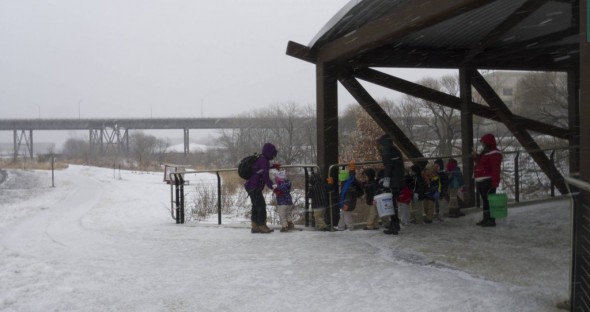 Ten little reasons why the Hank Aaron State Trail should be maintained in the winter. There are classes of little kids who use the trail most every day, all winter long. Here you can see they have to hold the railing and inch along the raised edge of the bridge because the path is iced over.

Don’t get me wrong, I don’t flip my middle finger or curse after a close call with an inattentive driver, and I don’t rant when I have a ride ruined by poorly maintained bikeways. Those things bother me just like anybody else, but I try to bottle my frustration to fuel my advocacy efforts to make a positive change. I try to channel my anger into advocacy.

Regular readers may remember a recent blog post I wrote in which I complained that I wouldn’t ride my bike to Milwaukee’s Winter Farmers Market because the best route from my house is on the Hank Aaron State Trail, which has not been plowed this year. Even though there are other on-street routes to the market at the Mitchell Park Domes, the lack of winter maintenance bugged me so much that I ended up coming home from the market all pissed off. 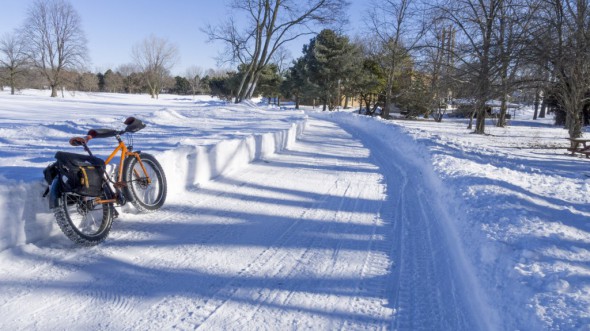 I recognized that I was depriving myself of locally grown produce in the heart of winter and the lack of plowing was really no different from the many other inequities we face given our unbalanced transportation system. I considered trying to be more zen about it, but sometimes we just have to make a stand or things will never change. So I sipped on my bottle of frustration while I made phone calls, sent email and met with the WDNR regional trail manager, the City of Milwaukee Engineer, the Commissioner of the Milwaukee Department of Public Works and even the head of Milwaukee DPW Bridge Maintenance because they maintain the bridges on Canal Street.

Truth be told, I’ve been talking to these folks about winter maintenance of the Hank Aaron State Trail for a couple years. The trail functions as a sidewalk along Canal Street, so by city ordinance it should be cleared of snow and ice, just like any other walkway. Most of the Canal Street property owners along Canal do a pretty good job of clearing the trail, but large segments of the trail have no adjacent private property owners and so the task fell to the State since it is their trail. Unfortunately, the WDNR has never had a budget for winter maintenance, even though they signed a Memorandum of Understanding that they would plow it. 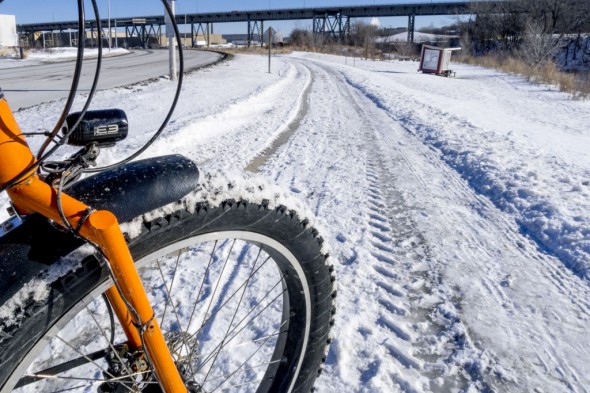 Not bare pavement, but thanks to the City of Milwaukee, you can ride the Hank Aaron State Trail again on a mountain bike or fatbike. It is a big improvement over last year.

I pointed out that the city maintains the bridges at 6th Street, 32nd Street and at the Menomonee Valley Passage and they have several properties on the trail. I suggested they keep the plow blade down from 6th to Selig Drive rather than just do the segments on the bridges and by their properties. The city resisted, given that it’s the state’s trail, the state’s responsibility, and there would be real additional costs incurred.

Eventually I filed a formal online service request to get the trail plowed, just as I would do if a neighbor or a business refused to shovel their walk. The city has a policy that they give a warning, and if the property owner still does not clear the walk, city crews plow the walk and bill the property owner.  Because I filed the report, a crew was sent out to clear the trail; they even called me to figure out what kind of equipment they would need.

Following that, there was a meeting between key staff from the Milwaukee DPW and the WDNR Trail Manager, Melissa Cook. I called Melissa to see how the meeting went and she said it went wonderfully. In fact, the city has agreed to plow the segments of the trail up to the Menomonee Valley Passage and even to Selig Drive after the packed down ice melts. While this is a temporary and partial solution,  the trail is now rideable, so I am pedaling to the Winter Farmers Market again! 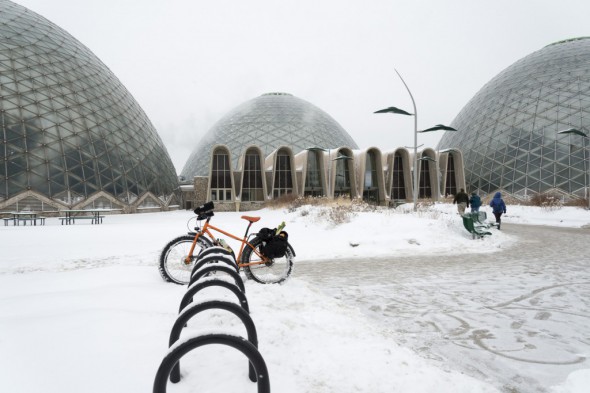 Plenty of free parking at the Winter Farmers Market, though it could be shoveled a bit better. 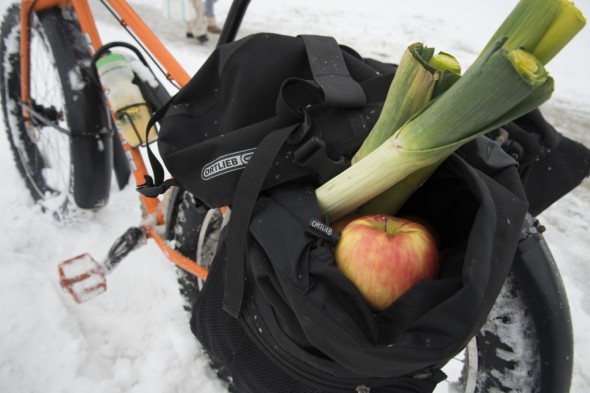 To market to market to buy some fresh locally grown leeks, apples (carrots, potatoes and onions not pictured).

I would like to thank the folks at DPW, the WDNR and Milwaukee County Parks. I talked to the Parks Department about improving winter maintenance of the Oak Leaf Trail. Even given our tough winter this year, I can testify that the county has done a much better job of plowing the sections of the Oak Leaf that are most heavily used. Three cheers and many thanks to all the government agencies involved.