More progress -- and more tips for bikers -- in my eternal quest for the perfect winter bike.

By Dave Schlabowske, Bike Federation of Wisconsin - Jan 24th, 2014 11:02 am
Get a daily rundown of the top stories on Urban Milwaukee 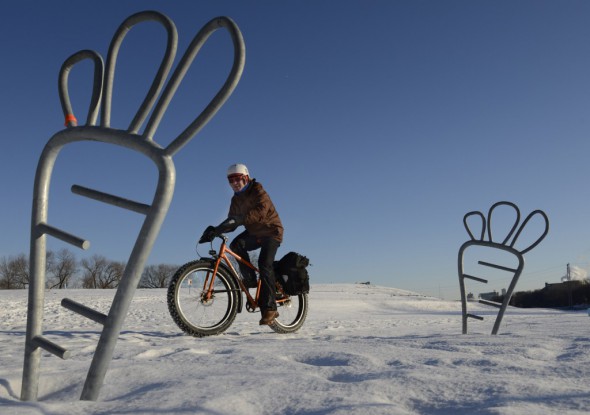 In my eternal quest to create the ultimate winter commuter bike, I have added full coverage fenders and modified the rear rack I built for my Schlick Northpaw. Regular readers may remember a past post describing how I built a very minimal rack in a couple of hours in my basement. I left it bare metal so I could modify it. After riding it for a while, I decided it needed additional tubing to keep the panniers from flexing into the rear tire. The photo below shows how my first attempt at the rack looked. 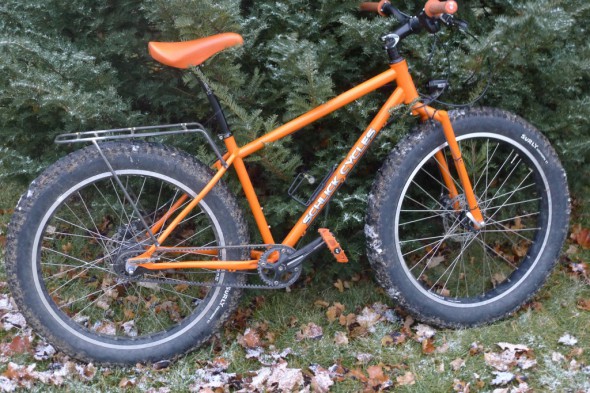 Phase one of the rack only had a single vertical stay on each side. I found that my panniers moved around enough while riding to hit the rear tire.

To fix the rack problem, I heated up the joint at the top of the stay, cut the stays down, mitered them and brazed them back in a more plumb position. Then I bent matching rear tube and brazed them in position. I brazed in some fender mounts at the lower corners and under one of the top cross braces on the rack so I could attach the rear fender stays to the rack rather than at the braze-ons near the rear dropouts. 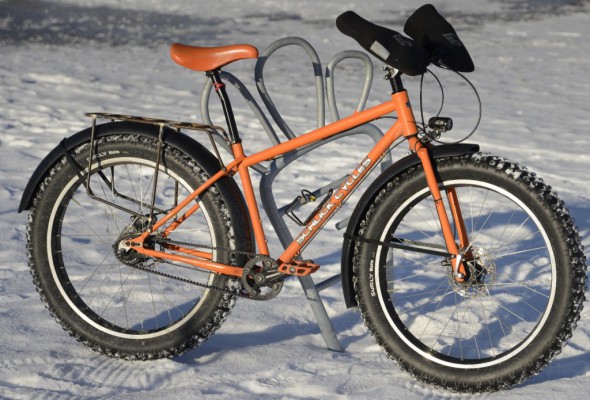 I bought the fenders for $108 from Big O Manufacturing out of Minneapolis. The only modifications I had to make to install the front fender was to notch out two spots so I could pull the fenders up higher on my near the fork crown. The rear fender took a bit more work. First, I had to replace my 113 Gates Center Track belt with a 115 to move the tire back 11 millimeters so I had enough clearance for the fenders at the bridge on the chain stays. Then I had to grind away some of the brake bridge up near the top of the seat stays to add clearance there. If you think you are thinking of ordering a Schlick Northpaw and you might want to add fenders, just tell them and they can build the bike with the bridges so you have the clearance. I didn’t think about that when I ordered mine, doh! 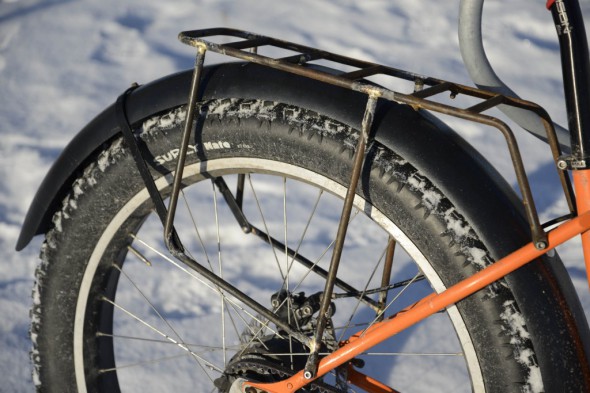 The next rack I build will be about a half inch taller to give a bit more clearance. 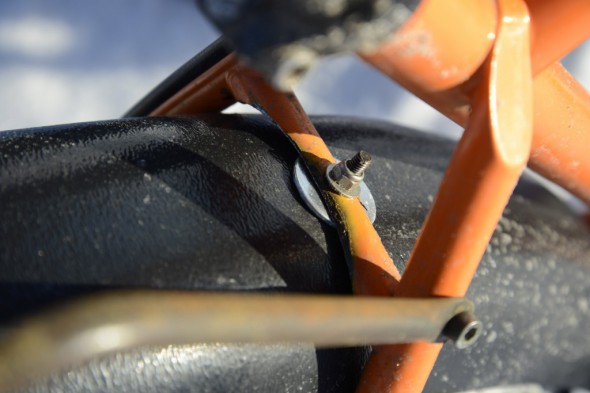 You can see where I had to grind away an arch in the brake bridge. If you order a Northpaw, just ask that they build the bike with room for fenders. They can use a thinner curved bridge so you don’t have to pull out an angle grinder like I did.

You can see the rack remains unpainted. I want to ride it a little longer to make sure I have it right before I ask my West Side pal Jason from Sanchez Paintshop to paint the rack and stay where I ground away the tubing. Since he has to touch up the frame orange anyway, I thought maybe I might have him pain the rack orange too. What about the fenders?  Should I leave them black or keep the orange flowing?

One thought on “Bike Czar: The Ultimate Winter Commuter Bike”