The War Against Wind

Wind power is booming in surrounding states but declining in Wisconsin. Why?

Across the nation we are seeing a boom in the growth of wind power. According to Wind on the Wires, an advocacy group for the industry, in 2012 seven percent of the entire world market of wind energy was developed in America’s upper Midwest, but 99.4 percent of this development occurred outside Wisconsin.

“The climate in this state is perceived as very unfriendly by wind developers and they’re just not trying to develop here as a result,” says Katie Nikola, general counsel for the non-profit Clean Wisconsin.

The potential benefits for Wisconsin from wind power are enormous. The state spends an estimated $12 billion annually to other states to purchase coal and other fossil fuels, all produced in other states. By contrast, wind power can be produced in this state by local companies. Data from the American Wind Energy Association (AWEA) shows that Wisconsin ranks 19th among the states in number of wind-related jobs and has 28 wind-related manufacturing facilities. 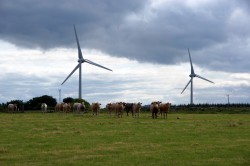 But the industry came to a standstill after Republicans took over the legislature and Gov. Scott Walker took office.

The problem isn’t a lack of wind in Wisconsin. While it ranks far behind wind powerhouses like Texas or Kansas, Wisconsin ranks 17th highest in wind power potential, according to the AWEA, with enough wind power to produce four times more total energy than the state’s current electrical needs.

Nor is the problem one of cost. Lazard, the world’s leading financial advisory and asset management firm, estimates that wind power now is slightly cheaper to produce than coal and even natural gas.

Wisconsin, the nation’s second leading state for manufacturing, should be a leader in this field. According to Wind on the Wires, 22 facilities in Wisconsin manufacture components for wind energy industry. As Forward Wisconsin has noted, “Wisconsin’s decades of experience in precision manufacturing gives the state’s manufacturers a competitive advantage in supplying the various 8,000 components that comprise a wind turbine.”

But instead of leading the way in wind, Wisconsin is falling behind. Data from Wind on the Wires shows that in 2012, Illinois added 823 megawatts of wind power, Iowa added 814, Michigan 611, Minnesota 267 and Indiana 203. Wisconsin’s total? Zero.

Minnesota and Illinois have both set a 25 percent renewable standard for utilities by 2025, while Wisconsin remains at 10 percent, under a rule change adopted under Democratic Gov. Jim Doyle.

Beyond the economic benefits of building the state’s wind industry are the obvious health benefits. Currently 63 percent of electrical power in Wisconsin comes from coal. The state burns about 25 million tons of coal every year in Wisconsin, all imported at a cost of about $1 billion dollars annually.

According to Clean Wisconsin, coal accounts for the vast majority of air pollution in our state. In 2010, it estimates, coal power plants were responsible for 86 percent of sulfur dioxide and 77 percent of nitrogen dioxide emissions from the electric power industry. Pollution from Wisconsin coal plants is estimated to contribute to 268 deaths, 201 hospital admissions and 456 heart attacks each year.

The National Resources Defense Council rates Wisconsin as the 18th most toxic state for air pollution from power plants. Mercury emissions from coal plants are suspected of contaminating more than 200 lakes and rivers in Wisconsin.

The AWEA estimates that the wind power already installed in Wisconsin “will avoid over 1 million metric tons of carbon dioxide emissions annually.”

In 2010, industry representatives and other groups worked together in Wisconsin to create uniform rules for wind power based on best practices nationally. But “one of the first things Walker did was to suspend those rules for 12 months,” notes Tyler Huebner, executive director of Renew Wisconsin, a non-profit that works with companies to advocate for renewable energy. “What happened then was these companies basically said, ‘okay we don’t have problems in other states, so let’s develop there.’”

Under Walker, the state also reduced incentives for alternative energies under the Focus on Energy program.

Walker had suggested he had concerns over local control of where wind turbines were located but agreed in 2012 to end the suspension of the state-wide rules. But then came efforts by Republican legislators like state Sen. Frank Lasee (R-DePere) to pass a bill that would allow any residents living within 1.5 miles of a wind turbine to sue for alleged negative impact on their health and property values and to have their legal bill automatically paid for by the wind farm owner or operator.

Chris Kunkle, a lobbyist for the wind industry, noted to the Cap Times that the Republican-controlled legislature has been pushing for tort reform to reduce the impact of suits on numerous other industries while making suits more likely against the wind industry by awarding attorney’s fees and removing an existing $500 cap. “This bill is wildly hypocritical,” Kunkle charged. “Lawmakers say they are trying to improve the business climate in the state, yet they are picking one industry and creating a new set of legal standards.”

Wind industry proponents point to studies showing no negative impact on health of residents near wind farms and no lowering of property values. Legislators like Lasee, however, say they are acting of behalf of constituents who complain about the noise and believe it affects their health. Nikoly, however, contends these local complaints only occur after wind opponents from other states “rile people up in opposition…Somebody must be paying the travel expense for these opponents.”

Meanwhile the deadly impact of coal on states like Wisconsin has been profusely documented, “yet you can’t sue a coal plant because of the health impact,” notes Huebner.

At the recent Renew Wisconsin Energy Summit, one presenter summarized the view of wind industry companies regarding Wisconsin as a place to do business. The comments included:

-“PSC and DNR regulators are incredibly hard to work with.”

-“Development climate is awful, experience of past projects is scary.”

-“Politics: every time the legislature is in session we hear about how awful wind is. Fine we hear you — we will take our business to Illinois.”

This is one industry, it appears, where Wisconsin is not “open for business.”

54 thoughts on “Murphy’s Law: The War Against Wind”