Bohl is under investigation and has lawyered up. But his home is awfully cozy. 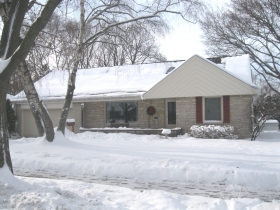 This 1951 vintage home lies on the convoluted western border of the City of Milwaukee, which acquired the domain from the defenseless Town of Wauwatosa between 1941 and 1950 during a period of great expansion. The street name alone — N. Colonial Drive — conveys the suburban aspirations of the early automotive era, as do the curvy streets and attached garages common here.

This must make canvassing for votes in a municipal election a particularly difficult task, since all of the homes look like they belong in a suburb anyway, including this House Confidential home of the week, belonging to our honoree Ald. James A. Bohl, Jr., who represents the 5th Aldermanic District on the Milwaukee Common Council.

Colonial Highlands, the subdivision where this home is located, was platted in 1930 just about the time that Mount Mary College had built its countryside campus, and when the Menomonee River Parkway, just two blocks to the west, was being paved from Burleigh to Hwy 100. Even by that time the city limits had already begun to creep toward this location in an incremental fashion.

This “highly restricted development in the City of Milwaukee and the Town of Wauwatosa,” was advertised as the “Perfect Place to Live and Invest,” by the developer, Burleigh Realty Company. The restrictions dictated the use of the properties (single family) and made other requirements as to building size, cost, and even landscaping. [See “The Law of Restrictions on Land in Wisconsin” in the Marquette Law Review, Winter, 1957-1958, for a discussion including Colonial Highlands.]

“Think of what it will be later. And remember that the city limits run through Colonial Highlands,” the ad continues.

Well, here it is later, and the Bohl residence is old enough to collect Social Security or to receive a historic building designation, if things should ever come to that.

The home has a Lannon Stone facade that shows some of the characteristics of the work of Olaf A. Olson, a Mequon stonemason who was active at that time, and in that area.

The one-story residence has a full 1,329 square foot basement with a rec room where the owner can let off a little bit of the steam that builds up after a long day of committee hearings and sweating out those interrogations by the District Attorney.

The first floor has 1,609 square feet of living space, and there is a 715 square foot attic above. Altogether the home has three bedrooms and two full baths, along with a “walk-thru den.” The attached garage, which leads directly into the home without the benefit of a “breezeway,” is 450 square feet and has an automatic door opener, one of the few improvements made to the dwelling over the years. Why meddle with perfection?

Another improvement is in the matter of heating. The home was originally equipped with a 275-gallon basement oil tank which fed the warm air furnace to keep original owner Ken Loeper and family comfy. The oil burner was replaced in 1975 by then-owner Mrs. Robert Ernst, and it was not until 1997 that a Lennox G26Q ¾ – 100 gas fired furnace was installed, at a cost of $3,840 by owner Juvencio Esparza, who later sold the home to the Bohls.

There has been little in the way of additions to the home, not that there is much room for them on a 67’ x 130’ lot, what with all of those restrictions, but a 280 square foot sunroom — about the size of a master bedroom closet in Mequon — was added in 1999, increasing the living space by nearly 14 per cent.

In 1988, owner Ernst objected to the tax assessment on the home. “You assessed the neighborhood, not the house!” was the complaint entered in the official record. (Aldermen hear stuff like this all the time.)

The assessor prevailed, noting the “additional attic development and basement rec. room,” which were unknown to him until then. “Comparable sales sustain the assessment.”

About James A. Bohl, Jr.

James A. Bohl, Jr. began his 4th term as Milwaukee’s 5th District Alderman in 2012, after joining the Common Council in 2000 at age 30. He is a graduate of Milwaukee’s Madison High School, and received a Bachelor’s and Master’s degrees from Marquette University. He once served as an aide to Rep. Tom Barrett, now the mayor.

Bohl was an organizer of his neighborhood’s block watch, and is active in community safety. He likes things orderly, and is opposed to the proliferation of check cashing and payday loan stores, extended hour facilities and other affronts to the public weal.

He served at one time as Chair of the License Committee, which was known during his tenure for its very lengthy meetings as Bohl patiently and repeatedly called for order and laid down the law.

On his website, he invites residents to “Help Track Tax-Exempt Properties” in his district since he feels there is  “a small percentage which takes advantage of the system (by breaking the law) and leaves law-abiding property owners with the bill.” No phony storefront churches here!

Bohl also alerts his constituents to “Flouride: The Poison in Our Water.” He tried without success to get the city to end its use of fluoride, noting that it leads to “fluoride overdose symptoms such as dental fluorosis (yellowing, brown, white spotting or pitted teeth).”

Indeed, no matter is too small for Bohl’s attention it seems, and this may land him in trouble. Bohl’s zeal tends toward the overzealous; his vigilance borders on the vigilante.

Thus he has found himself in the unfortunate position of having to respond to an investigation of possible coercion of a district property owner.

Bohl, you see, does not favor having sex offenders living in his district. In fact, he once sponsored legislation that would have limited the places where released offenders could live to just a couple blocks in the city. None were on N. Colonial Drive, you can be sure.

So when he found out that property owner Jeff Stockinger had legally leased a home at 3231 N. 77th St., in Bohl’s district, to the state to house released offender Robert M. Fowler and another sex offender under civil confinement after the end of their prison terms, Bohl allegedly used extra-legal means to persuade Stockinger to evict his tenant and the other offender.

Stockinger’s firm, A&J Properties, was hit with a number of building violations for the residence and eight other properties owned by the company, which may give the appearance of selective enforcement. According to news reports on the matter, which is still under investigation, Stockinger was told that the orders would be “magically lost” if he were to evict the tenants, and terminate the lease with the state. Bohl is represented by Atty. Michael Maistelman, who was often on the other side (and often victorious) when Bohl chaired the License Committee. 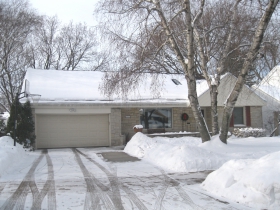