"We could learn from the Las Vegas Downtown Project... It’s basically city planning, urban development, and community design on steroids." 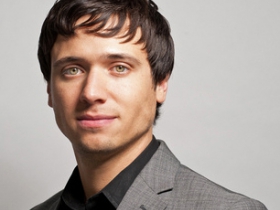 What is your job and its responsibilities?
As the recently-named president of Milwaukee-based cloud commerce provider Okanjo, my responsibilities include everything from product management and business development to late night pizza runs for our developers. Sometimes, the most effective way to keep our aggressive product release schedules on track is to simply buckle down and pull a good old-fashioned all-nighter!

Was there a point where you decided this was the city you wanted to live in?
I’ve lived in or near Milwaukee all my life, but there was definitely a time when I was looking for opportunity elsewhere. The moment I decided this was a city I wanted to live, work, and play in was when I realized that there was a thriving group of Milwaukeeans dedicated to innovating in and improving our already great city. Groups like NEWaukee, the Greater Milwaukee Committee, and meetups like the ones Spreenkler used to have connected me with like-minded young professionals, motivated to make big things happen together. That energy was what hooked me, and is why I’m building things and living in this great city.

What strikes you as the most unique thing about Milwaukee?
I find myself saying “Smallwaukee” a lot, but I mean that in the most positive way. Milwaukee has big city conveniences: Thriving nightlife any night of the week, 24/7 restaurants and coworking spaces, and more. My office in the Third Ward is minutes away from major expressways, rail, air, and water transportation. We have one of the best Thai restaurant per capita ratios found outside of Thailand – an important stat for a capsaicin addict like myself.

But something you get with Milwaukee that you don’t find as easily in other top 40 metro areas is an incredible sense of community and connectedness. The rest of the world has Kevin Bacon’s six degrees of separation – in Milwaukee, its about one and a half degrees, and can be a very good thing if you’re trying to rally a community toward a positive common goal.

What is your favorite Milwaukee building?
The Milwaukee Gas Light building holds fond memories for me as a kid. I remember heading down to the lakefront for the Fourth of July fireworks and being fascinated by its massive flame, and trying to figure out (without asking of course) what the colors meant. They recently replaced all the lighting and its even brighter than it used to be. It also resembles 30 rock in New York, in the same Art Deco style. This past summer I was lucky enough to be able to climb up top and see the city from the catwalk around the flame – quite a treat!

What have you seen in other cities that you’d like to see in Milwaukee?
I’ve had the opportunity to visit the downtown Las Vegas recently, and the work that Catalyst Creative and the Downtown Project are doing there is nothing short of amazing. It’s basically city planning, urban development, and community design happening in fast forward and on steroids. We’re fortunate in that Milwaukee has a very strong downtown community, but we could learn from some of what the Downtown Project is doing.

Specifically, I’d love to see more initiatives around density, collisions, walkability, and collaborative spaces. We’re so close to this critical mass of creativity and innovation that will herald an explosive renaissance Downtown, and I believe with just a bit more energy and resources dedicated to the right initiatives, all Milwaukeeans will reap the benefits.