Thanks to the 2010 redistricting, Milwaukee County has been apportioned among four separate congressional seats. We have Democrat Gwen Moore representing the greater area of the county, including the city. Former Republican Vice Presidential candidate Paul Ryan has a chunk of the southwest portion of the county. Republican Rep. Jim Sensenbrenner has some western parts of the county, but sacrificed his longtime constituency in the Village of River Hills, which is now represented by Republican Tom Petri, a Republican from Fond du Lac. [This came as a surprise to some voters in River Hills, who wondered what the heck happened to University School of Milwaukee alum Sensenbrenner at the last election when they showed up to vote.]

Petri hasn’t worked the district much, not that there is much to work in River Hills unless he wants to sing carols outside the Milwaukee Country Club, nor has he been seen much in the Ozaukee County city of Mequon, which he also inherited from Sensenbrenner.

Petri (pronounced PEE-try], like Sensenbrenner, is one of those congressmen who raised their families in the District of Columbia area rather than their home districts. Petri’s daughter, Alexandra Petri, 26, who grew up in Georgetown, is a columnist for the Washington Post, where she writes the brilliantly funny ComPost column. [“Alexandra Petri puts the ‘pun’ in punditry,” is the slogan.]

A recent offering on December 13th, 2013 was a hilarious take-off on a Wall Street Journal article recommending “spousal reviews” as a cornerstone of a happy marriage.

Petri also wrote a takedown of “Affluenza,” a societal condition in which wealth can be used to explain aberrant or outrageous behavior. It was successfully used as a defense to spare a Texas teen from jail time for killing four people in a drunken traffic accident. [“The Affluenza Defense“].

“Until this week I had never heard of Affluenza,” she wrote this week on December 12th, 2013.

The term was first heard around these parts in 1996 when Marie Kohler wrote an article about Jessie O’Neill, a River Hills resident and granddaughter of Charles Ervin Wilson, a president of General Motors [known for the comment, “What’s good for General Motors is good for the country,”] and a cabinet member in the Eisenhower administration. [Kohler’s grandfather Walter Kohler was president of Kohler Company and Governor of Wisconsin.]

Now living in Delray Beach, Florida, where she runs an art gallery (one hell of a place and quite a way to escape affluence) and operates what she calls the Affluenza Project, O’Neill wrote a book called the “Golden Ghetto: The Psychology of Affluence.”

I called O’Neill and asked what she thought of the use of the affluenza defense.

“I do not think affluenza is a primary defense in a case of homicide,” she said, adding that she had been “called out of retirement” by recent events, having recently been interviewed by CNN and other media outlets.

“The defendant was sentenced to a $450,000 per year treatment center. It could have been a lengthy prison sentence. I don’t know if either is appropriate in this case.”

As Petri lamented in her column, “All this about affluenza leaves me with one question: How do you catch it?”

If she hasn’t yet caught the disease, there is ample evidence that Ms. Petri, an only child, is a carrier: 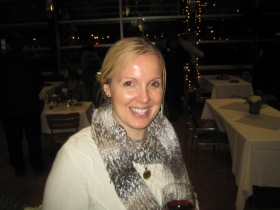 The Historic Third Ward Association held a party at its Milwaukee Public Market Monday, December 16th, where members enjoyed treats from many of the market’s vendors, including Aladdin, Sushi-A-Go-Go, C. Adam’s Bakery, West Allis Cheese and Sausage Shoppe and others, including the Spice House, which offered little gift packs of cinnamon and nutmeg as a party favor.

Among the attendees were Mike Toffler of the Chocolate Factory, market facility manager David Ware (who lives in an 1860s log cabin in Ozaukee County), market operations manager Paul Schwartz and the lovely Miss Lee, who keeps the place shining in many ways just by walking in the door. Nancy O’Keefe, the director of the Historic Third Ward was also there. BID board president Ron San Felippo, who is credited with turning the market around after its first few slow years, was there, introducing folks to Carolynn Gellings, who the project manager for the Hoan Bridge reconstruction project, which commenced that day. 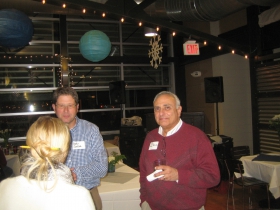 Kendall Breunig of Sunset Investors, a Third Ward board member, was there chatting with architect / professor Matt Jarosz in the party room of the market. Bob Gosse, the Director of Design and Construction for Milwaukee World Festivals also attended. Former Milwaukee County Supervisor Fred Tabak and former colleague Sheila Aldrich, a Third Ward resident, also joined in the festivities, which were considerably augmented by the vocal stylings of John Schneider, belting out classics from the American songbook, while free wine poured for the guests.
The hall was nicely decorated for the season. The annual installation of Gingerbread houses made by MATC culinary students was a standout as usual. (Add this to the list of Milwaukee holiday traditions.)

Photos from the Party 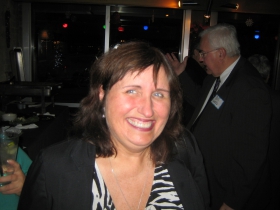 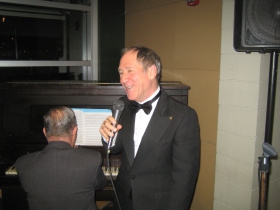 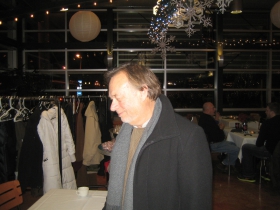 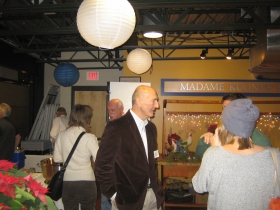 8-Pointed Snowflakes to be Banished from the Market

The Milwaukee Public Market was decorated with a large and attractively lit tree along with other festive elements. Dozens of “snowflakes” hung from the ceiling, most of them appropriately 6-pointed (or 6-sided). However, a number of 8-pointed snowflakes were also detected by this reporter, who immediately brought them to the attention of Dave Ware, as if he has nothing else to do. Ware promised he would take a scissors to the offending flakes the next day. He is a man of his word. [The best excuse for 8-pointed snowflakes yet heard is “they come from China,” as if H2O has a different crystalline structure in the eastern hemisphere.] The Milwaukee Journal Sentinel, after years of complaints from this writer, continues to use a 4-pointed snowflake in its weather graphic. This is an offense to the intelligence of its readers and an outrage to the molecular structure of snow.