Will Allen and Growing Power celebrate two decades an an international leader in the field.

By Maria Corpus, Milwaukee Neighborhood News Service - Dec 16th, 2013 09:01 am
Get a daily rundown of the top stories on Urban Milwaukee 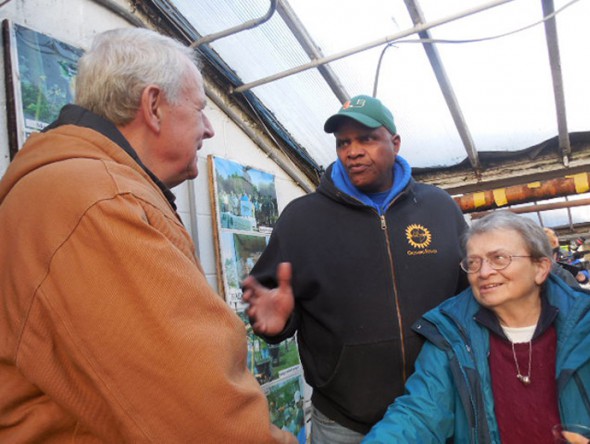 In 1993, Will Allen purchased the city of Milwaukee’s last remaining farm with the idea of selling his produce. Twenty years later, the farmer from Oak Creek, Wis., celebrated Growing Power’s success as the leader in the “good food revolution.”

With more than 20 farms, 25 acres of year-round production and 300 acres of outdoor production, Growing Power is a model for urban farming and good food communities all over the world.

The organization works to provide equal access to healthy, high-quality, safe and affordable food by helping others build food systems such as Growing Power’s at 5500 W. Silver Spring Drive.

“What we have is a concrete example of what a small-scale farm can look like anywhere in the world in an urban setting or even in a rural town,” said Allen, the founder and CEO of Growing Power. 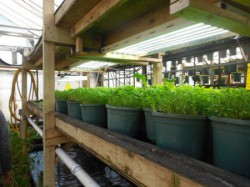 Growing Power grows cilantro in one of its six traditional greenhouses. (Photo by Maria Corpus)

Individuals from Sweden and Latvia — and from Alaska to Florida — have visited Growing Power to learn how to implement a similar model in their communities and cities, said Communications and Media Relations Manager Tami Hughes.

“A fundamental part of Growing Power is training others to do what we do so that we’re not just about good food in Milwaukee, we’re about the good food revolution,” Hughes added.

Mayor Tom Barrett said the organization has been a great partner to the city of Milwaukee. “It’s an organization that really engages the community, improves the quality of life, improves nutritional output and, for a lot of people, really provides some meaning in their life.”

There are kids in Milwaukee who do not have access to fresh food and don’t know how wonderful a vegetable picked right off the vine can taste, Hughes said.

Senator Lena Taylor said Growing Power is about self-sufficiency, sustainability and food that does not have to go very far.

The organization’s impact is felt beyond Milwaukee, “not just to the 4th Senate District, not just to the state of Wisconsin, but really around the world,” added Taylor.

For Allen, the last 20 years have been a long journey filled with challenges. He said many people were skeptical about being able to grow enough food in an urban community. Thanks to the community’s effort and engagement, Growing Power continues to work and grow healthy and accessible food, he added.

The organization is currently working to raise funds for its vertical farms project, which would allow planting on tiered levels to increase food production.

“This is really about social justice, to make sure everybody has access to good food,” Allen noted.

2 thoughts on “20 Years of Urban Farming”