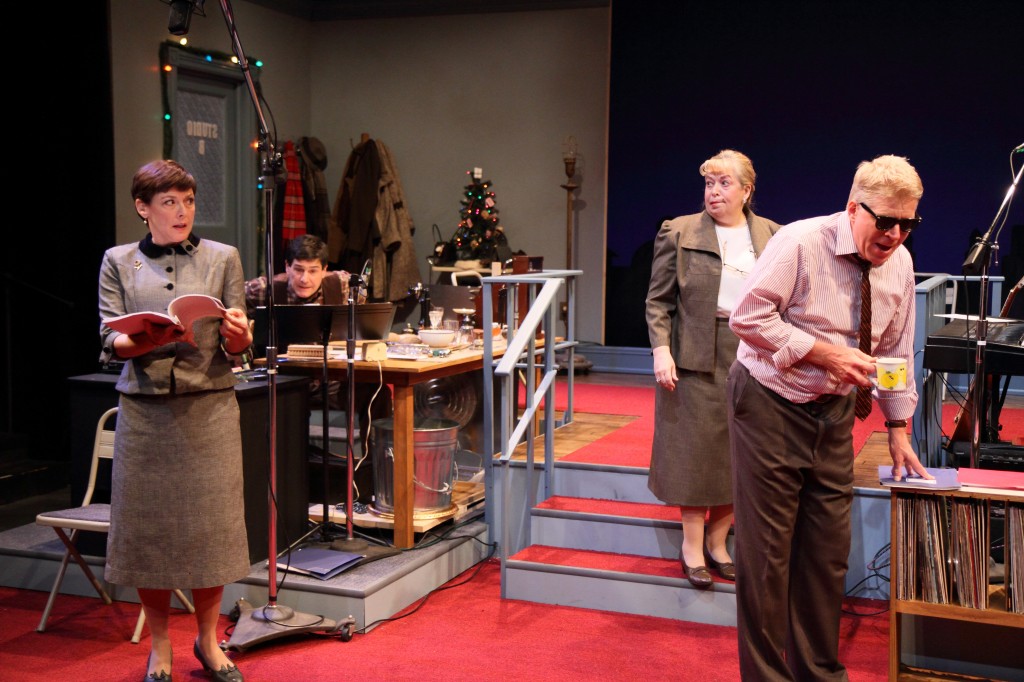 Next Act will remount “It’s A Wonderful Life Live Radio Show” this year, an adaptation of the classic movie framed around performers doing their last radio drama. Photo credit

Next Act will remount “It’s A Wonderful Life Live Radio Show” this year, an adaptation of the classic movie framed around performers doing their last radio drama.

When an arts company puts together a holiday show that works, they usually like to make a habit of it. Cases in point: The Milwaukee Rep is celebrating its 38th consecutive year of Christmas Carol performances; In Tandem just started staging A Cudahy Caroler Christmas again after a few years off gave its patrons the holiday blues; and the MSO and Milwaukee Ballet both have their quintessential pieces on tap – Handel’s Messiah on one hand and Tchaikovsky’s Nutcracker on the other.

Last year, Next Act Theatre put together a holiday show that worked. It’s A Wonderful Life Live Radio Show, an adaptation of the classic film by Frank Capra, took off at Next Act’s Walker’s Point venue, selling out both of its last two weekends. With a response like that, says artistic director David Cecsarini, the company couldn’t pass up the chance to bring this unique show back to Milwaukee audiences.

Part of the appeal in Mary MacDonald Kerr’s adaptation is that it’s not a straight staging of the film. Instead, MacDonald Kerr opens with a frame story that sets the play in Milwaukee circa 1957, at a radio station about to transition from a radio-drama-friendly format to an all-music style. As those performers prepare for their last show, their director announces  they’ll be performing It’s A Wonderful Life instead of A Christmas Carol, and as they scramble to get ready, a former company member (MacDonald Kerr herself) drops in and gets drafted, her complicated history with the other performers notwithstanding.

The fun comes when the Venn diagram overlaps, and the actors begin telling the Wonderful Life story – effectively, becoming actors in front of a live audience pretending to be actors doing a radio show in an audience-less studio. MacDonald Kerr says making such a premise visually interesting took some time to get right in rehearsal (for example, a real radio drama actor might not gesture or look at their scene partners, but these actors should), but Cecsarini says they made it work by showtime. “The play’s not static,” he says. “That’s one thing I was concerned about. … With a little technique on our part, plus the in-studio story, there’s a lot of interesting things there.”

MacDonald Kerr’s version got its start thanks to a different adaptation – one she didn’t much like. A few years ago, she says, she was among people Cecsarini showed one adaptation of It’s a Wonderful Life to, which cut many parts of the story and wasn’t as fleshed out as she, a devoted Wonderful Life-lover, felt a staged version should be. “I’m bananas about the movie,” she says. “I was really struck by how real and serious it was for a Christmas story.”

She says she’s tweaked the script slightly for this remount, making the play’s backstory a bit more direct and changing up some of the commercials that get sprinkled throughout the radio play. They’ve also changed the opening sequence. Last year, Cecsarini, in his role as the show’s Foley artist, created an improvised soundscape that never quite felt like an introduction. Instead, they’ll have three of the play’s characters perform an interlocked mashup of three different Christmas songs, a direct response to the audience’s enjoyment of musical numbers in the previous staging. “When we sang, people just brightened up in the audience,” Cecsarini says.

Cecsarini isn’t sure yet if Next Act will actually make this adaptation a regular event; he’s waiting to see how audiences respond to the revised version. That means whether or not Bedford Falls crackles across the radio waves again depends largely on whether or not lightning strikes this year – all the more reason to hedge your bets and see it this time around.

PREVIEW: The Nutcracker, at the Milwaukee Ballet

Okay, yes, technically, ballet is not theater. But if you’re the sort of person who digs theatricality, I bet you’ll dig The Nutcracker as presented by the Ballet’s AD Michael Pink, who’s made a career out of ballets that tell great stories. And this Milwaukee holiday tradition certainly qualifies as a great story, telling the tale of a brother and sister who find themselves in a wintery wonderland. Oh, and the dancing is incredible. The Milwaukee Ballet will perform The Nutcracker, with a rotating cast, 14 times this year, from Dec. 14 to Dec. 27. All shows are at 1:30 p.m. or 7:30 p.m., and tickets range from $32 to $79. To order, call (414) 902-2103 or visit the Milwaukee Ballet box office.

REVIEW: A Christmas Carol, at the Milwaukee Rep

I’ve never had a family tradition of going to see this perennial Rep favorite, but I think I’m going to have to start. I caught my third Rep Christmas Carol Sunday afternoon, and was by-and-large as charmed by director Aaron Posner’s take on the holiday chestnut this time as I was last year. My one caveat was of the careful-what-you-wish-for variety. Last time, I loved the way the Rep’s cast paid special attention to the script’s humor and added in a few nonverbal gags. On Sunday, it felt like they went too far; Christopher Donahue in particular, as Scrooge, seemed to relish his pratfalls and grouchy idiosyncrasies more than his reflection and reformation.

But the strength of the Rep’s Christmas Carol is always, always in its formidable ensemble, and they brought their A-game. Much of the main cast members were returning from previous seasons, and the new additions acquitted themselves well. Posner intimated in our interview a few weeks back that the production’s Belle and Young Scrooge (Beth Mulkerron and Michael Doherty) had brought a particular energy to their scenes together, and he was more than right to say so – the visions of Christmas Past normally drag for me, but this year Mulkerron and Doherty kept them more lively, romantic and ultimately tragic than I’ve seen before.

In short: If you’ve loved A Christmas Carol before, you’ll love it again.

Milwaukee Chamber Theatre: Things Being What They Are

Alchemist Theatre: A Kick in the Dickens