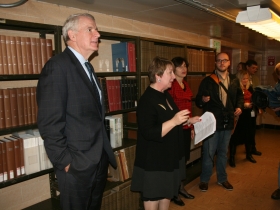 President Barack Obama issued the Better Buildings Challenge in December 2011. Part of the broader Better Buildings Initiative, the Challenge seeks to reduce energy use in buildings by 20 percent in 2020. Maria Vargas, Director of the Challenge for the U.S. Department of Energy, was in Milwaukee today to applaud the city’s efforts to save energy and reduce greenhouse gas emissions.

Milwaukee Mayor Tom Barrett has pledged to reduce energy intensity for five million square feet of city-owned buildings by 20 percent in ten years. A press conference on the initiative was held at the city’s Building Challenge-showcase, the Milwaukee Public Library’s 115-year-old Central Library. Barrett noted that he has been pushing energy efficiency in city-owned buildings for nearly his entire time as mayor. Following a executive order to department heads, Barrett boasted that energy use is down 15 percent in city-owned buildings since 2005 (and 10 percent since 2009). He also noted that over 1,500 homeowners have taken advantage of the resources made available by the Me2 program. According to Barrett, Milwaukee is also the only city that has used stimulus dollars through its Me3 program to support businesses becoming more energy efficient. It’s all about “making it a better city to live,” Barrett said. He added that the city is saving $500,000 annually through this push.

Throughout the press conference, Vargas and Barrett noted the sustainability initiative is not only good for the environment, but good for business – helping create jobs and save money. Library Director Paula Kiely said she was pleased to be saving $36,000 annually on the Central Library’s utility bills, and can instead allocate that to library resources. The Central Library was able to realize these savings by replacing and repairing steam traps, installing a green roof and solar panels, and improving the lighting. From 2010 to 2012 the 457,000 square-foot facility had a 10 percent reduction in energy use.

The event wasn’t part of some road show for the Obama administration; Vargas had come only to Milwaukee to see the efforts first-hand. She noted that Atlanta and Milwaukee are among the leaders in the initiative for having not only public, but private participation. The city is working with the Business Owners and Management Association and Milwaukee Downtown (BID #21) to utilize PACE, a program designed to help secure financing for energy efficiency improvements. In addition, private participants from beyond the city in the Building Challenge include Kohl’s and Briggs & Stratton. Responding to a question, Vargas also noted that initiative participants do so voluntarily without any direct financial assistance from the federal government.

Following the press conference, those in attendance were taken on a tour of the facility’s green features led by Office of Environmental Sustainability Deputy Director Erick Shambarger and library staff. Our photo gallery offers a detailed look at the individual components of the Central Library’s energy efficiency efforts. 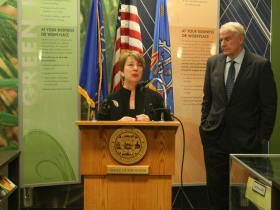 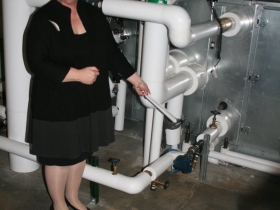 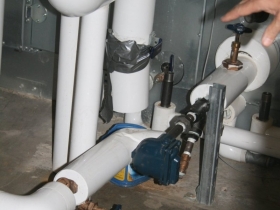 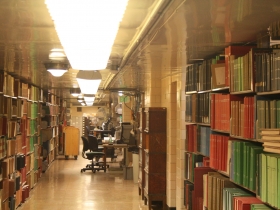 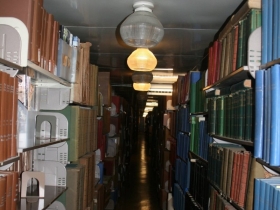