By Dave Schlabowske, Bike Federation of Wisconsin - Oct 18th, 2013 12:20 pm
Get a daily rundown of the top stories on Urban Milwaukee 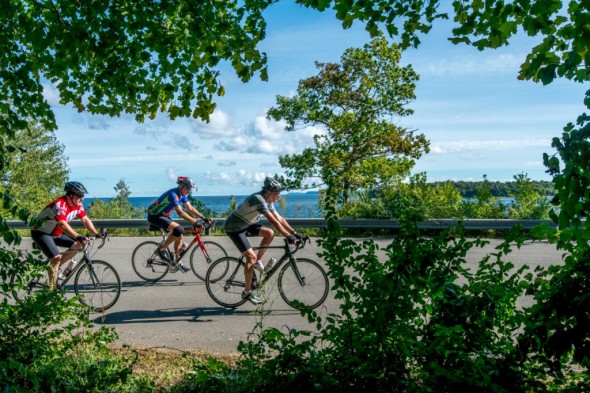 Scenic low traffic “Third Coast” roads are the bread and butter that keep people coming back to the Door County Century year after year.

When I say “Door County,” what’s the first word that pops into your head? I bet cherries tops the list, closely followed by fish boil, Peninsula State Park and maybe Chicago tourists. But to the more than 3,000 people who traveled to Sturgeon Bay the weekend after Labor Day for the 35th anniversary of the Door County Century, the venerable vacation paradise is synonymous with great bicycling. The event gives riders the chance to ride routes of 28 miles, 50 miles, 70 miles and 100 miles, all through the beautiful Door County countryside. 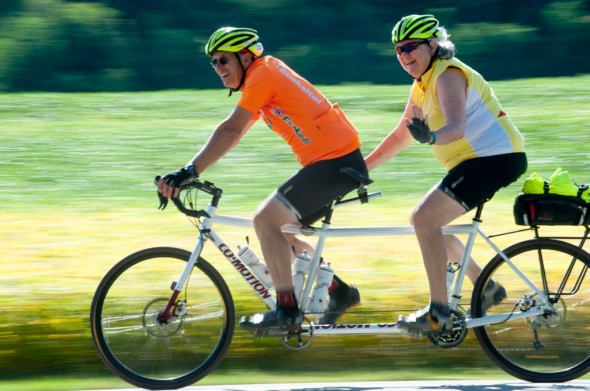 Hey to you too!

“I fell in love with this ride ten years ago,” said Barry Mainwood, a friend from Milwaukee I ran into at the post-ride Italian dinner.  “We’ve been doing it since before it moved to the Fairgrounds, which, by the way, has really changed the face of the ride, mostly because they now have beer! When the ride was in Institute at the school, everybody used to split right after the ride … and now it’s a nice party afterwards.” As he said that, the group of friends sitting at the table with Barry took a break from their spaghetti dinners and cherry pie to toast me with glasses of New Belgium Brewery’s Fat Tire Ale and Ranger IPA. 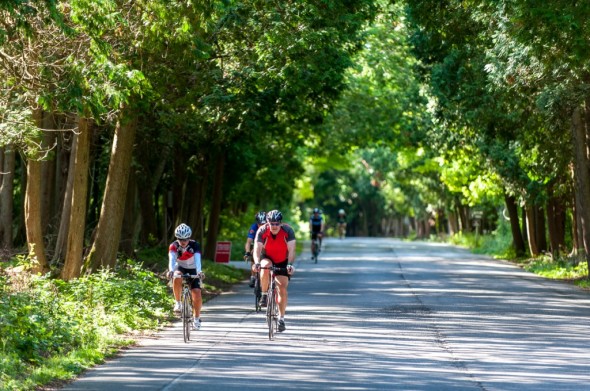 After Labor Day, the side roads in Door County are almost like bike trails, nary a car to be seen.

Just as they were doing that, Eric Resch, the owner of Stone Creek Coffee in Milwaukee, stopped for a few minutes to chat with Barry. Barry owns a video editing company in Milwaukee’s Third Ward neighborhood, very close to the Stone Creek headquarters and roasting facility.  “Plus I love the fact that Eric Resch is part owner. He’s such a great guy and a friend to the bike community,” Barry added as Eric wandered off to talk to others chowing down after their ride. 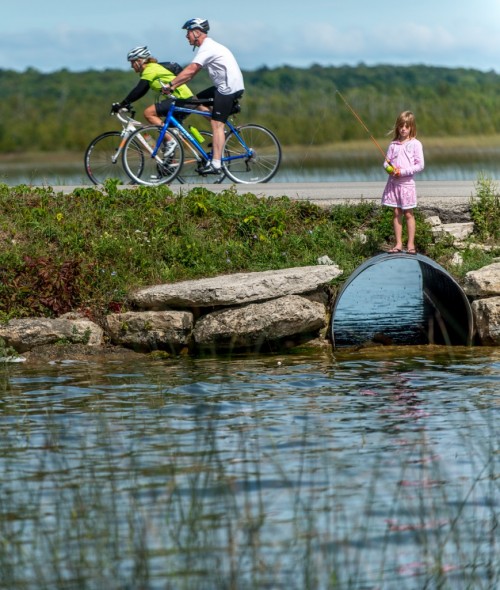 In 2008, Resch purchased the Door County Century with Dan Mahlik, a partner in start-up Geargrinder LLC, a Glendale-based cycling clothing company. The two had a vision to turn the ride into more of a weekend bicycling festival than just a one-day ride. Together with event coordinator Sean Ryan and ride organizer John Mory, they moved the ride start/finish to the Door County Fairgrounds in 2010, where the large buildings and ample parking capacity allowed them to add a bike expo area. This year was also the debut of “The Cross of the Century,” a fun, flamingo-filled cyclo-cross race held on Saturday. 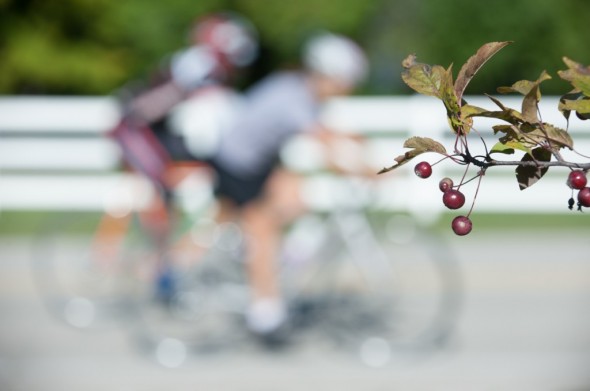 The DCC is after cherry season, but once you try a Sweetango apples you will never look at a Honeycrisp the same again.

Sunday’s Century Ride routes of 28 miles, 50 miles, 70 miles and 100 miles all start and end at the Fairgrounds and are dotted with some of the best-stocked rest stops on any organized ride I have ever cycled. Since many people get started just after 7am, the first stop is a breakfast stop that includes Stone Creek coffee (naturally), fruit, muffins, and even apple cinnamon donut holes, a traditional Door County treat. The other stops include everything from sandwiches and gluten-free wraps to cheese curds and strawberry shortcake à la mode! Hungry yet?

Since the ride takes place after Labor Day, when most of the traditional tourists have left, there is very little traffic on the well-marked scenic roads that the ride organizers chose for the routes. This makes for a great social ride where it is safe (and legal) for people to ride two abreast and chat while they take in the spectacular views. Highlights include a trip through Peninsula State Park, the causeway across Kangaroo Lake and the S-bend curves on the winding, narrow road just before White Dunes State Park.

The causeway over Kangaroo Lake

Sadly, I had to leave after Sunday’s Century, but you might want to make a week of it and bookend your trip with the new Peninsula Century held in Sister Bay the following weekend. Building on the momentum and vision of a festival of cycling in Door County, The Peninsula Century is organized by the Peninsula Pacers, the group responsible for the Door County Half Marathon & Nicolet Bay 5k and the Ride For Nature. 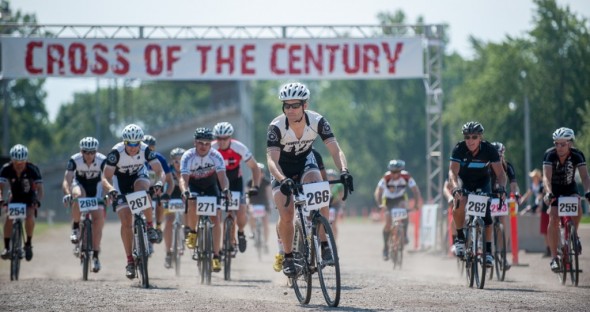 Go fast gravel at the start. 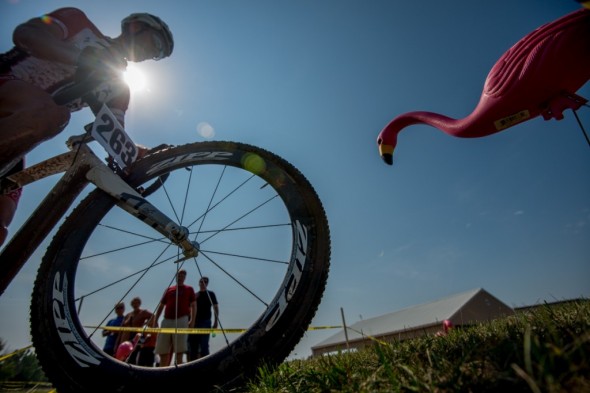 Flamingo spectators at the Cross of the Century on Saturday. 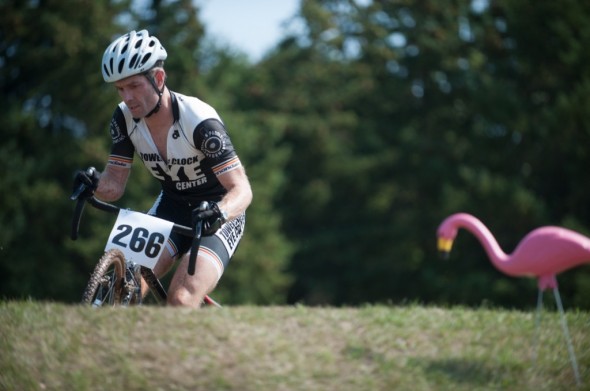 You can make it!

The Peninsula Century features routes of 25, 50, 62, and 100 miles through the rolling hills and past the incredible water views of Northern Door County with a grand roll-out start in Sister Bay from the village’s gorgeous new Waterfront Park. 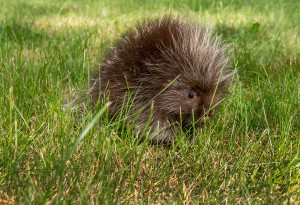 Warning from this little guy: bring a patch kit and a pump.

This new ride and the expanded festival nature of the venerable Door County Century are examples of the growing interest in bicycling in the area. The Door County Silent Sports Alliance has been bringing residents together to promote healthy recreation for a long time. The Bike Fed is working with them and other business leaders and elected officials to put the finishing touches on a county-wide bike plan which will help chart the course to make the area an even better place to ride.

I wonder if the members of the Bayshore Bicycle Club of Green Bay, who founded the Door County Century way back in 1979, knew how a simple bicycle ride could be such a positive force for good.

No matter where I travel, one of the first stops I make is at a bike shop to get some suggestions for places to ride, eat and grab a beer. On our arrival in Sturgeon Bay on Friday, Pete DiAntoni and I stopped in Nor Door Sport and Cyclery. Nor Door celebrated its 30th anniversary this year, so you can be sure they can help with anything cycling related. Address: 60 S. Madison St., Sturgeon Bay, WI 54235 Phone: (920) 818-0803 www.nordoorsports.com

Owner Brian “Stretch” Merkel was out at the Fairgrounds for the bike expo and manager Leif Hagman was manning the store. After we got some advice about good vantage points for photographs on the Century route, he said we couldn’t leave until we tried the Sweetango apples from Wood Orchard Market.

Wood Orchard Market is a third-generation Door County grower with its own stores that are stocked with every local treat you can imagine. While scouting the course, we stopped at the Egg Harbor location to get pick up a peck of Sweetangos and bulk cherries. All I can say is Lief, you were right! Sweetangos are the best apples I have ever eaten. I will never look at a Gala the same way again. Address: 112 Hwy. 42, Egg Harbor, WI 54209 Phone: (866) 763-2334 www.woodorchard.com 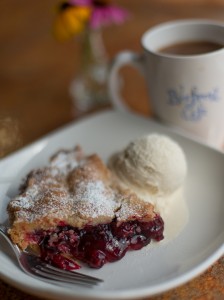 Yes, it actually tastes as good as it looks.

Pete and I can highly recommend the Bluefront Cafe. We stopped in for lunch and I had an amazing house salad with a blood orange vinaigrette, walleye tacos and washed it down with a Titletown Green 19 IPA. The flaky crust of their homemade Cherry Pie a la mode was the perfect closer. Address: 86 W. Maple St., Sturgeon Bay, WI 54235  Phone: (920) 743-9218  www.thebluefrontcafe.com

Lodging: Even though it is after the traditional tourist season, with thousands of people up for the century rides, you need to make reservations early to get a hotel room. We stayed at the friendly Tranquil Timbers Campground, a favorite spot for folks who leave their RVs up there for the season. We stayed in a comfy yurt. Address: 3668 Grondin Rd., Sturgeon Bay, WI 54235 Phone:(920) 743-7115  www.tranquiltimbers.com 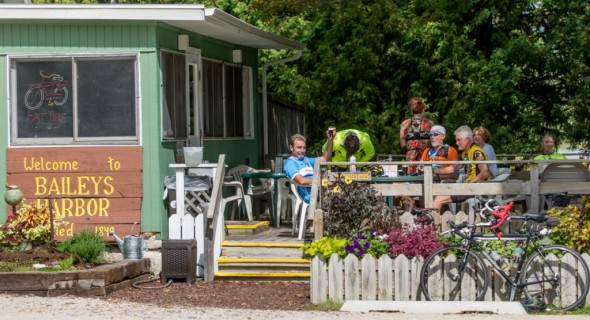 Writing this after so many weeks, my memory is a blur of great scenery, wonderful riding, great food, cold beer and lasting friendships.

One thought on “Bike Czar: Why We Love the Door County Century Ride”