The High Cost of Calatrava

Overruns on his projects are killing other cities. The impact on Milwaukee and its art museum was more positive. 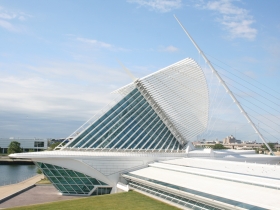 Architect Santiago Calatrava, who greatly raised this city’s international profile with his addition to the Milwaukee Art Museum, has become the scourge of the world, it seems.

A recent New York Times story offers an often amusing account of how much he is now hated in the city of Valencia, Spain.

Calatrava is the architect there for a complex called the City of Arts and Sciences. It’s “the world’s largest collection of Mr. Calatrava’s work, which includes a performance hall, a bridge, a planetarium, an opera house, a science museum, a covered walkway and acres of reflecting pools,” the Times notes. Originally budgeted at about $405 million in U.S. dollars, its cost has nearly tripled. Ignacio Blanco, a member of the provincial parliament there, has created a Web site called Calatravatelaclava, which loosely translates, the story notes, as, “Calatrava bleeds you dry.”

“Calatrava was paid approximately 94 million euros (about $127 million) for his work,” the Times reports. “How could that be, Mr. Blanco asks, when the opera house included 150 seats with obstructed views? Or when the science museum was initially built without fire escapes or elevators for the disabled?”

Other problems include the smooth skin of the opera house which “began noticeably wrinkling just six years after the building opened” and the landscaped gardens beneath metal arches “that become so hot no vines will entwine them.”

“The roof of the performance hall leaks, they say. The opera was once flooded in a storm. Didn’t he know he was working in a riverbed?”

In Bilbao, Calatrava designed a footbridge with a glass tile surface that can be lighted from below. “But in a city that gets a lot of rain and occasional snow, pedestrians keep falling on the slippery surface. City officials say some 50 citizens have injured themselves, sometimes breaking legs or hips, on the bridge since it opened in 1997.” The Times dubbed this “The Bridge of Broken Legs.”

Compared to that, the problems the Milwaukee Art Museum encountered in getting its wings — the brise soleil — to work seem relatively minor. Indeed, in the years since Calatrava did his first museum project here in Milwaukee, he seems to have steadily driven up the cost and problems of his fanciful architectural conceptions. “In numerous interviews,” the Times reports, “other architects, academics and builders say that Mr. Calatrava is amassing an unusually long list of projects marred by cost overruns, delays and litigation. It is hard to find a Calatrava project that has not been significantly over budget.” The includes the train station he is building in lower Manhattan, whose costs have risen to $4 billion, double the original estimate.

Milwaukee’s project suffered a similar fate. Its estimated cost rose from $38 million in 1997 to $122 million by the time it opened in 2001. Over the years I’ve heard that Milwaukee Art Museum board members have chastised themselves, feeling they failed in their oversight of the project.

I think that’s too harsh a judgment. For starters, as I concluded in a 2003 story for the Milwaukee Journal Sentinel, Milwaukee got a good deal from Calatrava. His fee was only $3 million, a pittance compared to the price he soon commanded world-wide. And the actual cost per square foot was $676 for the museum addition, while other American art museum and museum additions of the era ranged from $239 to $3,735 per square foot. Chris Smocke, who served as project manager for the Milwaukee project, told me it was “an absolute bargain.”

Yes, mistakes were made. Compared to Calatrava’s fee, the $6.7 million paid to David Kahler, the local architect on the project, seems questionable, all the more so when you consider that Kahler was a longtime art museum board member and thus friends with the decision-makers.

And in letting the cost of the project rise ever higher, the museum’s leaders left a big debt. Board member Sheldon Lubar led a successful effort to retire the $25 million debt a few years after the museum opened. Even so, the project’s overruns meant little money was available for an endowment to help operate and maintain the new building.

That has put a squeeze on the MAM’s expenses, requiring cuts in the curatorial staff and leaving the museum struggling to break even each year. Its annual federal tax forms show it had an annual deficit of $3.6 million in the 2011-2012 year and $4.6 million in the 2010-2011 year.

MAM Director Dan Keegan says the tax form “includes all sources of funds. So the deficit you are citing resulted from depreciation and endowment investment losses especially in 2008 and 2009.”

But those losses occurred two years earlier. For the years where these annual deficits occurred the museum reported investment gains of $3 million and $3.5 million, yet still showed a deficit.

Keegan stresses that the museum is debt-free but there’s little doubt the MAM has struggled financially since the Calatrava was built. Its budget was about $6.5 million before the addition was built, but jumped to about $15 or $16 million since, driven by the institution’s growth and added costs of maintenance and security.

Probably the biggest mistake by the museum’s leaders was in paying all this money just for an entrance hall to the MAM. The museum had long suffered from the fact that its entrance was at the back of the War Memorial, but the Calatrava addition represented an over-correction of grandiose proportions.

As critic Martin Filler put it in an analysis for the New York Review of Books, Calatrava’s “preference for bravura effect at the expense of function can also be discerned in the disparity between the Quadracci Pavilion’s extravagant superstructure, which is little more than a lobby, and the dreary exhibition galleries consigned to the concrete box beneath it like some bothersome afterthought.

Yet, if the later reviews by more influential critics ending up panning Milwaukee’s Calatrava, by then it didn’t matter, because there had already been a flood of stories — nationally and internationally — gushing about Milwaukee’s new museum addition. And of course the addition has been a big hit with tourists. The project put Milwaukee on the world map in a new way, and was perhaps the first step in this city beginning to overcome its reputation as a dreary casualty of the Rust Belt.

If the Calatrava was both an asset and liability for the museum, it was all positive in its impact on the city, providing a new image for Milwaukee, one that Visit Milwaukee quickly adopted. In this city, at least,  the name of Santiago Calatrava is still golden.

23 thoughts on “Murphy’s Law: The High Cost of Calatrava”