The End of Suburbs?

So argues a new book. And former Milwaukee Mayor John Norquist agrees. Are they right?

Milwaukee has hundreds of empty homes, a rising number of homicides, intractable joblessness, and questionable public and private school systems. Now, with the end of the residency requirement, city employees can flee the city for the suburbs. How will Milwaukee survive? Mayor Tom Barrett is wringing his hands at the city’s prospects.

Yet it is not the cities, but suburbs that are in trouble, says Leigh Gallagher, author of the new book, “The End of the Suburbs.”

Gallagher see cities growing because older suburbanites are trading in their large suburban homes for smaller city dwellings with less commuter traffic, more  restaurants and cultural offerings, and greater ethnic and racial diversity. The luster has come off the suburban lifestyle that developed after World War II, says, Gallagher, and people are rediscovering their cities. Despite all its financial woes, the city of Detroit is now growing faster than its surrounding suburbs. The same is true in other cities across the country.

But what about Milwaukee? Is Barrett right to be worried? 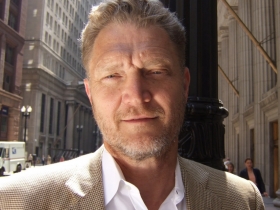 Actually, Milwaukee is about to enter into a new renaissance says John Norquist, former Milwaukee mayor and now the president and CEO of the Chicago-based Congress for New Urbanism. Norquist agrees with many of Gallagher’s conclusions.

Worried about public employees moving to the suburbs? Let them go, says Norquist.  “Milwaukee doesn’t have to be desperate about population,” he says. Baby Boomers moved to Brookfield and Pewaukee thirty years ago and built four bedroom homes with three car garages and oodles of space. Now they are empty nesters with their kids grown, and their homes have become echo chambers. They want to move to the Third Ward and the East Side with fine restaurants and entertainment all within walking distance or a short drive.

“Boomers are downsizing and who is going to buy their McMansions?” Norquist asks.

Moving to the suburbs for lower taxes? Think again, says Gallagher, who predicts property taxes in suburbs are about to skyrocket. Originally suburban taxes were lower because developers put in all the roads, sewer and water lines. But as suburban infrastructure needs replacing, each street may have only a half dozen homeowners to bear the costs. A city block may have two or three times the number of homeowners to spread the costs.

The only way suburbs can keep down taxes is to keep building and have developers open new subdivisions to spread the increasing costs. Norquist echoes Gallaher’s label that this strategy is nothing more than a giant “ponzi scheme.” When a suburb can no longer expand, the bill will come due. Add to that another problem facing suburbs like New Berlin and Waukesha, who find their local drinking water doesn’t meet acceptable standards, and may find Lake Michigan water difficult to obtain.

How about the issue of freeways? Here is where Norquist really gets rolling. After all, he tore down the Park East freeway spur when he was mayor. “Detroit is the most successful city in the world at eliminating congestion,” he says. “They have spent billions and billions of dollars doing what Scott Walker wants to do to Milwaukee.”

Norquist charges that Gov. Walker’s devotion to freeways isn’t just misguided; it’s vindictive. Walker says to Milwaukee, “We’ll show them; we’ll widen their freeways!” Norquist contends. More freeways mean people can move through cities and around cities but not into cities. “Freeways have the same effect on real estate markets in North America as the Berlin Wall had on West Berlin.”

“The best city in terms of real estate market percentage growth in North America in the last 20 years is Vancouver, British Columbia. And Vancouver has not one separated highway in the city, not even one,” says Norquist. Portland, OR built mass transit instead of freeways, he notes, and its downtown is filled with shops, department stores and fine dining.

Congestion is good, forcing goods and services to come to the people, not the other way around, he argues.  “Downtown Milwaukee has the highest value per acre of any place in the state. And run the road right through the middle of it? Silly,” says Norquist.

When it comes to business development, it’s the cities that are growing, often at the expense of suburban industrial parks, he argues. People with high tech skills “really don’t want to be in a sterile office park and spend all their time driving. And that is why all the urban centers have really good urban transit.”

The failure of Grand Avenue, Norquist admits, “casts a dark shadow…Downtown suburban style malls all fail.” But malls aren’t doing much better even in the suburbs, he notes. The age of enclosed shopping malls with huge parking lots is dead, he contends. Norquist points to Bay Shore, which turned its back on the traditional indoor shopping mall and is thriving by recreating a main street shopping environment.

How about Milwaukee’s crime rate? Norquist gives high marks to Police Chief Ed Flynn for actually bringing crime down through community policing despite what the local media seems to report. As mayor, “I wasn’t able to get the kind of police chief that Barrett got… You can’t pretend crime away. So I give Barrett high marks for getting that police chief in.”

“The one thing I will give Walker credit for is the school choice program and the charter program that is run out of UWM and the city of Milwaukee. It has created an education supply in a city that is very attractive to families. You can come with a lot of arguments against school choice, but on the issue, did it stabilize the population in the city of Milwaukee? I think it did.”

His harshest words are directed at the Milwaukee Journal Sentinel, accusing it of pushing the idea that Milwaukee is the most segregated metropolitan area in the country.

“Milwaukee is the least segregated city in Wisconsin. The Journal Sentinel plays up the segregation in Milwaukee all the time.” Managing editor “George Stanley lives out in Germantown. He loves playing that drum. He should integrate Germantown before he opens his mouth.”

Can cities like Milwaukee survive without an infusion of money from the state and federal government? After all, with high poverty rates, how can cities support themselves? Republicans are more about cutting taxes rather than injecting money into Democratic dominated cities.

“If the Republicans want to shrink state government, that will help Milwaukee,” argues Norquist. “There is not that much money in state government that is devoted to helping poor people. It will be especially good if that means we stop destroying neighborhoods to build more freeways.”

Norquist believes the most important takeaway from The End of the Suburbs is Leigh Gallagher herself, for she is assistant managing editor for Fortune magazine, an economically conservative publication. The title might be somewhat of an overstatement, reflects Norquist. Suburbs aren’t actually going to end, but their predominance in the metropolitan landscapes is diminishing.

However, we have heard this song of the rise of cities before. It was fifteen years ago that John Norquist wrote his own such manifesto in his book, “The Wealth of Cities.” Instead of a new renaissance, as predicted, this country was plunged into the worst economic crisis since the Great Depression. Cities often fared the worst.

So is Norquist the brave cheerleader belting out support for the home team while the opposition runs up the score, or is he right this time that cities are really going to win? Is Mayor Barrett’s often gloomy assessment more realistic? After all, Barrett is on the field tackling the city’s problems; Norquist is the former mayor watching from the sidelines. Which leaves us, the public, trying hard to figure out the score.

9 thoughts on “The End of Suburbs?”