The Man Who Retired the Museum’s Debt

Milwaukee Public Museum President Jay Williams will step down in February. Can the museum build on his legacy? 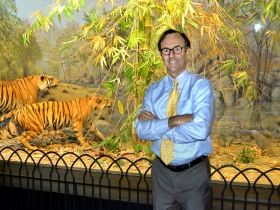 Jay Williams is crazy about museums. “My wife will tell you that you don’t want to go into museums with me,” says Williams, President of the Milwaukee Public Museum “Every time I go into a town I’m always looking for some kind of museum they have.”

Williams is explaining this as we both look over the new interactive exhibit in the China section of the museum. I did not come to look at the exhibit, but to interview Williams, who has announced he will step down as the museum’s president in February 2014.

Williams field is actually banking, but after decades in that field, he was asked, in 2010, to take on the challenging role of running the museum, the city’s oldest cultural institution. The museum was then suffering from some major financial missteps taken during the first decade of the 21st Century, and its board of directors unanimously voted for Williams to serve as president, hoping his financial expertise would help solve those money woes.

At the time, Williams was already dealing with cancer in his family including his own brief battle. And just last year, the museum “lost its shirt” on a big traveling show featuring items from Cleopatra, as Williams confessed. Yet he has persevered, meanwhile managing to broker several deals with banks — Private Bank, Chase, and M&I — that helped pay off most of a $13.5 million debt owed by the museum. Williams also worked out a deal with Milwaukee County to pay off $3 million in pension debt.

All of which makes an interesting capstone to Williams’s career, but the 62-year-old is not quite retiring. After stepping down as president, he will become chairman of the MPM board, a volunteer position that will keep him involved in what, for Williams, is a kind of playground that he loves.

And so, he couldn’t resist showing me the China exhibit. The newly opened section of it is a small window into the future of the Milwaukee Public Museum, and  Williams is passionate about each detail as well as the overall experience of the visitor. The flat-touch screen outlines all the vases, statues and plates in the LED-lit display case (compared to one nearby lit with traditional bulbs, it is a remarkable difference) that give the full story of each item selected.  Gone are small title placards next to each item on the shelf. 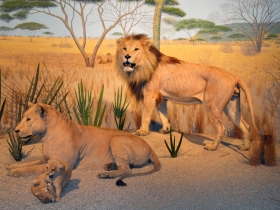 “Have you seen Simba?” Williams asks. “Do you know the story behind this one? I have to show you!”

Once again we are ambling down the winding halls in the early morning before all the other visitors arrive. Williams tells the history of the second-most famous taxidermy animal in the MPM’s history (Samson being the first), a lion that was adopted by the Cudahy-Massee expedition in Africa and brought to Milwaukee where it lived on the roof of the old museum (what is now Central Library) back in the late 1920s. As an adult, the lion lived at the Washington Park Zoo and when he died, was brought back to museum once again, to be part of a diorama.

My little tour over, Williams sat down to answer questions about the financial and programmatic issues of running a non-profit natural history museum.

For starters, give us some background on what the president of the museum does—and in comparison to your upcoming transition to chairman of the board?

Well, you have to step back and look at what the museum is—we’re both a cultural attraction and an academic and research institution. We like to talk about how we educate, explore, discover and preserve the world and its people.  So the president runs that business. Everyday, you have to make the payroll, get the attendance, do your research, stay on your academic mission—and you know we have one of the great natural museums in the country here and you’re trying to make that viable, meaningful, trying to stay relevant. You also have to be the visionary, where you’re going to take the organization because everything evolves.

On the board, you’re also being conscious of the governance responsibility.  The board is the kind of shepherd of this wonderful institution. There you want to make sure that the management is following good protocol in how they run the business. They have the right control over paying the bills and doing the financials, are you doing all the right kind of things for the type of work environment, that it’s a cooperative and collegial place of everyone in all their different interests.

Boards are interesting in the non-profit world because you kind of balance this responsibility for governance with the responsibility for fundraising. That’s just part of helping non-profits stay in business and that’s a real critical role. As chairman, you’re really trying to help the management team in the fundraising effort and probably the development of the board itself—recruiting the best board members in town to be on it. I think the biggest thing is that I would shift from the the day-to-day management of the museum to helping more on the strategy, governance, board development and fundraising.  And I would be a volunteer—as the president I’m a paid employee.

Is this a retirement or just stepping back to figure out what is next?

Well, I’m fortunate to be involved in a lot of things in town. I don’t think of retirement as not working. I’m also chairman of the board at St. Norbert College, and I’m on the board of three corporations.

So you’d be the busiest retired person anyone has ever seen.

Yeah, I like doing stuff. I like the museum and I want to stay connected with it and with our different constituents. We’ve got a tremendous amount of upside here at the museum.

Coming into this position, what was your overall goal—and maybe MPM’s board?

Non-profit is a tax status, not a business model. No matter how magnificent your mission and vision is—you still have to figure out how to run it as a business. You still have to have revenues that are more than expenses.

Oh yeah. There was a number of fundamental flaws in the business model that would not allow it to be sustainable. You had to address those issues.

How has the museum stabilized financially? What is the future for the museum’s audience, earned income and endowment money?

If you look at the finances, I relate it to the farmer. You have this farmer and his land and building is paid off but you still have to have the cash to put the crops in the ground each season. That’s kind of where we are. We have eliminated our debt, we eliminated our pension liability, we have an agreement with Milwaukee County (for some subsidy) out to 2022.  But we still have to have raise a lot of money every year. We still have to attract visitors who will pay the admission fees.  But at least now we’re in a position where that is sustainable, where that’s possible.

I don’t want to give people the impression that everything is perfect—like the farmer, you’re still betting on the crop where the weather is nice and there isn’t too much rain or too hot or cold—that’s where we are. There’s still a lot of risk with this business. You look around the country and the museum business is a challenging industry, not just here in Milwaukee.

2 thoughts on “The Man Who Retired the Museum’s Debt”