Where will Milwaukee’s future workers come from? Local business leaders have worried about this problem for many years, and the obvious answer is suggested by census statistics, which show that 44 percent of the population under age 25 in the four-county metro area is minority — mostly black and Latino.

If this is the workforce of the future, we are doing a poor job of reaching out to them within the construction trades, as a new study by the UW-Milwaukee Employment & Training Institute has found. In 2011, the study found, African Americans held less than 4 percent of the jobs in the largest construction firms (those employing 100 or more workers) in metro Milwaukee. Of 5,815 people employed, 228 were African Americans, including just 85 skilled craftsmen (compared to 2,771 whites), only 35 apprentices and semi-skilled operatives (compared to 441 whites), and only 73 laborers (compared to 431 whites).

Latinos fared about the same, accounting for just 255 workers or slightly more than 4 percent of those employed in construction trades. Latinos were also slightly more likely to be employed as skilled craftsmen than black workers.

Minority women made up just 1 percent of the employees in the largest firms, with most working as office and clerical staff.  And not one of the executives or senior managers running the largest construction firms in metro Milwaukee were minority.

“There’s been so much discussion of welding and who’s being trained for these jobs, and meanwhile here’s a whole industry that’s been ignored,” says the study’s author, ETI researcher Lois Quinn.

Randy Crump, who runs Prism Technical, a management consulting company whose services include helping companies meet diversity goals, has observed the problem for many years. “We have (minority) students from the area that have studied construction and related engineering courses who don’t consider the construction industry because they don’t have any connection to it,” he says. While some local companies offer internships, “most go to children of folks who currently work at the firm,” he notes. “So, when students graduate from architectural, environmental, construction, structural or mechanical engineering courses they look for work in manufacturing or somewhere outside of Milwaukee.”

Crump, however, believes some progress has been made. “We’ve had some talks with leadership in the major construction and engineering firms and they recognize the issue as well.”

Crump suggested the Milwaukee Metropolitan Sewerage District create a program of “externships” that would serve companies that contract with MMSD. The organization recruits, screens and provides some training of college students who are then eligible to become interns with companies who contract with MMSD. “MMSD will then host a breakfast forum and invite our contractors and ask them to consider taking on an intern,” says Peter Coffaro, the procurement and business development manager for MMSD. 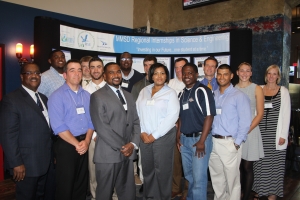 With Crump’s help, the program, called RISE, or Regional Internships in Science and Engineering, has had success recruiting female and minority students. Now in its fifth year, RISE has placed 35 students in internships, including 15 in just the last year. “We’ve been able to increase the number each year,” Coffaro says, as companies increasingly find the program of value.

At first glance, the numbers here don’t look so bad. In 2011, about 66 of 507 semi-skilled workers (including apprentices), or 13 percent of the total, were minorities, the ETI study shows. But when you consider that minorities make up 37 percent of metro area residents aged 20 to 24, the prime age for apprentices, that 13 percent figure looks anemic.

Under an executive order issued by Gov. Jim Doyle in 2005, all construction firms receiving state contracts were required to provide apprenticeship training, but Gov. Scott Walker rescinded the order shortly after taking office, in March 2011.

“It’s an industry in recovery,” Quinn notes, which would help explain the decline in apprenticeships, “but part of it is surely ending the state requirement.”

Quinn calls apprenticeships “the perfect model for a training program,” connecting technical schools, unions and businesses. The apprentices typically work in union-organized businesses and simultaneously take technical college courses. “And the skills are transportable,” she adds. “When you have an apprenticeship, employers know exactly what skills you have.”

A previous study of African American employment within the construction industry by ETI found little change, on a percentage basis, going back to 1980, even as the number of black residents and workers in the metro area increased dramatically. Experts have pointed to many causes: residual racism in unions and businesses; a pattern of family members and friends who are white getting the inside track on apprenticeships and entry-level positions; a lack of basic skills and/or a valid driver’s license and a car for some minority candidates; and high school guidance counselors who push four-year colleges even for students who would fare better with technical training.

But some companies have proven diversity is achievable. Under the leadership of Ned Bechtold, the longtime CEP of Payne & Dolan and its “sister company” Zenith Tech, the companies have had an impressive record of hiring minorities as apprentices. In 2013, 25 percent of the apprentices at Payne & Dolan and 38 percent of those at Zenith Tech are minorities, its reports to the state show.

Bechtold reportedly worked with black churches in Milwaukee to recruit apprentices. When he received an honorary degree from UWM in 2010, his work to diversify Payne & Dolan was cited. Bechtold is now chairman emeritus of the company, but the companies he ran continue to emphasize diversity.

The state oversees the apprenticeship program, and John Dipko, communications director for the Wisconsin Department of Workforce Development, notes that the Walker Administration has created a Governor’s Task Force on Minority Unemployment, with a particular emphasis on Milwaukee. “We are working with partners from business, government and community groups to remove barriers and promote long-term employment of minorities in all sectors, including in the construction industry, which was particularly hard hit during the deep, national recession,” he notes. That includes efforts “to encourage participation by minorities in construction trade apprenticeships,” he adds.

Those efforts so far haven’t accomplished much. Indeed, the picture is even worse — much worse — among the 95 largest construction firms in the balance of the state, when it comes to minority employment. Among 18, 350 male employees, just 1 percent are black, 2 percent Latino, and 1 percent Native American, Quinn found. About 96 percent of the 1,738 women employees were also white. In Milwaukee and state-wide, it’s a very white industry.