A Little Ride on the Beach

Riding south from Port Washington along the Lake Michigan beach made for a great Sunday expedition.

By Dave Schlabowske, Bike Federation of Wisconsin - Jul 19th, 2013 10:19 am
Get a daily rundown of the top stories on Urban Milwaukee

My wife was out-of-town over the weekend, so my daughter and I had planned to ride mountain bikes Sunday at The Rock in Franklin. Those plans fell apart when she woke up sick after babysitting a couple of kids with colds the night before. That door closed, I now had an open window to do whatever I wanted for four or five hours. Whenever I am looking for people to go biking with, I check my two favorite ride boards: The Facebook pages of Russell Jobs from Dreambikes and Greg Smith from Schlick Cycles. 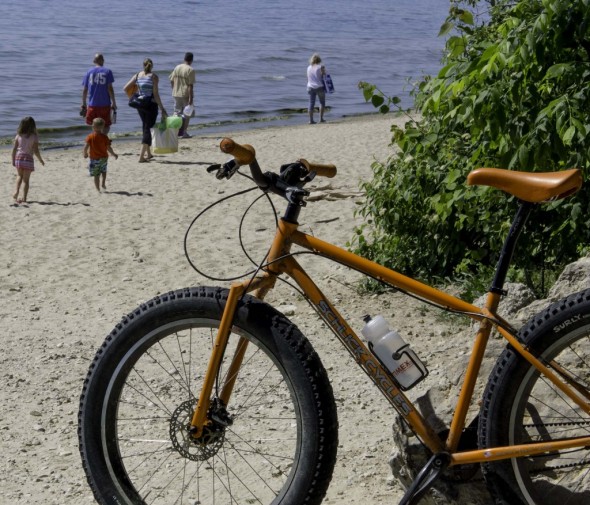 My belt-drive Schlick Northpaw, primed and ready for a day at the beach.

Dependable as ever, Russell and Coop had a 100K road ride from the West Side planned, and Greg was throwing together a last-minute beach ride in Port Washington. Since I have been too busy get a ride in on the beach yet this summer, I decided it would be cool to be cooler near the lake. I packed my Cheddar Build Northpaw, my sandals and my sun glasses in the car and head off to meet the Fat-Bike.com crew in the parking lot just south of the power station in Port. 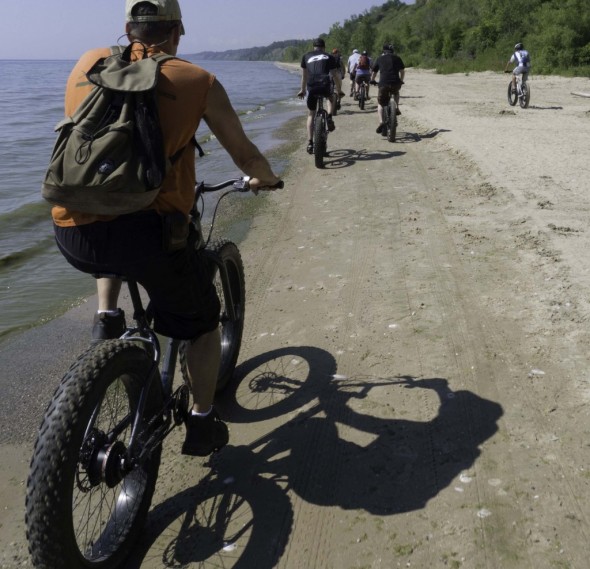 I have ridden north from the band shell in Port Washington a bunch of times, but this was my first time rolling south. The beach is a bit rougher with more rocks, loose stones, and deadfall (read opportunity to ride in the lake). The crew and I had a great time rolling south about 7 miles at a leisurely pace. We stopped for a break to rehydrate with a fizzy-yellow beverage. I also got roped into a mandatory Derby. The rules for this beach derby were simple: everyone had to ride in a tight circle between some lines in the sand and the beach. If you put a foot down, you are out. Every time a person dabs, they form a smaller circle around those still riding. The circle keeps shrinking until two riders are almost rubbing tires. In this case, it was down to Kenny and me.  Kenny started talking a little smack and lost his concentration. The meek shall inherit the beach Kenny… 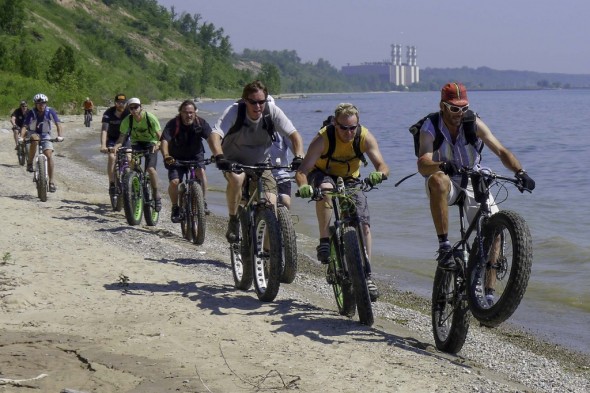 Fat-bikes are the fountain of youth, they make you feel like a kid again, no matter how old you are.

Once south of the Lions Den and Ulao Road, we figured it might be possible to ride all the way between Port Washington and the Concordia area. Can any readers testify that the route is clear? A ride from Concordia would save me a lot of driving, and the 20 mile route along the beach to Port Washington and back would be just the right distance for a good ride the next time I have a four-hour window for some recreation. 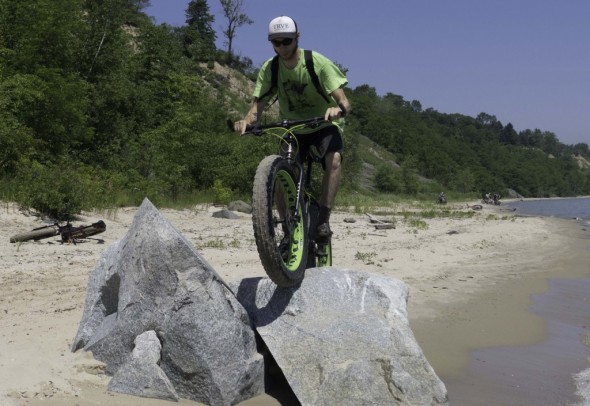 Thanks to my buddy Greg for organizing this last-minute ride. Thanks to the rest of the crew for an awesome ride. If you don’t have a fat-bike, you can rent one for the day at ZuZu Pedals bike shop in Port Washington. See you all back on the beach the next time a door closes and a window opens. Check out the additional ride coverage in this story on Fat-Bike.com.

2 thoughts on “Bike Czar: A Little Ride on the Beach”