New version of test starts in December, which require some students to start over.

By Edgar Mendez, Milwaukee Neighborhood News Service - Jun 18th, 2013 11:11 am
Get a daily rundown of the top stories on Urban Milwaukee 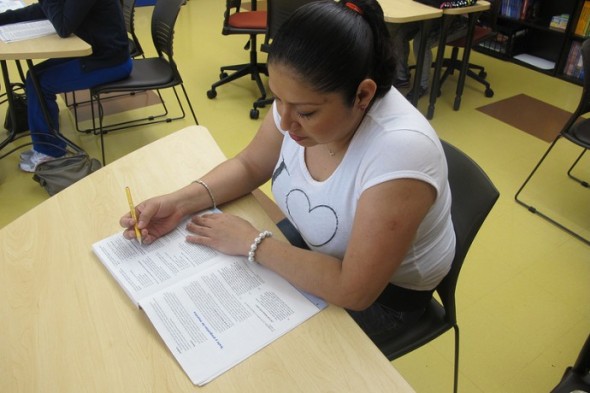 Gloria Contreras said she wants to earn her GED so she can find a decent job. (Photo by Edgar Mendez)

If you’ve passed some of the five exams for your GED (General Education Development) certificate but you haven’t passed them all, you’ve got six months to do so before the rules change. Beginning Dec. 13, the state will institute new tests for the GEDs.

According to Milwaukee Area Technical College (MATC), which administers the GED program in the city, 2,800 students are in this situation. They thought they had as long as they needed to finish the tests, but were told early this year that they will need to begin again if they don’t pass them all before the changeover.

A new version of the test, which has been computerized since last year, will kick off nationwide on Jan. 2, according to Gloria Pitchford-Nicholas, dean of the MATC School of Pre-College. The test is expected to cost about $137; currently it runs between $80 and $120, though some programs offer them for free or at reduced rates.

Tara Griffin, 24, who dropped out of school at 17, said she has completed three of five exams. She’s afraid that if she doesn’t pass the other two tests before the changes, she won’t be able to get her certificate due to the cost and the fact that she’d have to start over. She’s been studying for her GED at the YWCA for a year now.

“The impact financially is really going to be a big factor in our community,” noted Pitchford-Nicholas.

“I think that there are concerns and there’s always been concerns in terms of low-income individuals being able to pay their way,” added Patricia Adams, workforce training and education director at the YWCA, 1915 N. Dr. Martin Luther King Jr. Drive.

The new GED test will include four exams instead of five, and test-takers will need to do more high-order thinking to pass, according to Westmore Holmes, instructional chair for the HSE/GED program at MATC. The test will continue to assess whether students have achieved the equivalent of a high school education, but will comply with state and national standards as well, Holmes said. 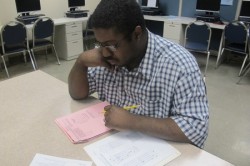 Garry Davis studies for the math portion of the GED test at the YWCA. (Photo by Edgar Mendez)

“Young folks will walk away saying, ‘this test ain’t no punk’,” he joked.

Forbes said in the past, the Journey House program required a sixth grade reading level in Spanish to enter, but in January the requirement was raised to a ninth grade level so that students would be more likely to pass the tests by Dec. 13. Reading comprehension is a good predictor of success on the GED exams, he noted.

I’ve had to turn people away but if they show up with a third-grade reading level what can I do?” Forbes said.

With half the year gone, students are feeling the pressure.

“(The changes) make things seem more complicated and makes me nervous,” Gloria Contreras said in Spanish, as she practiced for the reading portion of the exam. Contreras, who recently began taking prep classes at Journey House, said she decided to come in after seeing two family members obtain their GEDs.

“One took four months and one (took) a year to get it,” said Contreras.

Adams said the YWCA’s GED program is so popular that the lab isn’t large enough to accommodate all the students. Last year, the YWCA served more than 2,200 students and the number rises each year, she said. The YWCA plans to open a new computer lab soon that will accommodate more GED students.

Garry Davis, born and raised in Milwaukee, sat in the YWCA lab recently studying for the math test. Davis said he’d been contemplating getting his GED for a while, and after working for a temp service decided it was time.

“I think I’ll be ready in two weeks,” he said, as he thumbed through a math pre-test workbook.

The YWCA offers free GED tests for Davis and other participants who go through its preparatory program, but it’s not clear yet how the increased cost will affect them.  “We haven’t quite worked out what we’re going to do …  going forward,” Adams said.

Holmes said the new test, which will be computer-based, takes into account that prospective workers and students need to be computer savvy. MATC started offering computer-based testing in October.

“Even on the foundational level of employment people need computer skills and this test speaks to that,” Holmes said.

The Spanish GED classroom at Journey House has only one computer; the English lab has several.

Holmes is a fan of the new test. He said a major improvement is that it will provide unofficial scores instantly. The test results will be more detailed, which will help students study should they need to take a retest.

Adams also said the changes to the test are for the best. “I think it’s going to be beneficial as you look at the needs of employers.”

Griffin, who hopes to go back to school to study culinary arts one day, is committed to finishing her tests before the deadline. “It’s going to be rough,” but “I need it. I need to further my education to get a better job.”